* Please note; paper previously rejected by “The Royal Victorian Journal Of Contemporary Science” on grounds of questionable style and insufficient use of the semicolon.

In this preliminary study, conducted after Friday afternoon tea, my esteemed Colleague and myself resolved to investigate whether a stem cell, of origin I am not at liberty to disclose, but which needless to say had undergone a transfer of proteinous nature from a cell of the hairus folliculum variety, would respond to shear stress caused by gravity-mediated lateral flow of extracellular buffer in an easterly direction. The central theme of our hypothesis, such that it was, being that this procedure would persuade the hitherto shy and elusive receptro mechanum transducio, which has so thoroughly evaded the collective efforts of ourselves and others to determine its kind, would reveal itself to our electrophysiological recording apparati.

Much to our chagrin, this was not to be.

Deprived of both a PicospritzerTM and wave stimulator, which were not expected to arrive until the following Monday, we adapted our protocol and switched from the aforementioned gravity-mediated flow method to a ‘Jam – the – ruddy – plunger – into – the – buffer – syringe – cylinder – and – apply – about – 15lb – of – pressure!’-based technique; which, for the purposes of conciseness will be from hence forth and onwards referred to by the less confounding, laborious and spatially demanding term of, Brute Force.

Fortuitously, we observed that Brute Force evoked a fast inward current that rapidly desensitised in the continued presence of Brute Force (see Figure 1). 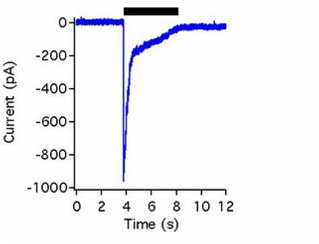 Figure 1. Current trace recorded at holding potential of -40 mV. Brute Force was applied for the duration represented by the black bar.

Considerably enthused by this radical development, we proceeded to conduct control experiments on cells that had not, hitherto, been subjugated to the protein transfer paradigm. The joviality of our mood was, however, short lived; for it transpired that the control cells replied to our vigorous thrusting with a rapidious and transientatory increase in leak current, which was of similar amplitude and candid personality as presented by our experimentally altered corpusculi. Inspection of both the control and molested cells, après stimulation, revealed that they neither were particularly thrilled by their obstreperous treatment with Brute Farce.

To conclude, these data present irrefutable evidence of a new and novel artefact, the mechanism of which, although arguably unlikely to enhance our understanding of anything in particular, may nevertheless provide a potentially intriguing avenue of research in the treatment of consumptive dropsy.

This work was supported by the laboratory swear jar, for which we thank Dr. Darius for his bountiful contributions.