Drawing ludicrous cartoons to memorize scores of gory scientific details has always been an incredible pastime for me. After all, why study off of stacks of flashcards with miniscule writing on them when you can study off pictures instead, as well as have a jolly time envisioning the crazy things you drew while writing the stressful final? And for those who firmly believe that they have no artistic ability whatsoever, rest assured that doodling, especially extremely random and ghastly-looking things, is a no sweat activity! That’s because you don’t have to be an artist to do this! You own your drawings, and they don’t have to make any sense to anyone but yourself!

That being said, the last of my ninth grade visual arts lessons have long given way to science courses like Chemistry and Biology and Physics. But by eleventh grade, reading off notes handwritten on loose-leaf became a stale way to study, so I turned instead to artistic impressions of worms with evil smiles and arched eyebrows to remember their role in the pathogenesis of humans. And now in university, there’s no end to the opportunities where I can unleash my crude artistic abilities! I say crude, because my ability to draw drooling macrophages (a kind of immune cell that gobbles up bad germs) and bacteriophages (a bacteria-infecting virus that looks like a lunar-landing space craft) is by no means sophisticated. It’s just a quick and dirty way to digest stacks of microbiology notes.

For instance, drawing cells with bullet holes all over their surfaces and twisted expressions of agony on their faces helped me remember that natural killer cells are a kind of white blood cell that secrete perforin (an enzyme that punches holes in foreign invading cells). The natural killer cell in this case would be represented by a smiley face with an vindictive, lopsided grin, ready to pull the trigger on a perforin gun. 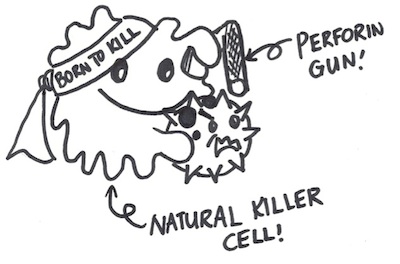 This one below features a macrophage drooling in a state of stupor, accompanied by a group of confused T cells wondering how on earth they’re going to activate it. T cells are a kind of white blood cell that can, among many other responsibilities, spot and activate awakened macrophages that have just gobbled up a bad germ. Activating it makes it more aggressive at killing and digesting the germ. And in case you wonder why the T cells are all wearing graduation caps, they’ve just “graduated” from thymus “school”, an organ near the heart where the T cells learn to be assistants of immune combat. 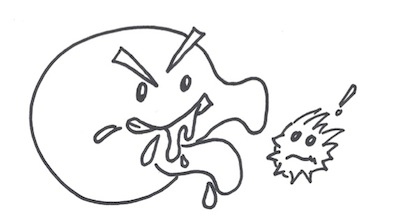 Below is a picture of some cells, depicted as bruised and weather-beaten refugees fleeing a fiery and badly inflamed warzone. It illustrates the functions of hyaluronic acid, a goopy substance found between cells of the body. Hyaluronic acid promotes inflammation and plays a role in cell migration and wound healing. Notice the ninja who comes to the aid of these wretched cells. 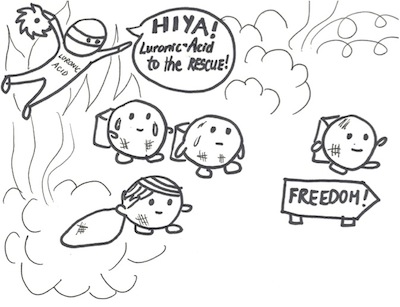 Below is a cartoon that illustrates the term “Influenza Mixing Bowl”. Pigs are often host to a variety of a influenza strains arising from humans, chickens (alas, they cannot swim very well and are not shown), and aquatic birds (depicted by rubber ducks), all living in close proximity, and therefore can “mix” or recombine these strains to make new ones that infect humans each flu season.

Here is one last cartoon of mine. Ah, the bliss of science! They abound with opportunities to doodle happy microbes or livid inflamed cells. Again, for the science student seeking an invigorating studying experience, try this for yourself! Hide the embarrassing drawings from prying eyes, or show them off to an understanding friend! 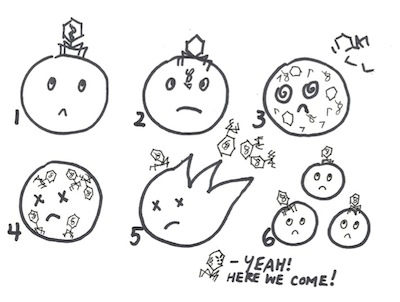