The SCQ is happy to partake in the Week of Science initiative, and will have only textbook pieces for this particular week. If you need a breather, please take a moment to peruse our humour section. That should work nicely
– – –
Brief

With the recent application of metagenomic techniques to wastewater treatment, the “black box” of enhanced biological phosphorus removal (EBPR) has been opened. Dirty limericks are included to illustrate some key points.

The Solution to Pollution is Dilution: The Old School

I once took a poo in a bucket
It smelled and I wanted to chuck it
What was I to do
With my stinky poo
Taint the environment? I was reluctant.

Wastewater is an age-old problem, as is crudely illustrated in the preceding limerick. Because of the adverse effects that wastewater is known to have on human health, the obvious solution is to get wastewater as far away from humans as possible. The ocean is a straightforward choice for wastewater disposal, and has been used for this purpose since antiquity. Modern wastewater engineering still rests on this paradigm, as illustrated by the engineer’s tool of choice for measuring wastewater strength: the five-day BOD test. This test involves measuring how much oxygen is used up by a given sample of wastewater over a five day period. The rationale behind this test is that if wastewater is too strong (i.e. it contains a lot of biodegradable nutrients), and if it is released into too small a body of water, it will cause eutrophication. Eutrophication occurs when the algae in said body of water are overfed, in which case they’ll not only consume all of the available nutrients, but in the process will consume all of the oxygen. The ensuing oxygen shortage is, of course, grievously problematic to the remainder of the aquatic ecosystem.

The five-day aspect of the five-day BOD test is hardly arbitrary. It was developed in Britain, where according to engineering lore any wastewater released into a stream or river will travel for a maximum of five days before reaching the ocean. Since the ocean represents such an enormous dilution factor, the wastewater is now effectively neutralized, particularly on paper. This “solution to pollution is dilution” method of wastewater disposal is still de rigeur in many parts of the world (for example, query the Googleweb for Mr. Floatie of Victoria, Canada)

With an ever growing global population, and the realization that water systems are not as limitless as was once believed, more stringent wastewater controls are coming into effect. The following limerick illustrates a more contemporary situation:

I once took a poo in a toilet
The environment not to despoil it
I gave it a flush
And the water did rush
Out to sea without proper employment!

Certainly the protagonist of these preceding verses would appreciate an attempt to remedy eutrophication.

One of the main constituents of wastewater is phosphorus, which originates mostly (75-85%) in detergents and excreta [13]. Phosphorus is a very important nutrient in biological systems, but because it is a limiting nutrient in most freshwater systems, it is often a culprit in eutrophication [17]. In order to prevent eutrophication, wastewater treatment plants employ processes to remove phosphorus before it is released into the environment. This can be done either through chemical precipitation with iron and aluminum salts, or through biological means termed enhanced biological phosphorus removal, or EBPR. The latter is more environmentally friendly [2], and has been implemented for over 30 years [17]. One issue has provided a caveat to EBPR as a eutrophication panacea: the process occasionally and unpredictably fails [1].

Attempts to study the process of enhanced biological phosphorus removal from wastewater have been stymied by technological shortcomings. Although a model for the biochemical operation of EBPR is well characterized [14], the identity and metabolism of the participating organisms has remained obscure, rendering the EBPR sludge a “black box” [11]. A culture-based approach to studying the process produced a red herring that persisted for thirty years: the misidentification of the causative EBPR microbe as Acinetobacter [5,4,16]. Recently, a new microbe has been identified as responsible for EBPR using molecular methods, and has been dubbed Candidatus Accumulibacter phosphatis [20,7,3]. The microbe as yet defies attempts at isolation, and thus any culture-based investigations of its metabolism are impossible. October of 2006 saw the publication of a high-profile study [9] that brought the tools of metagenomics to bear on this problem, paving the way for culture-independent study of A. phosphatis’ metabolism, as well as the possibility of its cultivation. The function of A. phosphatis is illustrated in the following limerick:

Simply put, metagenomics is the study of entire genomes, isolated from environmental samples. The four-step process of constructing a metagenomic library is explained well at the SCQ [15], so suffice to say that this produces a lot of data.

Until recently metagenomic work was impossible, not (as one may be excused for concluding) because metagenomics is an anagram for “commie agents”, but rather due to technological limits. There simply wasn’t enough raw computing power available to process the datasets that the metagenomic approach required, and it was very time consuming to sequence entire genomes. The advent of high-thoroughput (lots of data produced quickly) techniques changed this, particularly the shotgun sequencing approach used for, among other things, Craig Venter’s famous bid to sequence the human genome [18], and his application of the same technique to the microbial population of the Sargasso Sea [19]. The shotgun sequencing approach is described at the SCQ [8]: this same technique was used by Martin et al. [9] to examine the populations of two EBPR systems, with the goal of sequencing the genome of A. phosphates so that its metabolism could be better understood.

Sequencing a genome is conceptually straightforward: extract the DNA from a sample, create a metagenomic library, sequence it as explained previously with simple diagrams at the SCQ [15,8], and bingo! A dataset of code that you can now compare to databases from other sources, to see what genes you have. There are, however some intricacies to sequencing a genome from an environmental sample that bear exposition. First of all, if you have a bunch of environmental DNA, how can you tell which organism in the sample it came from?

In order to answer this question, it is first important to figure out what organisms are present in the sample. rRNA provides a handy tool for this step. rRNA is highly conserved across species, because the function of the ribosome is crucial to survival and highly specific. Thus the seqence of an organism’s rRNA genes provide a unique “fingerprint” which permit its classification. This technique can be considered crude [19], but is effective for environmental samples given the magnitude of different species found in each sample. In the Martin et al. [9] study, this technique was used to determine the community structure of the EBPR sludge, showing that A. phosphates was indeed present in the samples. These same genes served as targets for Fluorescent In-Situ Hybridization (FISH) probing, wherein labeled probes specific for known A. phosphates rRNA genes [6,12], were used to locate the A. phosphates cells in the samples and show that they constituted the majority of the biomass of the EBPR sludge.

Shotgun sequencing does not produce a continuous genome sequence, even once all of the pieces have been laboriously put back together by computer. There remain gaps in the sequence [8]. In the Martin et al. [9] study, a fortuitous community structure aided in the reconstruction of the A. phosphatis genome: the only species present in both of the two different sludges sampled for the study was A. phosphatis. This allowed for a technique called “overlap binning” to be used, where any significant amount of overlap between sequenced DNA was assumed to be from A. phosphatis [10]. This enabled the researchers to produce a more complete genome than would have been otherwise possible.

The resulting genomic data was compared with a huge resource for interpreting the genomic data: the existing genomes at the US Department of Energy Joint Genome Institute [10]. The comparison allowed the researchers to see what genes A. phosphatis possessed, which allowed them to infer what enzymes the microbe was able to produce. This data in turn was used to reconstruct the metabolism of the microbe vis-à-vis EBPR, which the reader will recall was previously impossible.

The metagenomic work by Martin et al. [9] has laid the groundwork for a new round of experimentation to optimize the EBPR process. In particular, the ability of A. phosphatis to use various carbon substrates is of interest [11]. The majority of EBPR studies take place in small laboratory scale reactors, which are fed simple substrates such as acetate or propionate as they were in the Martin et al. [9] study. This stands in contrast to full-scale EBPR plants, which receive a complex substrate: wastewater. The newly unraveled metabolic capabilities of A. phosphatis have also suggested a mechanism by which the microbe could be isolated and grown in pure culture. This work remains to be completed. 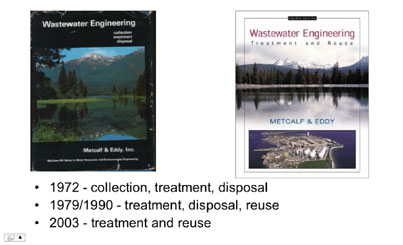 Figure 1. This textbook [17], published by the engineering firm Metcalf and Eddy, is the central text of wastewater engineering. Its changing title over the last few decades reflects the industry’s evolving values

Armed with a better understanding of what makes the EBPR microbe tick, wastewater engineers can now begin to experiment with preventing EBPR failures, using metabolic data, rather than trial and error. Humanity is moving from a paradigm which views the planet’s capacity to absorb waste as limitless, exemplified by the five-day BOD test, to one where humans must create closed-loop systems to shield the environment from harm (See Figure 1). Processes such as EBPR are crucial to this transition, and as illustrated here, biotechnology in turn is crucial to the understanding of these biological processes.

2. CEEP (2001). In Second International Conference on the recovery of phosphorus from sewage and animal wastes. Noordwijkerhout, Netherlands. 10 November 2006.