Nerve Cell City, affectionately know to residents as NCC, lies along the great Trans-Spinal Highway. As such, it is a crossroads for endless traffic, mainly in the information industry. Many of the city’s inhabitants work in this field, and keep the Highway running smoothly for the benefit of other cities along its path (see Muscleton, page 160, and Retinaville, page 392, for examples).

NCC is one of the oldest cities in the Human Body, and can date its earliest records to within a year of the Human Body’s conception. NCC is a very unusual city in this regard, as most other cities in the realm multiply and are destroyed on quite a regular basis. Residents owe the longevity of NCC to its position on the Trans-Spinal Highway, a highway of such importance that any construction along it would be very detrimental to the Human Body.

Visiting Nerve Cell City is considered by many to be a highlight on a trip to the Human Body, for its long history and cosmopolitan vibe. For travellers interested in fast-paced action, the best time to visit is when the Human Body is undergoing athletic activity. For the off-season traveler, night-time visiting will showcase the city in its quietest form.

The best place for tourist information in NCC is the Nucleus, the City Hall of NCC. Visitors can enter through one of the Nucleus’s many pores, leading through its double membrane walls. Be warned that oversized travellers may have difficultly entering a pore, as pore size is restricted to limit unwanted traffic through the Nucleus’s hallowed halls.

Once inside, travellers can peruse through the huge library of DNA, organised in the form of chromatin. The tangled chromatin is unfathomably difficult to explore, unless you enlist the help of a DNA polymerase librarian. The job of the DNA polymerases is to copy the double stranded DNA genes to make single stranded RNA molecules, which are then distributed around NCC to govern and control the city. The DNA library contains approximately 30 000 books, or genes, but no one really knows the exact number. 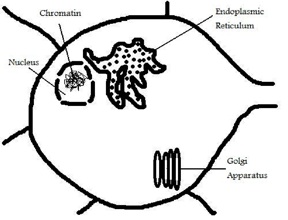 The industrial pathway is the most commonly followed path for tourists. It follows the protein manufacturing trail; proteins are produced for both export and for use within the cell. Special transportation units from the Nucleus carry the RNA library copies of the DNA into the rest of NCC. These RNA units distribute laws and instructions for protein manufacture from the Nucleus. Travellers riding with an RNA will end their journey at a ribosome station on the Endoplasmic Reticulum manufacturing strip. From there it is relatively straightforward to transfer to a newly-made protein, which the RNA blueprints and ribosomal machinery have made together.

The best way to travel to cities outside of NCC is to find a protein headed for the city membrane walls. It is a long and winding journey, and all proteins pass through a service station called the Golgi Apparatus, where the proteins are polished and made ready to leave NCC.

To travel off the beaten track within the cell, visitors can hitch a ride with local transportation, such as a ribosome or a free nucleotide. However, these local vehicles have no set destinations, so hitchhikers should be prepared to enjoy a longer, more leisurely journey. For the adventurous traveller, the cell’s excellent high speed cytoskeleton train system whisks motor protein carriages out to the axon as fast as 5 microns per second. Be aware that these motor proteins are cargo only, and the limited space is shared with other vesicles, lysosomes, chromosomes, extra cytoskeletal filaments for repair, and travellers may even come across a mitochondrion.

Nerve Cell City is one of the oldest cities in the Human Body, dating back to the Pre-Natal Era, when it separated from a Mother Cell to create two new cell cities. The Pre-Natal Era is considered by most to be the Golden Age of the Human Body, when expansion was rampant and millions of new cell cities appeared almost overnight. Since its declaration of independence from the Mother Cell, NCC has had its own share of uprisings, where some suburbs have separated and formed their own cities, but in recent years the city has settled into a stable existence.

Because of its location on the Trans-Spinal Highway, NCC has far fewer dangers than cities on the borderlands of the Human Body, such as Epithelialton and its Skin Cell Ghettos. There, the political structure is so unstable, and the populace so fast-growing, that Epithelialton is constantly splitting itself in two and creating more and more cities and ghettos. The Ghettos are sloughed off into the Great Void as fast as they bud off Epithelialton, and the inhabitants are lost to the Human Body.

The venerable city of NCC is far more stable, however, and only very rarely does the city experience upheaval and division (see History for further accounts). When division does occur, known to the locals as Mitosis, it is a time of instability and change. Despite the upheaval, the inhabitants of NCC rally together and organise themselves to carry out Mitosis as cleanly and carefully as possible, to create two cities when there was previously only one.

Some other dangers of cities in the Human Body are virtually non-existent in NCC. Other cities in high risk regions such as Stomach Province and the Bloodstream Freeway are plagued by monster invasions that can destroy entire cities. Monster varieties include the Terrible Vile Virus and the Black Bacteria Menace. Again, NCC’s prime location on the protected Trans-Spinal Highway provides security from most unwanted visitors.

The main industry in NCC, besides the internal maintenance of the city itself, is the preservation and facilitation of the Trans-Spinal Highway. To this end, NCC is formed in a distinctive shape, with a long Axon municipality stretching from the downtown core, and numerous branching cul-de-sacs of the Dendrite municipalities on the other side. Traffic flows only one way through NCC: from Axon to the Dendrites. The Dendrites of the nearest city along the Trans-Spinal Highway attach to NCC’s Axon municipality, and therefore allow for a continuous flow of traffic.

The Trans-Spinal Highway is an information highway. The inhabitants of the Dendrites of the nearest city send mail packages filled with neurotransmitters to their friends living in the Axon of NCC. These friends, upon receiving their mail, decide to open their back doors in NCC’s outer membrane city wall, and let their Ion dogs out to play. This prompts their neighbours to let out their Ion dogs, and their neighbours to do the same in turn, and a wave of Ion dogs leave NCC to play outside of the city. This wave of Ion dogs reaches the inhabitants of the Dendrites, who then send neurotransmitter mail to their friends in the next city, and the process begins again. The Ion dogs eventually come back inside the city to wait for the next chance that they are allowed to go play outside again. The whole process is known as an Action Potential, and it is the fastest information pathway in the Human Body.

The Schwann Cell Districts, collectively known as the Myelin Sheath, contain some of the most expensive housing in NCC, and the residents prefer to keep their own dogs inside when the rest of the neighbourhood is in dog frenzy. However, they do inform their neighbours on the left when their neighbours on the right are sending out their Ion dogs. This message-passing process actually increases the speed at which the information is transmitted along NCC. 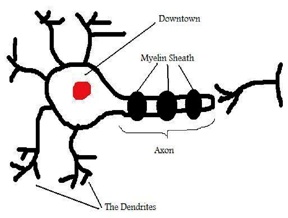 This information highway is the major industry in the city. Every other industry in NCC caters to repairing the city itself, so that NCC functions as an effective member along the Trans-Spinal Highway.

The countryside surrounding Nerve Cell City is filled with cerebrospinal fluid. NCC`s food supply is gleaned from this fluid, where nutrients from the bloodstream eventually make their way. Many other cities surround NCC, and most are very similar in layout and culture.

For the best restaurants with the freshest meals, locals and visitors alike flock to Lysosome, the hottest chain of eateries in NCC. Fresh whole produce is imported via the cell membrane wall, which gathers itself around the produce and creates a vesicle of membrane surrounding the food. This vesicle is now a new Lysosome. The produce, consisting of carbohydrates, proteins, lipids, and other goods, is sliced and diced by the top Enzyme chefs into smaller components for consumption by NCC`s inhabitants. 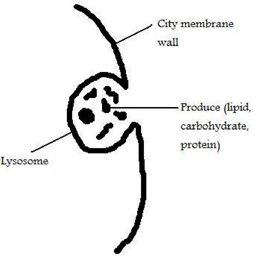 Unfortunately for party-goers, NCC is a strictly alcohol-free zone, and the inhabitants consider alcohol to be a major toxin. Occasionally the Human Body will introduce alcohol to the system, but NCC itself feels few effects from this, aside from some erratic Action Potentials. Travellers intent on partying are recommended to visit Liverville.

This is a city that doesn’t sleep, like so many in the land of the Human Body, but it does have its quieter moments. At night, NCC enters periods of low activity, punctuated by times of high industry, during which the Human Body tosses around. If you wish to have a decent night’s sleep, a day-trip tour to NCC is suggested.

(The SCQ thinks that this is a pretty neat way to showcase anatomy, and encourages others to present on other parts of the human body)