Cryonics, the technique of freezing dead rich people and their pets, is generally disregarded as a big lame waste of money by most scientists and doctors. The goal of cryonics is to preserve all cells in the body well enough such that in the distant future, after scientists have figured out how to successfully “thaw” these high-stakes ice cubes, doctors [robots? Femto-sized germ soldiers?] could take a stab at curing your previously lethal disease. Then you would be free to marvel at the brushed stainless steel landscape, the crushing loneliness, and how everyone has a cell phone in their brain and can take pictures with their eyes. You wouldn’t have those things yet, or any friends, but you wouldn’t have cancer anymore. Isn’t being a higher eukaryote grand?

No way! Every time I make a glycerol stock of my yeast cultures I shake my head and sigh longingly. Each dense little subpopulation, safely frozen away in their viscous aliquots, will eventually be given the gift of reanimation. At some undisclosed point in the future, a gob of the stock will be plated on growth media and life will begin anew.

I’d like to imagine that this is exciting for them. The generation of cells grown in liquid media would have no recollection of their ancestors growing up on solid media, and so one way of thinking about this is that, for yeast, the past is a thrilling future every time. 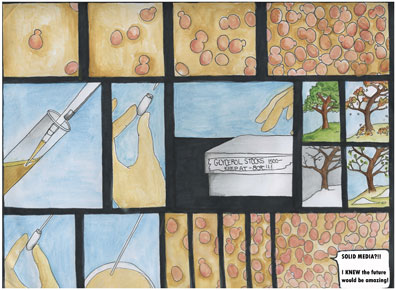