Participants: Six boys and five girls aged 13-15 years. Procedure Participants were fitted with a monitoring device validated to predict energy expenditure. They played four computer games for 15 minutes each. One of the games was sedentary (XBOX 360) and the other three were active (Wii Sports).

Conclusions: Playing new generation active computer games uses significantly more energy than playing sedentary computer games but not as much energy as playing the sport itself. The energy used when playing active Wii Sports games was not of high enough intensity to contribute towards the recommended daily amount of exercise in children. 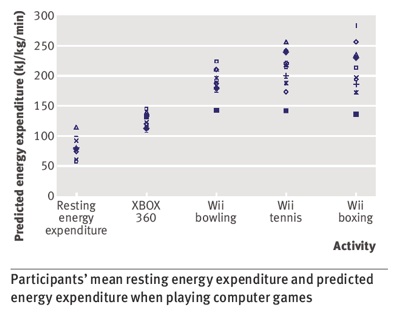