Illicit drug use is a problem that drains public health and medical resources around the world. There are many ways in which we, as a society, can deal with this problem. We may adopt: drug treatment programs in order to get drug users permanently off their drugs; harm reduction programs that have the aim of limiting the damages from drug use; or find the root causes of drug use in an effort to prevent the problem before it even begins.

One aspect of this latter approach is to identify these substance(s) that leads to more severe drug use. This approach is often referred to as the gateway hypothesis. Simply stated, when an individual uses a particular substance that individual is more likely to move on to a more severe substance. For example, it is often hypothesized that marijuana is a gateway to cocaine and other illicit drugs. In fact, this hypothesis has international evidence.

This literature fundamentally works backward from the most severe drugs to the least severe drugs. However, because of data limitations, previous research has not identified the gateway drug. In this paper, I add to this literature through the identification of the ultimate gateway drug. This identification has clear implications for theory, practice, public policy, and potential drug users around the world.

Data for this study were gathered from an ethnographic analysis of historical and foundational surveys of interviews for focus groups with participant observers. In an effort to be a part of the phenomenon of mixed methods, I wanted to have as much statistical power as possible. Because I did not want to invoke Type I or Type II error, I employed the largest sample possible to increase sample size and statistical power. According to a survey of certain tables of numbers in the back of statistics textbooks, I found that a sample size greater than 30 is equivalent to infinity. Therefore, I chose to gather a sample size of 31.

All analysis was performed within the extremely complicated regression framework that included the unintelligible maximization algorithm. Through the application of 25 axioms found within various fields of research (each with a 99 percent probability of being correct), it clearly follows that the extremely complicated regression framework using the unintelligible maximization algorithm reduces to a linear equation that can be estimated using ordinary least squares. As such, all analysis is performed in a spreadsheet.

The results of the analysis are summarized in Table 1. Clearly the results show that my results are consistent with previous research: lower level illicit and licit drugs necessarily lead to the use to more severe illicit drugs, namely cocaine. One result that is notable is that cocaine is not much of a gateway drug for cocaine use. As such, drug policy does not need to focus on “hard” drugs such as cocaine.

Table 1. Results of analysis of data, predictors of cocaine use, percent of cocaine users that have used potential gateway substance 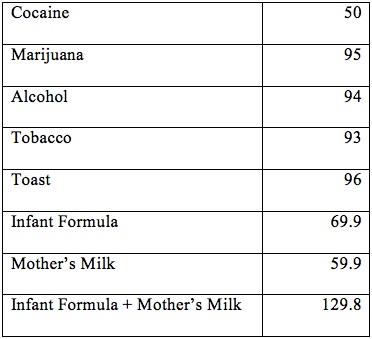 Note. All data and results represent a terminological inexactitude.

More specifically, Table 1 shows that 95, 94, and 93 percent of cocaine users previously used marijuana, alcohol, and tobacco, respectively. Obviously, all three of these illicit and licit drugs need to be banned to prevent the onset of cocaine use.

It is important to note at this point that the sampling method employed for data gathering focused on current cocaine users. In order to properly test the gateway hypothesis I would have needed data that would allow me to differentiate between marijuana actually opening the gate for cocaine use or simply a phenomenon of individuals successively moving from soft to hard drugs. However, I prefer to stick my head in the sand on this issue and assume that my data are representative of the former process and not the later.

Continuing with the results from Table 1, it is important to note that toast has been used by 96 percent of current cocaine users in our sample. This shows a strong positive relationship between cocaine use and the eating of toast. Future research is necessary in this regard to identify which form of toast has the greatest predictive power—we did not ask the participants for details regarding their toast. For example, is plain toast, butter, margarine, marmalade, or jam the best predictor? Perhaps most importantly, does it matter which side of the piece of toast has any topping?

We have clearly identified the ultimate gateway substance(s): mother’s milk and/or infant formula. Though our results are only in the context of cocaine, each and every one of our individuals had at least one or the other substance. A clear direction for future research is to replicate this study in other contexts: other places, other people, and other drugs. Despite the push for providing adequate nutrition for our infants that is supported by the World Health Organization, we as a society are clearly pushing these infants toward hard-core drug use as a result. Therefore, we must now perform a cost-benefit study to investigate any gains for our society from this adequate nutrition for infants given their greater risk of hard-core drug use and its corresponding social ills.

Mayet, A., Legleye, S., Falissard, B., and Chau, N. (2012). Cannabis use stages as predictors of subsequent initiation with other illicit drugs among French adolescents: use of a multi-state model. Addictive Behaviors 37(2): 160 – 166.