“Ay, thou art for the grave; thy glances shine
Too brightly to shine long; another Spring
Shall deck her for men’s eyes—but not for thine—
Sealed in a sleep which knows no wakening.
The fields for thee have no medicinal leaf,
And the vexed ore no mineral of power;
And they who love thee wait in anxious grief
Till the slow plague shall bring the final hour…”
From Consumption by William Cullen Bryant
– – –

Tuberculosis (TB) is a disease of global concern, and one of the oldest enemies of the human race: the records of its presence date back as far as 2400 years BC[1]. The deadly plague has claimed many lives throughout the ages, and it is still claiming more. In 1993, the World Health Organization (WHO) declared TB a “global emergency”[2]. It is estimated that one third of the world population is currently infected with TB, and the numbers are increasing by approximately 8 million annually[2, 3]. TB is the second leading cause of death worldwide and the leading cause of infectious disease mortality, contributing to more than 3 million deaths annually [3, 4, 5]. Co-infection with HIV greatly complicates matters, as it weakens the immune system and increases the susceptibility to TB infection[3]. Of those who are encounter TB each year, 0.9 million are also infected with HIV[3,6]. This co-infection is associated with an increase in the quantity and severity of TB symptoms and a faster progression to death[3]. In addition to the problem of HIV co-infection, the ongoing generation of multidrug-resistant strains of M. tuberculosis (the bacterium causing TB) which are resistant to most conventional therapies is adding to the problem. Simultaneous infection with an MDR TB strain and HIV has a very poor prognosis with an average life expectancy of only two months[3]. It is believed that TB will kill approximately 90 million people over the next three decades, and the depletion of the human resources that is a direct result of this in turn poses major economic threats to those countries with a TB epidemic[3, 5]. This calls for immediate action to develop more effective prevention strategies and therapies.

What TB does to the human body 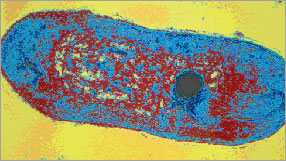 Tuberculosis is caused by Mycobacterium tuberculosis (or M. tuberculosis, see Figure 1), a slow growing bacillus which is an obligate human pathogen (i.e. it cannot survive outside the human body)[7, 8, 9]. Infection with M. tuberculosis causes latent disease in the majority of cases, which may develop into active pulmonary TB[10]. The body’s reaction against M. tuberculosis infection typically consists of strong cell-mediated immunity (involving T lymphocytes) [10, 11]. One class of T lymphocytes known as Th1 cells or CD4+ T cells release cytokines (cellular hormones) such as interleukin-12 or interferon g, which in turn enable the infected cells to engulf mycobacteria and prevent their proliferation[12, 13]. Another line of defence is provided by cytotoxic T cells (a.k.a. CD8+ T cells), which could directly target the infected cells and kill them by creating a pore in the cell wall and secreting toxic molecules into the cell[10, 13]. In addition, mechanisms exist to prevent an excessive immune response[13]. Once these mechanisms of host defense against M. tuberculosis are weakened (which could be due to a variety of environmental factors), the latent infection transforms into active disease[14]. The clinical symptoms of active pulmonary TB could be non-specific, such as fever, wasting, ill appearance, headache, and back and abdominal pain[15]. Active TB could also lead to lung abnormalities, such as cavitation, necrosis (cell death within the lungs), fibrosis and scarring, which could eventually lead to death[4]. TB can spread through the aerosol, vascular, and lymphatic routes, and therapy generally requires six to twelve months of antibiotic treatment[4, 15].

Currently, the only available preventative measure against TB is vaccination with an attenuated form of Mycobacterium bovis (a relative of M. tuberculosis which affects cattle)[6]. This vaccine was developed by Calmette and Guerin during the first two decades of the twentieth century, and having yielded positive results in animal studies, it was given to humans in the early 1920s [12]. The bacillus Calmette Guerin, as it came to be called (or BCG in short) remains one of the most widely prescribed vaccines in the world[3]. It is recommended by the World Health Organization for all infants under 1 year of age, and every year 100 million newborns are vaccinated[6]. More than 3 billion people are estimated to be vaccinated with BCG so far, giving BCG the status of the vaccine with the highest global coverage (80%) [6]. Despite its widespread application for over 80 years, BCG remains the most controversial vaccine in current use[3]. The amount of protection offered by BCG against pulmonary TB has varied greatly in different studies, ranging from zero to 80% [3, 6]. Despite this variation in different populations, there is general consensus that BCG offers good protection against childhood TB, and also against leprosy (another disease caused by a mycobacterial species) [3, 6, 12]. However, the protective efficacy of BCG wanes over a period of 10-12 years, which is illustrated by an increase in active TB cases in adolescents previously vaccinated with BCG [6]. Another disadvantage of BCG is that the vaccination leads to the development of a delayed type hypersensitivity response which cannot be distinguished from infection with M. tuberculosis, creating difficulty in the diagnosis of TB[3]. Furthermore, since BCG is a live vaccine, it is capable of causing disease in immuno-suppressed individuals, such as those infected with HIV[3].

WHY have we failed?

The great variation in the efficacy of BCG may be due to several factors. It is important to note that not all BCG vaccines are identical in their composition. There are several strain variations between the vaccines developed in different laboratories and environments and the storage and treatment of BCG may also vary in the different local laboratories[6, 12]. Furthermore, there are genetic and nutritional differences in the populations that were studied in various experiments, which could affect the vaccination outcome[6]. The role of environmental factors which contribute to vaccine efficacy should also be taken into account. For example, exposure to other environmental mycobacteria (which are more abundant in tropical climates) prior to vaccination with BCG may reduce the efficacy of the BCG vaccine[6]. A recent study has also found that chronic infection with some other parasites (such as roundworms) changes the immune response in such a way that Th1 cytokines are not produced, lowering the protection offered by BCG [6]. Moreover, factors such as the route of administration and optimal vaccine delivery must be considered when evaluating the failures of BCG [6].

In addition to these general “experimental variations”, BCG itself has several shortcomings which may lead to its low efficacy. For instance, during the process of attenuation which leads to the production of BCG, M. bovis is robbed of many of its important antigens[6, 12]. Antigens are a cell’s surface molecules which are recognized by the host’s body as potential pathogens and elicit an immune response. Several of these antigens (such as ESAT-6 and MPT64) which have been shown to elicit a strong host immune reaction are missing in BCG [6, 12]. In one experiment, a recombinant BCG vaccine was created which expressed the immunodominant antigen of M. tuberculosis, known as Ag85B. This modified BCG was found to yield greater protection against TB than conventional BCG [12]. Another problem associated with this vaccine is the type of immune response it elicits in the host organism. BCG’s ability to induce a response in CD8+ T cells has been questioned. In comparison, M. tuberculosis has been found to gain access to the cytoplasmic compartment of infected cells and thus facilitate a response in CD8+ T cells [12]. Finally, while BCG does not immunize the vaccinated individual for life, repeated BCG vaccination also fails to “boost” the protection offered by the primary vaccination[6]. It is clear that these limitations need to be overcome in any new vaccine candidate against TB.

And DNA walks in …

Thus the novel approaches for developing a TB vaccine have been targeted at eliminating the shortcomings of BCG. One method known as DNA vaccination utilizes plasmid DNA (which is a circular, double-stranded DNA often isolated from bacteria) to encode the protein of interest (which is usually a potent antigen from M. tuberculosis or a related species) to elicit an immune response in the host organism[13]. Of the 200 candidate vaccines which have been studied over the past two decades, DNA vaccines are of special interest for a variety of reasons. First, they are safe and do not have the problem of inherent pathogenicity associated with live vaccines such as BCG [3]. That means that they could probably be used on immuno-suppressed individuals without making them sick. Second, the stability of the DNA molecule may eliminate the problem of transportation associated with BCG and the necessity to develop the vaccines at local hospitals and laboratories[13]. Third, DNA vaccines have been shown to generate long-lasting immunity in several animal models[3, 13]. One of the remarkable and rather rare abilities of DNA vaccines is their strong activation of CD8+ T cells, which serves to eliminate the pathogens by directly killing the infected cells[6, 12]. Finally, plasmid DNA can be used to deliver multiple antigens by cloning different genes in the plasmid vector[3]. Studies have shown that the DNA vaccines encoding multiple antigens have a greater protective efficacy than those encoding a single protein[16]. Thus, mixing various vaccine components, which may be difficult in other vaccination techniques, appears to be feasible using DNA vaccines[16]. One strategy which has led to a longer-lasting immune response in some animal models is the use of DNA vaccines to prime the immune system, and then boosting the vaccine efficacy by using another vaccination technique[6, 12]. This “prime-boost” method has been found to offer greater protection compared to the use of repeated administration of a DNA vaccine alone[6, 12].

Towards a brighter future

Despite the recent advances in biotechnology and the successful results of DNA vaccination in animal models, the above findings must be taken with a note of caution. BCG itself has in fact been quite efficient in animal models, whereas this efficiency was not replicated in human trials[12]. Thus our first step must be to evaluate the efficacy of these different types of vaccine in a model in which BCG fails[12]. Furthermore, no single DNA vaccine has been found to offer great protection against TB. However, as we enhance the available DNA vaccines, there are many reasons for optimism. Some ways in which the potency of DNA vaccines could be increased are to modify the DNA vector to allow a greater expression of the desired antigen or more specific targeting of the antigen, to use adjuvants (i.e. molecules that elicit a strong immune response in the host) for boosting the immunogenicity of DNA vaccines, and to facilitate plasmid DNA uptake by the cells[16]. Many potent M. tuberculosis antigens have already been shown to be compatible with the DNA vaccine technology, and although the single DNA vaccine has not been shown to be much more effective than BCG, evidence suggests that multiple DNA vaccinations or delivery of multiple antigens by a single vaccine could be useful alternatives [6, 12, 16]. Since the recent biotechnological advances seem capable of implementing the necessary modifications, the strengths of the DNA vaccine may provide a reasonable hope for its successful human testing in the future[3, 16]. And maybe, maybe one day, William Bryant’s poem could be changed to something like this:

“ ’Though the fields for thee have no medicinal leaf,
The double helix comes forth with mighty power;
And they who love thee watch in disbelief
The plague’s dismal doom in its final hour.”