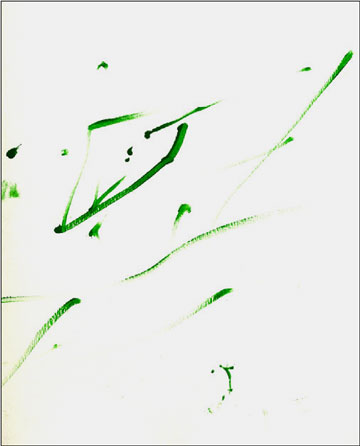 Image resulting from tree “painting” by Douglas-fir for two minutes.

Trees epitomize immobility and passivity. They are rooted in one place, have extremely long lives relative to humans, and react slowly to most environmental stimuli, so both practically and symbolically, trees are closely linked with the related characteristics of stability, constancy, and permanence. The word “tree” is derived from the Sanskrit word “deru”, which shares its roots with the words endure, hard, and continue. Spiritual practitioners often relate sitting silently in one place – like a tree — to religious leaders such as the Buddha, who achieved enlightenment under the unmoving and centuries-old Bodhi tree at the Temple in Bodhgaya. Because trees are so strongly related characteristics of reliability, many institutions – from credit card businesses to logging companies and yoga schools – use trees as their corporate logo.

Although many of these attributes can be considered positive, this very immobility makes it difficult for humans to relate to trees in an empathetic way. This distance reduces the sense of care and stewardship that humans hold for more mobile organisms, such as snow leopards, Siberian tigers, and pandas. Despite the fact that trees reproduce, transform energy, absorb water and nutrients, and communicate via chemical signals, humans tend to overlook them as interesting or important subjects for wonder or instruction. People are much more interested in – and donate more conservation funds for – mammals, birds, and other mobile organisms than for trees. An inventory of nature films produced by documentary filmmakers in the past decade revealed that nearly 75% have animals as their main target, and only 4% featured trees exclusively.

As a forest ecologist who is also dedicated to educational outreach as a means to carry out conservation and more sustainable use of natural resources, I have become concerned about the reduced status of trees as objects of understanding and concern for non-scientists. One major reason for the lack of interest in trees vs. animals may be that humans do not perceive trees as being able to move at all. People tend to “see” a whole tree as an individual, and one that is forever rooted in the ground. However, trees are modular in construction. Each branch tip and root tip grows out from a terminal bud, expanding out the form of the tree in a dendritic pattern, like tributaries of rivers, or inverted family trees. Anyone who has ever sat and watched a tree in even a slight breeze knows that each independent branch tip does move. The collective movement of all of the branch tips might constitute a considerable length over time.

I developed a simple and inexpensive way to make a permanent visual record of within-tree movement, and to quantify the distance of the collective movement at the whole-tree level. I worked with common species of coniferous and deciduous trees in the Pacific Northwest, under a variety of wind conditions, ranging from mild to moderate. Standing at ground level, I chose a single twig that was exposed to the wind. I tied the brush piece from the end of a small paintbrush to the tip of a branch (the “twiglet”) with a length of dental floss so that the tip of the brush extended a centimeter beyond the branch tip. I then dipped the brush in green tempera paint, and held up a piece of white paper so that the tip of the brush could contact the paper (Fig. 1). After two minutes, I moved the paper away from further contact with the branch. The marks on the painting constituted the “painting” created by the movement of the tree (Fig 2). 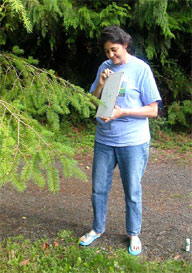 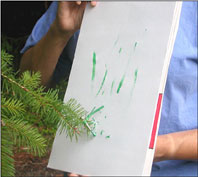 Fig. 2. Detail of painting action by twiglet of Douglas-fir tree.

Surprisingly, the image was highly aesthetic, reminiscent of paintings of China or Japan. I worked with a variety of other trees and found that each species had a rather different “signature”, based on the resilience of the twigs and the flexibility of the branch wood.

I then measured the individual length of each of the lines created by the twig, and added these up to get a collective length for that twig for two minutes (Fig 3). I then counted the number of twiglets per branchlet, the number of branchlets per branch, and estimated the number of branches per tree. I then multiplied the collective length of lines painted by the total estimated number of twiglets during the two minute time period by the number of minutes per year, and came up with a total length of twiglet movement per year. For a 30 m tall Douglas-fir (Pseudotsuga menziesii), this rough estimate was 186,474 miles per year, or over seven times around the circumference of the Earth. Thus, at the scale of a twig, a single tree is collectively moving an astonishingly long distance. This was foreshadowed by John Muir’s lovely piece about the movement of trees, in a planetary sense:

I never saw a discontented tree. They grip the ground as though they liked it, and though fast rooted they travel about as far as we do. They go wandering forth in all directions with every wind, going and coming like ourselves, traveling with us around the sun two million miles a day, and through space heaven knows how fast and far!
~John Muir 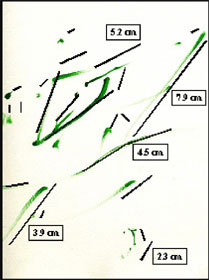 Fig. 3. Calculation of length of distance moved by individual twiglet over two minutes. Individual “strokes” were measured and then summed.

The quantitative information from the Tree Art experiments could provide insights to help understand air movements over foliage boundary layers, gas and water exchange through stomata, and other physiological aspects of trees. However, this work may have more direct impact in the realm of environmental education. The facilitation of painting by trees is an especially useful exercise for children to carry out, as it is experiential, and each child ends up with a unique image. The calculation of total distance of tree movement is a good complement to considering the aesthetic aspects of the exercise. Comparing different images that are created is a good way to explain the individuality of particular trees and differences between species.

In short, making tree movement apparent to humans can suddenly increase their empathy with trees. Perhaps people have always known at some profound level that the similarities between trees and us go beyond the names of our body parts – limbs, crowns, and trunks. However, when they witness the piece of art emerging from the limb of a maple instead of a human, their sense of recognition of the kindred natures of tree and human rises to the surface. The next time they walk through a forest, or sit in a city park and observe a tree, they may think of trees not only as long-lived shade-yielding entities that are stuck in one place, but as organisms that are capable of traveling the length of the circumference of the earth in a single month.

These ideas bring to mind a wonderful poem by Vijaya Mukhopadyay, a Bengali poet. The poem is voiced through the perspective of a tree, a tree that wants to move, and yet is scorned because it yearns to do something that none of its kind ever do. The verses express the inchoate but very real sense that all of us feel at some point when we are driven to try to do the seemingly unattainable – a tree seeking to move; a terminally ill person striving to regain health; a statesman working to resolve a conflict with peace instead of war. Trees, then, not only move; they can move us.

Continually, a bell rings in my heart.
I was supposed to go somewhere, to some other place,
Tense from the long wait
Where do you go, will you take me
“With you, on your horses, down the river, with the flames of your torches?”