The prostate is a small gland about the size and shape of a walnut situated just below the bladder and surrounding the urethra (the vessel that carries urine)(See Fig. 1). The prostate produces the seminal fluid in which sperm is transported.

A cancer arises when cells stop growing in an organized and controlled manner. Without proper control cells grow rapidly, eventually forming a tumour. This is a common occurrence in the prostates of older men. Prostate cancer usually begins as a small focus, or several foci, of cancerous cells in the periphery of the prostate 1. This is considered a Stage A disease and is asymptomatic. This early stage disease is dormant for most men; however, it can actively grow forming a Stage B disease. Further growth of the tumour leads to a Stage C disease. At this point the tumour is often still undiagnosed, although it is now big enough to obstruct the urethra and interfere with urination. Following this, metastasis occurs leading to Stage D disease [1]. The tumour spreads to the lymph nodes and bones leading to a greatly diminished prognosis for the patient.

Despite advances in the prevention and early detection of prostate cancer, it is still the most common cancer diagnosed among males in several countries including Canada [2,3]. In Canada it makes up over a quarter of all cancers. In 2001, 11.2% of men in Canada developed prostate cancer with 3.6% of men dying from it [4]. The incidence rate of prostate cancer has recently increased in many countries, especially in the United States where it rose dramatically from the mid 1980’s to the early 1990’s [2].
Many risk factors that increase the chance of developing prostate cancer have been suggested and studied; however, age and a family history of the disease are the only factors that have been established [2]. Prostate cancer has a highly correlated age-associated increase in incidence, occurring almost exclusively in men over 50 [3], which continues to rise rapidly with age [2]. Incidence begins to decline around the age of 80 [3]. Family history seems to have a similar risk factor to that seen in breast cancer. A first-degree relative of a man with prostate cancer has a 2 to 3 fold increased risk of developing the disease. This risk is further increased if the relative was diagnosed with cancer at an early age [2]. 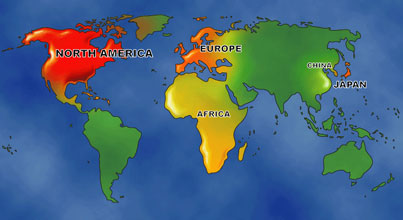 Epidemiology shows that incidence rates for prostate cancer vary geographically [2,3]. The disease is common in Western populations with the United States having a high incidence rate and Canada and parts of Europe having an intermediate rate. A much lower rate is found in central and eastern Europe as well as Asia and developing countries [2,3] (see Fig. 2). In the United States there are variations in incidence rates within the population: the black population has a significantly higher rate than the white population and the Asian population have the lowest rate [2,3]. In addition, epidemiological studies have found a discrepancy in incidence rates of Chinese populations in Shanghai compared to those in Los Angeles [3]. The same is seen with Japanese populations living in Japan compared to the USA [3]. These rate changes may point to factors that change the risk of developing prostate cancer [2].

Incidental discovery during prostate biopsies and autopsies have shown that the majority of aging men will develop the microscopic foci of prostatic disease [1]. However, in only a small portion of these men will the slow-growing tumour take on the properties of invasive prostate cancer [2]. In contrast to the clinical form of the disease, the latent cancers that can be found in most older men do not seem to vary geographically [3]. This suggests that it is the factors that lead to the progression from a latent to a clinical form of the disease that are geographically dependent [3].

Detection and Treatment for Prostate Cancer

In the early stages of prostate cancer there are no specific symptoms; however, when a man reaches his fifties it is recommended that he have regular tests to detect prostate cancer in its early stages. Basic diagnostic tests consist of the digital rectal examination (DRE) – the insertion of the physician’s finger into the rectum to manually examine the prostate – and a Prostate Specific Antigen (PSA) test – blood test to monitor levels of an antigen released by the prostate. An increase in PSA levels suggests that the prostate may have become cancerous.

Unfortunately, PSA screening is not very accurate having a failure rate of 25% of cancers diagnosed as “false negatives” and diagnoses “false positives” in 60% of tests [1]. Since the introduction of PSA testing, the average age of detection of prostate cancer has decreased by one year with a subsequent one year increase in average age of prostate related death [2]. An additional test is the transrectal ultrasonography (TRUS). This is usually only performed once a preliminary test, such as the DRE, has indicated the possibility of an abnormality [1]. This test uses an ultrasonic probe to detect cancer. The DRE and PSA tests do not give definite diagnosis of prostate cancer and the TRUS can yield many “false positives.” Therefore, if it is believed that a patient has a tumour a more definitive test must be conducted. A prostate biopsy is used in which several small prostatic tissue samples are removed for microscopic examination by a pathologist. The pathologist then determines if the sample contains cancer cells.

Once it has been determined that a patient has prostate cancer, it is important to determine how far the disease has progressed so that the best treatment plan can be initiated. TMN classification can be used to assess tumour progression. T refers to the size of the primary tumour in the prostate; N refers to the presence of the tumour in the lymph nodes; and M refers to the presence of the prostatic tumour in remote tissue. Gleason Score is another way to grade prostate tumours. In this grading system a number is assigned to each of the two largest areas of the tumour – 1 being the lowest score and 5 being the highest. Scores of 4 and 5 are usually associated with metastatic disease [5]. These two scores are then added together. A score of 2 to 4 is considered low grade, and the cancer will likely not pose a threat to the patient in his lifetime [5]. A score of 5 to 7 is a tumour of intermediate grade, and an 8 to 10 is high grade requiring immediate aggressive treatment.

Nearly 20% of men who present with prostate cancer show evidence of metastasis at the initial detection of the cancer [6]. Surgical and anti-androgen treatments can prove successful in those with localized cancer, and in approximately 75% of men it will reduce disease symptoms [7]. However, almost all will experience a reoccurrence with the possibility of subsequent metastasis. Unlike the initial androgen dependent disease, the relapsed disease is androgen independent. This makes subsequent treatment difficult, since further hormone therapy is not effective. The median survival of men with the androgen-independent metastatic disease is about 9 to 12 months [7], and at the present time there is no effective therapy for this form of the disease [6].

7. Oudard, S. et al. Activity of Docetaxel With or Without Estramustine Phasphate Versus Mitoxantrone in Androgen Dependent and Independent Human Prostate Cancer Xenografts. The Journal of Urology. 169(5): 1729-34. May 2003.