For ‘Dummies’ is a simple yet powerful publishing genre to alleviate the anxiety and frustration people feel about understanding complicated material by mocking them with insightful and educational descriptions, making difficult material interesting and easy to understand. One of the most widespread and complicated diseases affecting us today is cancer. Everyone’s heard about cancer, but how bad is it really? Super-duper bad. Canadian statistics alone state 4 in 10 Canadians will get cancer in their lifetime. That number is getting so high; almost everyone is going to know someone affected by cancer. This reality should be enough that everyone ought to know about this disease—sadly this is not the case.

The Diversity of Cancer

Cancer is the name given to a huge group of diseases of which there are over 200 different types. Cancer can attack any organ and/or any tissue. Cancer can affect people of all ages from infants to adults. All cancer diseases are marked by aggressive cells, with similar properties. They can grow and divide without any constraints, they can invade and destroy adjacent tissues, and in some cases they can even spread away from the location of origin. But what really is cancer? Cancer isn’t something you can ‘catch’. At its most fundamental level cancer is one or more cells gone wrong. It starts as a single cell in your body with a mutation in its DNA, a mutation in the ‘instruction’ manual of the cell. The mutation changes your otherwise normal cell into an aggressive cancer cell. With each different cancer type there are one or more mutations related to that diseased state. Different mutations lead to different disease outcomes. Different mutations affect different tissues. Most importantly, different mutations lead to different therapies. Without even understanding the molecular mechanisms behind cancer, the diversity of cancer is overwhelming.

Given the diversity of cancer, one might imagine the fight against cancer and the development of drug targets to cancer would be as equally diverse. It is. Just in terms of treatments there are a huge quantity options. Most doctors today rely on their mammoth arsenal of treatments to inundate cancer. Everything from surgery, radiation, chemotherapy, and/or hormone therapy is thrown at cancer in the clinic. Most of these treatments are used in combination and in particular cases. However, none are particularly curative. What targeted cancer therapy needs is a link between most, if not all, cancers. There is hope and it’s called the telomere.

The history of science is filled with mistakes–usually based on poor assumptions, which require ingenuity and imagination to overcome. The field of cancer is no exception. In very early work (before the 1960’s) scientists believed cells isolated from organisms possessed the ability to proliferate indefinitely. Of course, there were signs suggesting otherwise, especially when a few scientists noticed that cells given to them from colleagues seemed to stop proliferating after only a few weeks worth of growth. Whenever this problem was discussed, it was assumed that the growing conditions in that laboratory insufficiently represented the cell’s natural conditions, and therefore caused these cells to stop proliferating. It wasn’t until sometime in the 1960s, that Leonard Hayflick’s pioneering work challenged this assumption. Hayflick discovered that connective tissue cells (fibroblasts) isolated from an organism possessed only a limited proliferative ability and, in fact, these cells would only pass through a predetermined number of division cycles. No matter what he did, these cells stopped any further proliferation. These fibroblasts were not dead, but stuck in a state of stasis, no longer possessing the ability to divide. Hayflick’s work demonstrated that the previous assumption that all cells have an unlimited proliferative ability was wrong. In fact, Hayflick’s work lead to our current understanding of cells in which, cells possess an internal clock mechanism capable of counting the number of divisions a cell has made and stops any further divisions after a set number (Termed: The Hayflick limit).

So cells have an internal clock, what does this mean? Scientists quickly realized there was a link between the internal clock in cells, aging and cancer. The idea is, as we age our cells replicate, divide and eventually die. The older we get, the older our cells get. Infants have ‘young’ cells and adults have ‘older’ cells. This process arises through the normal wear and tear with age, termed biological aging. However, cancer cells are an exception. One of the hallmarks of cancer is its ability to grow and divide without any constraints. An internal clock would be a pretty big restraint. For all intents and purposes cancer has lost its internal clock. Without its internal clock, cancer can grow and divide forever—it’s now immortal. Cells in our body aren’t immortal for a reason: DNA damage. We know DNA damage happens all the time, and one way we’ve evolved to protect ourselves from DNA damage is the internal clock. Ideally, if a cell has DNA damage it won’t be passed on to great number of cells because there is a limited number of division that cell can make before the clock kicks in and stops any further divisions. This way DNA damage is contained to few cells. Without the internal clock cells with DNA damage expand uncontrollably. 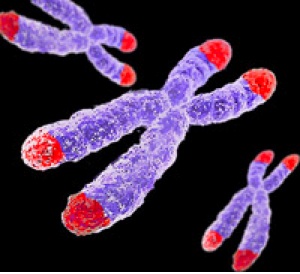 Alright, so how does cancer avoid the internal clock? It stops time. The internal clock is essentially represented by the ends of chromosomes. All chromosomes are capped by a protective end of non-coding repetitive DNA, termed the telomere. Telomeres represent the internal cellular clocks. Seen in the figure, telomeres are at the ends of all chromosomes (marked in red). As previously mentioned, as we age our cells get old. Infants have ‘young’ cells and adults have ‘older’ cells. We can measure the age of cell by the length of the telomere. Infants have long telomeres and adults have shorter telomeres. As we age, our telomeres get shorter and shorter. With each division cells go through, the shorter the telomeres get. Cells with ultra short telomeres stop dividing (the Hayflick limit). This is totally normal and leads to biological ageing. Cancer cells have circumvented this problem by stabilizing their telomeres at a given length. There telomeres stop shortening and remain at a constant length. Without the shortening of telomeres (without the clock running) cancer cells can grow and divide without any limitations. Cancer is immortal.

How does cancer maintain a constant telomere length (stop time)? Through the reactivation of an enzyme called telomerase. Telomerase is a regular enzyme not active in most cells (with the exception of germ cells) reprogrammed to work in cancer cells. Its main function is to lengthen telomeres. It attaches to the ends of chromosomes at the telomere and elongates this protective cap. Essentially, cancer cells stop time and never get old. By elongating or maintaining the telomere size the cancer cells maintain their immortality. 90% of all human tumors have activated telomerase, confirming their immortality. Telomerase and immortality are the strength of cancer. No matter what treatments and therapies we bombard onto cancer, as long as one cell with this immortality survives the cancer will persist. Almost every cancer type utilizes this up-regulation of telomerase. From the time this was discovered, scientists and doctors have been attempting to target cancer through telomerase. Telomerase is one of the only constants between almost all types of cancers. Instead of hundreds of therapies for hundreds of types of cancers—we could be looking at one type of therapy for all types of cancers.

Targeting telomerase and/or the telomere itself isn’t easy and it won’t happen tomorrow. Nevertheless, telomere/telomerase therapies might be the future and ideal targets for a global attack on cancer. Drugs that posses the ability to interfere with telomerase would revert cancer cells back into a finite replicative potential. Telomere shortening with age would resume (the cellular clock would start again) and telomere length would be lost as the cells continued to divide. Eventually, the Hayflick limit would be reached and the cancer cells would stop dividing. Several pharmaceutical companies are currently conducting clinical trials involving telomerase inhibition and telomerase vaccination. Interestly, the structural modification of the telomere seems to be a more robust and decisive cancer killer than inhibition of telomerase alone. Structurally modifing the telomere blocks the binding of telomerase to the protective cap, thereby inhibiting it’s lengthening abilities. If telomerase can’t lengthen the telomere then it can’t stop the clock. One of the most promising structural modifications to telomeres that inhibits telomerase is caused by guanine—guanine base pairing. This is a specialized form of DNA pairing called G4 DNA. G4 DNA causes a structural change in the telomere resulting in a protective cap that is no longer recognized by telomerase. Current and future cancer therapies will take advantage of G4 DNA. If we can stabilize G4 DNA in cancer cells, then telomerase will loose the ability to lengthen the telomere and cancer cells will eventually die. The frontier of cancer therapies will be to specifically target cancer cells with drugs that have little to no side affects on the surrounding tissues.