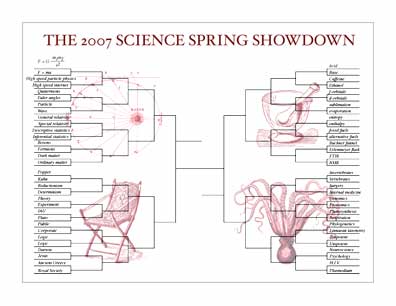 BEN: Welcome, Ladies and Gentleman to the 2007 SCIENCE SPRING SHOWDOWN – the thinking person’s ccomplement to the NCAA tournament! Sponsored by the fine folks at ScienceBlogs Basic Concepts. That’s right people, it’s the dance, and we’re here at the World’s Fair bringing this to you live. We’re about ready to give you that first exclusive look at the 2007 brackets. Over to you Dave.

DAVE: Sure thing Ben. The conference tournaments are now officially complete. Yes, the selection committee has made all the tough choices about who will get in and who will not. The teams have now been placed into their spots. So right now is about when you can all start grumbling about which teams were robbed, and which teams are simply undeserving.

BEN: Big time, Dave, it’s huge! Let the griping begin! We’ve opened the lines and we wanna hear from you. What do YOU think about these match ups? Is this just about right? Or does it make about as much sense as a taco in a Chinese restaurant?

DAVE: And don’t forget, we wanna hear the most important thing. That is, the thing that counts the most in everyone’s mind: who’s gonna take this baby all the way to the end?

BEN: Who is gonna win? There’s a strong field of contenders in the mix this year. Just take a look at the line ups. I think the Southeast Regional is looking particularly strong. And a lot of surprises here – who would have thought that Team Sublimation could have even made it. And what about Logic playing itself? Mind-boggling, perhaps. We’re not sure. We don’t get it.

BEN: Indeed. Should be a nice setting. Plus, with the Eastern regionals way over at CERN, in Switzerland, that’s just plain unusual. But that’s another element to the controversy here with some of these match-ups, like logic on logic.

DAVE: Yep, what a total shock to me, Ben, and I know Vitale is noodling over that one — no-one saw it coming. And these pairings are really only the tip of the controversy iceberg. So here we are — this SHOWDOWN is primed and ready for great drama. Even Team Jesus is getting in on the action (won their conference tournament, so it was an automatic bid). Those guys just seem to be nothing but drama these days, and was it me, or was Jesus freakin’ everywhere this year? They will certainly be a force to be reckoned with.

BEN: And so folks, before we sign off, note that everything will begin on Wednesday, when we break down the four regions into their own posts and you, the blogosphere and beyond, will discuss the games and comment on who you think will be the winners and the losers. First round winners will of course advance to the second round. And then second round winners will meet up in the Sweet Sixteen. We can’t guarantee that the pace of this vaunted tournament will precisely match that of the NCAA, but damn, if we not juggling more spherical objects than just a lowly basketball (and that’s the truth!). Anything else, Dave?

DAVE: Yeah. Basically, the lesson for this initial post is simply this: download the bracket (PDF | JPG), print out, and fill it out before the end of Wednesday. Game on, people!