We started a new unit in my grade 12 biology class yesterday, on the mechanisms of inheritance. I wanted to impress on my students how the recognition of DNA as the code for life pervaded and altered the public consciousness. In a century that had already seen (and would later see) more history-changing events in science than perhaps the previous two or three centuries put together, DNA still stands out. I even suggested that the DNA double-helix might be the most recognizable scientific icon of all time [1].

So, I started out the lesson by telling them about my favourite artist: Salvador Dali.

Dali was a Spanish artist who lived from 1904-1989. He was a surrealist, which, to me, is essentially realistic representations of unrealistic subject matter. The subject matter itself is representative of something, but that depends on the painting and the artist. Another interesting definition says that surrealism is a mistranslation of the French surréalisme. In fact, surr- in French is not the same as surr- in English (where it is similar to the sub- prefix, from the Latin “below”, or to put it another way, “less than”). Surréalisme really corresponds to superrealism (as in “more than”) [2].

Dali’s catalogue is comprised of over 1500 paintings. Besides this, he also did a lot of work in photography, dabbled in sculpture, and even film (he even worked with Walt Disney on an animated short that was finally released in 2003, called Destino). I’ve always enjoyed his work, purely for aesthetic reasons. But I’ve since come to appreciate him as an individual of voracious intellectual appetite, and sublime insight. He was interested not only in individual lives, but in politics and society, and even our relationship to the universe.

I sometimes think that our modern lives, so highly dependent on high technology, and plagued by so many modern crises only solvable through scientific insight and analysis, are yet significantly more divorced from science than the world of 30 years ago. It seems like people don’t care anymore about understanding anything, least of all science. Our society’s scientific underpinnings have become so taken for granted that many people are now entirely blasé. This could be simple cynicism on my part, but when’s the last time someone besides science geeks like myself got truly excited about a recent development in science? [3]

Well, the 20th century has seen some major conceptual changes in our understanding of some of the most basic things we took for granted, and further, some of the applications of science have fundamentally altered the world as we know it from that point forward.

When Einstein published on special relativity in 1905, he showed that time (as well as space) was not an absolute, universal quantity, but was dependent on the observer, specifically, it was relative to one’s frame of reference, or the speed at which one was travelling relative to another frame of reference. In 1915, with the publication of general relativity, he further showed that gravity is a curvature of spacetime, and that in higher gravity, time also slows down. This has since been confirmed experimentally countless times, to increasingly astounding precision.

Although Einstein achieved an unprecedented degree of recognizability amongst the general public for a scientist, I don’t believe his theories became instantly well-known to the average, non-technically-trained individual, but at least among the intelligentsia, including the art set, his ideas made some major waves. Still his most well-known work, Dali’s Persistence of Memory documents the warping of one of the fundamental pillars of reality, time itself. 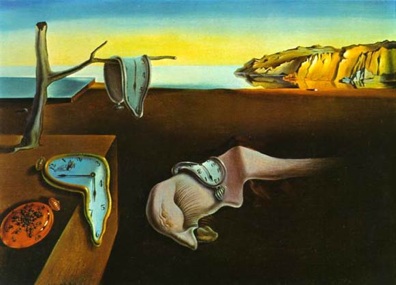 Einstein’s theories on space and time are not only interesting but necessary to many fields of theoretical, experimental, and even cutting-edge applied physics, but for most people, at least until we’re all travelling to other planets at near-light speed, or living in major gravity wells, time dilation, and other relativistic effects, don’t seem to be a part of our everyday experience.

But one of those effects, relativistic mass, turned out to be very relevant to the everyday citizen. In an addendum later in the year to his 1905 relativity paper, Einstein showed that, since mass is relative to one’s velocity, but simultaneously, velocity is also related to one’s kinetic energy, there is something called mass-energy equivalence. In fact, Einstein even came up with the world’s most famous equation to show exactly what this equivalence was. E=mc2

40 years later, the top Allied physicists saw the fruits of their labours. They figured out how to tear apart matter at its roots, and inside the atom, just as Einstein said they would, they found energy. Practically boundless energy. And in Hiroshima, then Nagasaki, over 100,000 people died in two separate, short moments. Dali made a painting of it. 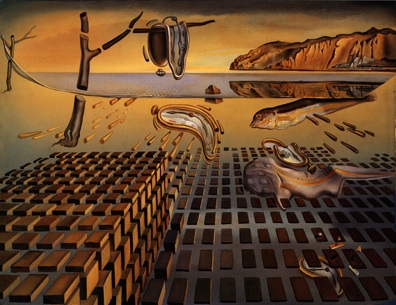 Called The Disintegration of the Persistence of Memory, it shows us relativity with a vengeance. While hearkening back to his earlier Einsteinian ode, Dali’s new painting simultaneously depicts the end of the world as we know it. If even the atom itself, whose name means “indivisible”, is not safe, what is left to us? The apparent fragmentation of our image of reality, where all absolutes seem to crumble, parallels the loss of security and permanence in everyday life in the post-war era. Imagine the sense of vertigo after two cities are wiped off the map with a weapon of god-like power.

Notice also the imagery that I interpret as shattered pieces of previous laws of science morphing into purposeful bullets. Here, at the advent of the Cold War, a weapon is poised that could annihilate its target, but only while irrevocably altering the world and the future. For another 40-odd years after this, the world will live in a constant hair-trigger stand-off, waiting for nuclear armageddon. No hope from humanity, no hope from science. This wouldn’t be the last piece by Dali to feature the horrors of nuclear war as a subject.

But even as physics was radically changing the world, so was biology. By the late 1940s, it was determined that the chemical ingredient in the chromosomes that carried an individual’s genetic information, the so-called code of life, was a particular kind of molecule called deoxyribonucleic acid. In 1953, scientists were finally able to figure out what it looked like. And the discovery captured the public imagination, both the elegance of the thing itself, and the significance it had. An article in Nature calls it “the Mona Lisa of modern science”. 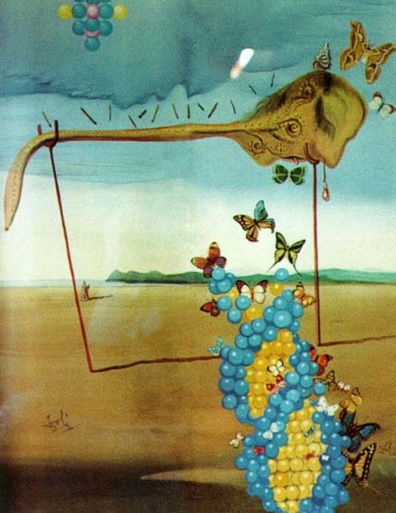 Butterfly Landscape (The Great Masturbator in Surrealist Landscape with DNA) shows Dali’s take. Though this was the first, created only a few years after Watson and Crick’s announcement of the double-helix, DNA would show up in many of Dali’s future works. As the agent of creation, it is perhaps easy to see why butterflies spring from the iconic structure in this painting. But it also seems that Dali used DNA to symbolize not only creation, but the greater idea of God, and this may be why some of the molecular structure is visibly jutting from the clouds.

Just as physics dominated the public imagination for more than the first half of the century (through radio, the discovery of the atom, nuclear weapons, spaceflight), biology also fought for attention, and eventually took centre stage. The elimination of smallpox in the 1950s seemed to suggest an eventual defeat of all disease, and genetics also opened up a whole new world of wonder, as flights of fancy suggested all manner of exciting (and sometimes frightening) possibilities. Dali was as entranced as anyone.

Salvador Dali created a large body of work, and certainly took inspiration from a myriad of different topics, only some of which were in the realm of science. But I’d like to emphasize that these representations of major 20th-century events discussed here aren’t isolated forays into the world of spacetime and molecules either. He had something to say on any number of subjects: history, politics, science, art, and even the future, and you were as likely to find scientific iconography in his works as religious symbolism, political figures, or any combination of the above. 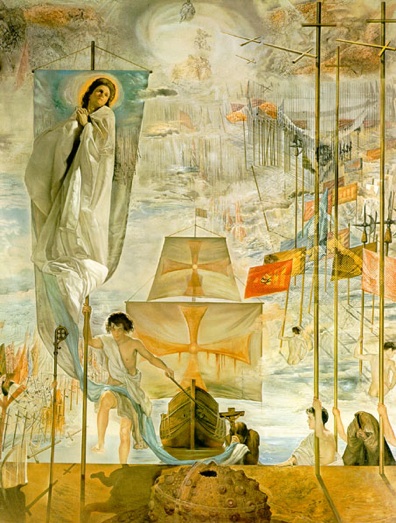 This piece, The Discovery of America by Christopher Columbus, depicts a young, saint-like version of the Spaniard, almost floating onto shore on the light of heaven, depicting his delivery of the true faith to the New World. But notice also a rocky, almost alien shell-like creature, seemingly out-of-place in the picture, sitting at the forefront, which Dali later agreed was representative of future planets that America would colonize, in the same spirit as Columbus himself. This painting was done in 1958, one year after the launch of Sputnik, the first man-made satellite.

Dali drew on such diverse inspirations as quantum mechanics, catastrophe theory, calculus, genetics, and certainly many more scientific subjects that I simply haven’t come across in his works yet. He saw an eloquence and an aesthetic appeal in scientific theories just as he might in poetry or philosophical tenets. He didn’t discriminate. He also saw the relevance and importance of science in our everyday lives, and held it up to criticism as he might any other field.

Our world might be a better and more enlightened place if all of us dropped the whole supposed left-brain/right-brain dichotomy and opened our whole minds to the full realm of human imagination as he did. The art world, the humanities world, the science world — ultimately we all live in one world, and it’s worth trying to understand each of the perspectives in it [4].

2. I should also note that surrealism was an all-encompassing artistic and philosophical movement, much like post-modernism, and not limited only to painting.

3. Maybe Dolly the sheep, but that’s basically it since the first moon landing.

4. If you’re interested in exploring some more of Dali’s perspective, a good place to start would be Virtual Dali, which has some several hundred selected works of decent viewing quality. Other, more complete collections may serve better as a reference, but not for browsing.