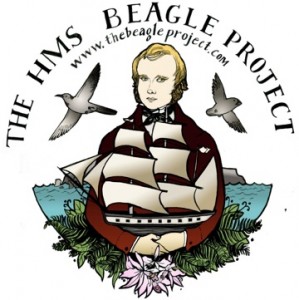 My wish was to be buried in the Churchyard at Downe. Now I find Mr Huxley, thumbing his nose at the Queen for refusing me a knighthood, arranged to have me planted in that mausoleum Westminster Abbey. He knows I hated London. And burying an agnostic in such a place is carrying whimsy just a little too far.

So I was delighted when a mob of angry biologists and historians broke into the Abbey one night and removed my remains with a view for a quiet burial in the village I loved. But no. Someone called Dawkins had a better idea. I don’t remember corresponding with him. Maybe a friend of that ghastly man Marx who kept sending me those books. Did he come to anything?

Anyway, I woke up in a thunderstorm, a bolt in either side of my neck, Dawkins on the phone saying, ‘there’s another book in this!’ My re-emergence into society in my bicentenary year has caused something of a stir, not least to myself.

Those of you who have actually read my writings (as in not just provide opinion on them) will know that I am a retiring man, not much given to attending either science or society functions. But I could not resist an invitation to visit my old friend, the Beagle. As I wrote not long before my first death, my time aboard her was the most important event in my life: without her I would have become a clergyman.

So we took the train down to the coast and there she was. A brand new HMS Beagle, sitting alongside trim and pretty as though she had just been launched in 1820. My heart gave a lurch (which worries you, when you have died) when I saw her again. The decks were clustered awaiting my arrival, and the welcome I received was embarrassing.

Still. the moment I stepped aboard, I felt the clammy sweat, the salivation of my old nemesis: seasickness. I suffered it for five years and frequently wished myself dead. Some observant soul saw this: ‘I know how you feel. Every time we go out I’d throw me ring up if I didn’t take these.’ He handed me two tablets. ‘Or you could always eat some jam.’

‘Do preserves cure seasickness?’ I asked, amazed. ‘No, it just tastes nicer when it comes up.’ I shall have to catch up with the new humour, I see. But it was good to be made game of: I am a bearded man who has been resurrected from the dead, but I am no God.

The upper deck was much as I remember leaving in 1836: the wheel with Nelson’s immemorial words: ‘England expects every man will do his duty’. The Captain – he did not have Fitzroy’s haughty bearing – saw my affectionate glance at the helm and in an exasperated way said, ‘If that was today, Nelson would have to say “England expects every man will fill in a risk assessment.” Anyhow, look at this.’ The inanimate piece of glass sprang into colourful life. ‘GPS.’ I raised an eyebrow. ‘Global positioning system. It uses satellites 22,000 miles above us to calculate our position to the nearest ten feet. It has charts for the whole world.’

‘No more sextants?’ I asked. The daily taking of sights at noon and of shooting the altitude of starts was a great ritual every day aboard the old Beagle. ‘Oh, I still have mine, and my requisite tables. Sometimes, the electrics pack up.’

‘So the whole of the world has been charted? And they are stored in this small grey box?’

‘So no more casting weighted lines?’

‘No, Mr D. And here.’ The display changed again. ‘Radar. It paints a picture of the land and sea around us. We can see boats before they appear on the horizon, can sail safely through fog and storms.’ It looked like paintings my little Frankie used to do after Emma had been a little too free with the alcoholic tincture of laudanum. She used to give that a lot for colds. With so much changed, I suppose science will have found cures for such simple ailments by now.

My old stern cabin was very different to the one I shared with Stokes and King. Cramped still, but with cabins and…what did I feel? The captain had the shame to shuffle his feet. ‘Heating,’ he mumbled. ‘Air conditioning, too, when it gets too hot.’ A click and an electric bulb glowed
into life. I had seen these in a house, but on a boat. ‘And that?’

‘You haven’t heard of iPods, then?’

‘Something to do with plant reproduction?’

The captain shook his head and vanishing down a set of ladders told me to ‘mind my head’. My 200 year old knees cracked a bit. Age had stooped my frame, but still in the bowels of the ship, I had to hunch, and what a different sight to the stinking, rodent infested hole I had last seen in 1836.

‘Engines. 440 horsepower, folding propellers, push us along at eight knots when there’s no wind. And generators provide mains electricity for all you scientific types – the stuff you lot need – and 24 volts for the boat.’

Fitzroy sailed us around the world and I wrote The Origin of Species without electricity, I mused. We crouched as we walked between rows of gleaming boxes and hoses. ‘Diesel and water tanks. Freezers. These are for food, these are for your metagenomics samples.’

‘Don’t tell him about that! It’ll kill him again!’ A voice yelled from behind us. ‘We’ve got to get him up to speed with the peas first….’

Moving past the captain, I confronted the hovering woman in the white lab coat. ‘What’s this about peas?’ I asked. And so, standing in the hold of HMS Beagle I was given a brief introduction to the science of genetics. Well, well. It seems monks are good for something after all – transmitting variation from one generation to the next. Not that monks do that, I mean.

Anxious not to delay my host, I emerged again into the main deck, now lined with small comfortable cabins, very different to the hammocks of my day. In between the cabins, a table was bolted to the floor. ‘Lab space. We’re doing what you did, Mr D. we’re going round the world, sampling the seas, looking at how the world’s changed since you saw it, how the rainforests have been cut down, the glaciers have melted, where the species have moved to, how many have gone extinct. A lot of the people here are doing it because of you. A lot of ‘em read the Voyage, the Origin, and that’s why they’re here.’

I felt humble that my work on this little ship had touched so many. And a pang of envy. Their breathable waterproofs. Heated cabins. Running water. Hot running water. Next I will learn that they will not have to wait to arrive at shore to communicate with the rest of the world. Maybe they are even able to identify specimens without consulting a museum or book!

The captain excused himself. ‘We need to be off, we’re taking a copy of your first edition of the Origin across the Atlantic to Harvard.’ He slapped the mainmast. ‘Give her a good try out before we go off round the world. Been a pleasure to have you aboard. Bit of a headwrecker for me, mind. I hope,’ he shuddered, ‘they don’t dig up Fitzroy and do the Frankenstein on him, bring him aboard. God, could you imagine that? Having the old skipper aboard too? But you know you’re welcome aboard. Anytime.’

The crew shook my hand one after another in a most civil manner and the captain saw me safely over the gangplank, and promptly started bellowing – as captains will – about starting engines, getting ready to slip. As my feet hit dry land, I was met by an attractive young woman, a species I have always liked. ‘Hi,’ she drawled, took my arm and walked me towards a car. ‘Yah. I’m Jocasta your agent for media-facing events. Oh, God look at you, we’re going to have to do something about that beard. We’ll have to book you in for a makeover and get your colours done, I’m thinking autumnal: you’re doing the all the TV breakfast shows tomorrow morning. Darling, you’re going to be huge. But Charles Darwin. A bit old, Victorian. Our branding people have been brainstorming and felt Chaz D…’

I tore myself from her grasp, opened my hand , gulped down the two seasickess pill I had been given and with a sprightliness surprising in a 200 year old, cantered up the gangplank. ‘You did say any time,’ I reminded the captain, ‘my science is a little rusty, but I think I can be of some use.’

The HMS Beagle Project aims to launch a replica of the HMS Beagle, an icon of scientific progress, for the bicentenary of Charles Darwin’s birth in 2009. She will circumnavigate the globe in Darwin’s wake, crewed by aspiring scientists and researchers. They will carry out original research both at sea and on land, updating Darwin’s observations, breaking new scientific ground and relating the adventure of science to enthuse a new generation of young students. If you support this vision please visit www.thebeagleproject.com for details on how you can help.