To eat cheezies or not to…spontaneously combust, that is the question. A recent trip to the West Chilcotin for field work elicited a Cheetos™ snack craving and a subsequent binge on Cheetos Puffs™. You know the ones they make your fingers and everything else they come into contact with orange and a pasty orange at that I might add. During this junk food binge (whereby I set out to devour a bag of Cheetos™ the size of my upper body) friends informed me that Cheetos Puffs™ make a better fire starter than a lunch substitute. I was appalled and declined a demonstration at the time to ensure every last Puff would be consumed by me and not by fire.

Well, a few weeks later my curiosity got the best of me and I began to ponder the idea of using the beloved Cheeto Puff™ as a fire starter. I mentioned the idea to a couple of people I know here in Vancouver and was asked whether only Cheetos brand cheezies would suffice or if I thought that maybe our own Canadian brand of cheezie, Hawkins Cheezie™, would work as well. I decided that I must know the answer to both of these questions. First, can Cheetos Puffs™ and/or Hawkins Cheezies™ really double as fire starters? Second, if they do in fact burn which Cheezie takes the cake or the cheese in this case as a fire starter?

I promptly set out to purchase both brands of combustibles…I mean cheese snacks. I found both at my local grocery store. Upon my return home I equipped myself with matches a key component in this research and headed out to the concrete pad at the front steps of my apartment. I first opened the Cheetos Puffs™ and…ate only one, well OK two. I then lit a match and reluctantly put it to the next Cheeto out of the bag. At first nothing happened but as I held the match to the Cheetos Puff™ for a few seconds it began to slowly ignite and burn. Sure enough the Puff did pouf in a puff of smoke and flame. Next I opened the bag of Hawkins Cheezies™, I was sure the claim that our Canadian brand was made with only 100% real cheese would limit its potential as a comparable fire starter. Again I held a match to the Cheezie and sure enough it ignited and began to burn and then it began to burn brighter and bigger until a flame twice the size of the Cheezie itself was achieved. I began to wonder if I should have a fire extinguisher near by. I also began to wonder if my neighbours would think I had gone absolutely mad when they saw me burning Cheezies on my walkway. In the end our crunchy, all Canadian, real cheese contender burned brighter and bigger and longer than the American competitor, the Cheetos Puff™ (Figure 1). 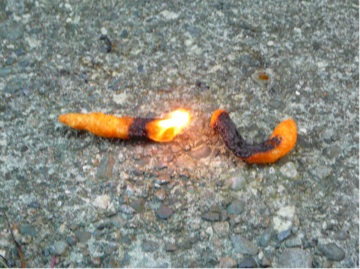 So now the question is: Why do these beloved cheese snacks burn? A quick review of the product label and ingredient list reveals some interesting facts. Both snacks are made from corn. Yes, I know this was an exciting surprise for me as well and actually the Cheetos Puff™ is made from cornmeal enriched with such things as iron and B vitamins. Thoughts of health food began to run through my mind until I realized that they were talking about a deep fried, cornmeal paste entity that is similar to the coating on a corn dog. Yum! So of course the next ingredient in both cheese snack brands is vegetable oil. Eureka (well not really)! But at least, Houston, we have…ignition.

Now that explains why our beloved snacks burn. Oil saturated, log shaped, compressed (or puffed) cornmeal entity plus flame equals fire. However, one problem still remains. Why does the Canadian Cheese out compete the American Cheese in this war of fire starters? The answer lies in the fundamental Laws of Thermodynamics, or the study of energy.

Another look at the product labels (Figure 2) and few minor calculations show that in a single 50 gram bag of Hawkins Cheezies™ there are 22 of the little snacks per sack compared to 29 Cheetos Puff™ in the same 50 gram bag. Hence, a single Hawkins Cheezie™ is actually heavier and denser and than the Cheetos Puff™, so apparently mass and density matter when it comes to fire starters. 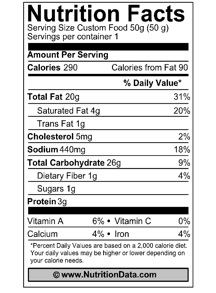 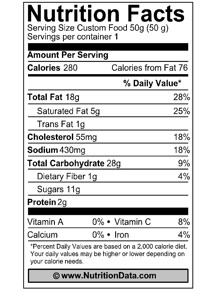 Here’s the why? A quick review of some Thermodynamics basics reveals that a single Hawkins Cheezie™ weighing in at 2.3grams on average has more potential energy or stored energy than a single Cheetos Puff™ which only weighs in at 1.7 grams on average. Once set on fire the conversion from potential energy into kinetic energy (or energy in motion which in this case is fire) translates in to a bigger bang for your cheese with the Canadian coming out on top. That’s the why of the longer burn. The brighter burn according to Fire Experts (ref) is the result of fat content which is the fire starter fuel or the flammable substance in the Cheezies. Even though one serving of Cheetos Puffs™ has 2 grams more fat than a similar size serving of the Hawkins Cheezies™, the Hawkins Cheezie™ still has more grams of fat, .62 grams, per individual ‘cornmeal entity’ than the Cheetos Puff™, which has .53 grams of fat.

Now at the risk of being a bit cheesy or corny if you prefer we can summarize our findings as such; the all Canadian Hawkins Cheezie™ beats the American contender Cheetos Puff™ in a rivalry to determine who is the best fire starter based on the fact that Cheezie for Cheezie the Canadian has more Potential Energy (stored energy) according to the Laws of Thermodynamics which translates into more Kinetic Energy (energy in motion) than the American.

So remember, if you go out in the woods tonight, bring along some Hawkins Cheezies™ as your fire starter. And hey they can double as a good wholesome fried cornmeal snack in case you get the munchies. Yummy!