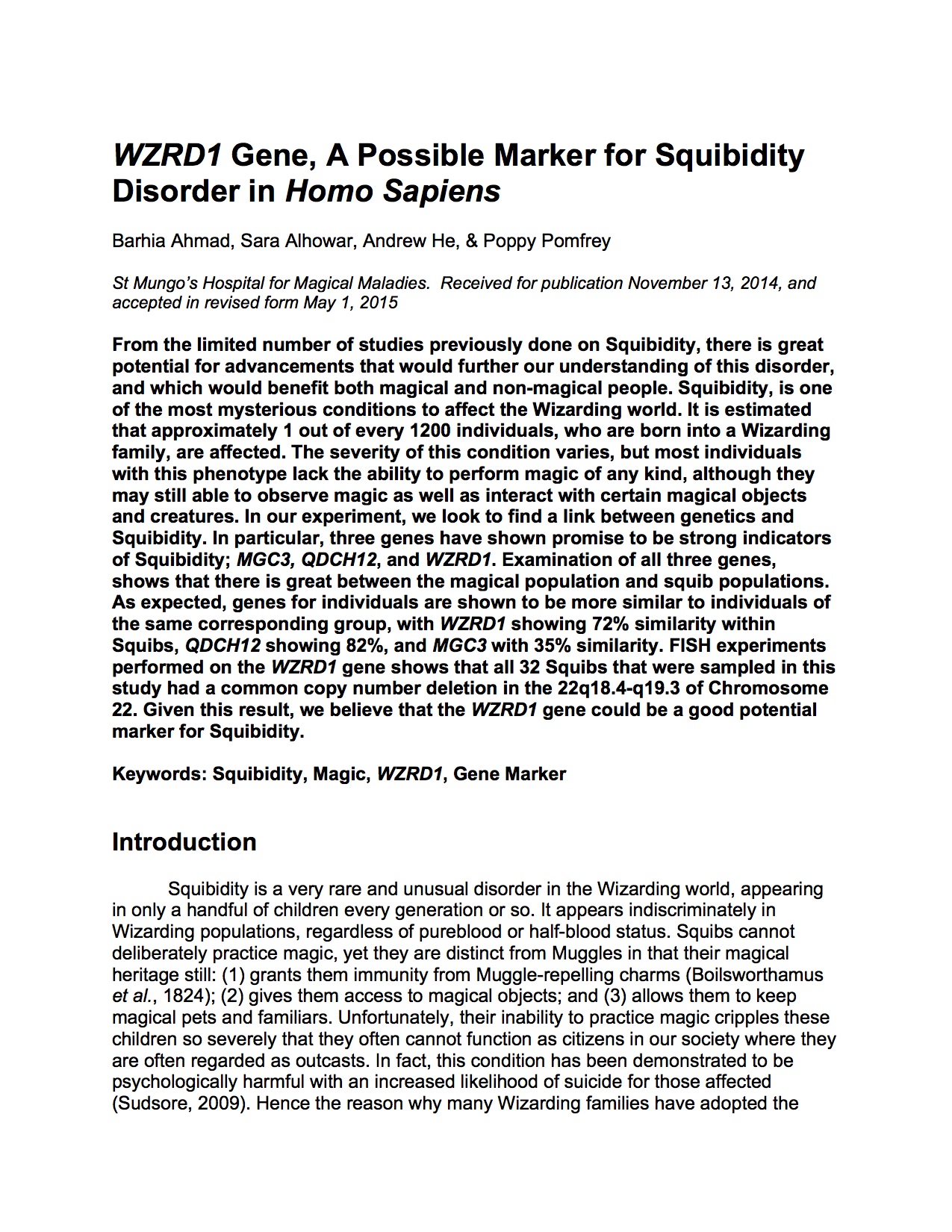 From the limited number of studies previously done on Squibidity, there is great potential for advancements that would further our understanding of this disorder, and which would benefit both magical and non-magical people. Squibidity, is one of the most mysterious conditions to affect the Wizarding world. It is estimated that approximately 1 out of every 1200 individuals, who are born into a Wizarding family, are affected. The severity of this condition varies, but most individuals with this phenotype lack the ability to perform magic of any kind, although they may still able to observe magic as well as interact with certain magical objects and creatures. In our experiment, we look to find a link between genetics and Squibidity. In particular, three genes have shown promise to be strong indicators of Squibidity; MGC3, QDCH12, and WZRD1. Examination of all three genes, shows that there is great between the magical population and squib populations. As expected, genes for individuals are shown to be more similar to individuals of the same corresponding group, with WZRD1 showing 72% similarity within Squibs, QDCH12 showing 82%, and MGC3 with 35% similarity. FISH experiments performed on the WZRD1 gene shows that all 32 Squibs that were sampled in this study had a common copy number deletion in the 22q18.4-q19.3 of Chromosome 22. Given this result, we believe that the WZRD1 gene could be a good potential marker for Squibidity.

Today, the Wizarding world was set abuzz over a recently published paper released from Hogwarts School of Witchcraft and Wizardry. The study on the heritability of Squibidity was funded by the Society for the Support of Squibs. This organization was founded in 1890 by Idris Oakby, a well-known Squib supporter who was rumored to have been a Squib herself. The research was done by Madam Pomfrey with help from some of Hogwarts’ senior students. In their study, they looked to find specific genetic markers that could be used to successfully predict whether a person of magic would be affected with Squibidity and, the likely heritability of the disorder in future generations. In their research they came across three genes named MGC3, QDCH12, WZRD1 that were strong candidates as genetic markers for the presence and/or severity of the disorder.

However, the community has become heavily divided over the controversial research done on Squibs and their genetic characteristics. One feeling is that this is a great first step in Squib research and could lead to valuable advancements in the field, benefitting both magical and non-magical people. Parents appear to be especially relieved and hopeful at the prospect of reintegrating their estranged Squib children back into Wizarding society. However, others see this as sympathizing with mud blood traitors and express fears that in the long term this could lead to a dilution of magical potency in the populace.

Extremists from both sides have begun to gather at the offices of the Ministry of Magic to protest their opinions on the matter. From what we understand, the magical community is demanding a response from the Ministry on the topic of Squib research and its future in science. So far, no statement has been given and very little effort has been made to quell the swelling mobs. Many expect that the Ministry will release a statement as soon as tomorrow morning, but as to what they decide for the future of this field of research is still up in the air. The Society for the Support of Squibs has also yet to weigh in on the situation, although, one can assume they are in full support for the furthering of Squib research (as their name suggests). In recent reports from the SSS, there have been two suspected Squib births in the past four years, seven confirmed Squib cases in the past two decades, and twenty-eight registered Squibs with their organization. Those who support the study of Squibs say that this could be a very promising venture that could benefit both populations by allowing us to more thoroughly understand the underlying mechanism responsible for Squibidity, and therefore magical ability.

Among the most vocal of these supporters are the Weasley family and the Dumbledore family, both of which have been rumored to have Squib family members. On the opposing side are the Blacks, Lestranges and Malfoys; many believe that research into Squibs, no matter what the benefits, is traitorous and should be banned. The general consensus is that Squibs are not a part of the magical community and should not be allowed to influence those who practice magic naturally. They feel that by allowing Squib research to continue, we leave ourselves open to the risk of developing a “Squib cure” which would result in rampant mixing and polluting of the greater magical gene pool with that of the tainted Squib gene pool. The Malfoy family has been adamant in their statements that “in order to preserve bloodlines that are truly deserving of the power to wield magic, we must reject all Squib research just as we have rejected Squibs themselves.”

With the future of Squib research on everyone’s mind, both sides of the magical community anxiously wait for a response from the Ministry of Magic.