Many profits in the supplement industry are generated by making exaggerated claims about their products. Despite the popularity of such supplements, few are very well researched and the industry itself isn’t well regulated. In fact, one popular pre-workout stimulant, Jack3d, was recently banned in the United States because it contained an illegal dietary supplement, dimethylamylamine (DMAA), that has been linked with the development of cardiovascular problems.

Creatine, however, is a popular supplement used for increasing muscle development and athletic performance that has been well-researched and has been consistently proven to produce these effects. Its effects can be explained by basic biochemical principles. This article will also touch on the ethics regarding supplementation.

Creatine, derived from the Greek word for flesh, (kreas), was first discovered in 1832, when Michel Eugene Chevreul extracted the compound from meat. Its anabolic effects would be confirmed in humans in the early 20th century when it was found that supplementation increased creatine content in muscles. Supplementation didn’t become mainstream until the 1990s when two Olympic gold-medallists credited creatine as part of their success. By 1996, an estimated 80% of athletes at the Atlanta Olympics were using creatine too. The significance of creatine supplementation and the subsequent increase in muscle and athletic performance must first be prefaced with an introduction to some general metabolic concepts.

Creatine is used to regenerate adenosine triphosphate (ATP), the “universal currency of the cell”. Many metabolic processes in the body, such as the ones involved in sprinting and weightlifting, have energy requirements. Essentially, ATP is the money that employees, the chemical reactions, are compensated with. When the employees don’t get paid, they won’t do work; similarly, if there isn’t any ATP, the chemical reactions involved in muscle contraction won’t occur.

ATPs unique capacity as a vehicle for energy transfer can be explained by its molecular structure. ATP is a molecule consisting of an adenine, ribose, and most importantly, a triphosphate unit. The bonds between the phosphate groups store large amounts of energy and are what makes ATP so effective. When a chemical reaction demands it, one phosphate bond is cleaved in ATP and energy is released, driving the chemical reaction to proceed. 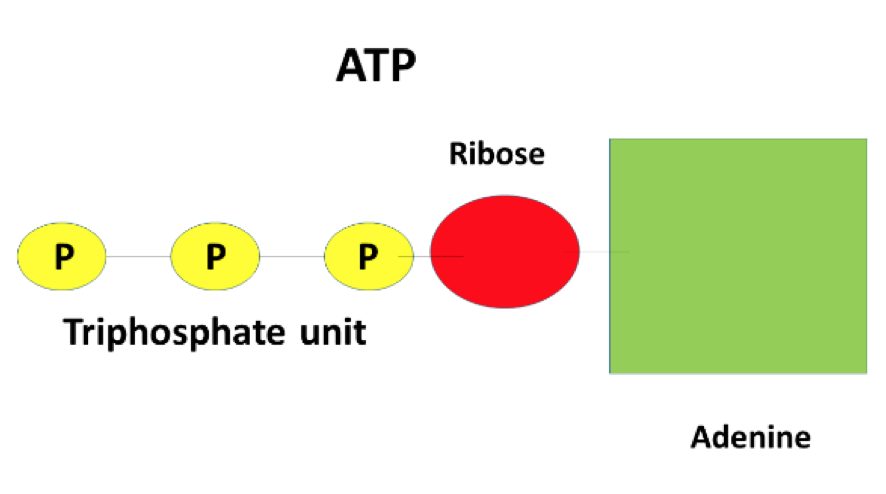 The reaction can be represented chemically as:

Hydrolysis, the insertion of water into ATP, causes the release of three components: adenosine diphosphate (ADP), which is ATP without one phosphate group, inorganic phosphate (Pi), the one phosphate group that is released during the reaction, and energy, which is utilized by the cell. Conversely, the chemical synthesis of ATP from ADP and Pi is condensation, the removal of water. ATP is generated by various metabolic processes in the mitochondria and is used at various sites throughout the cell. 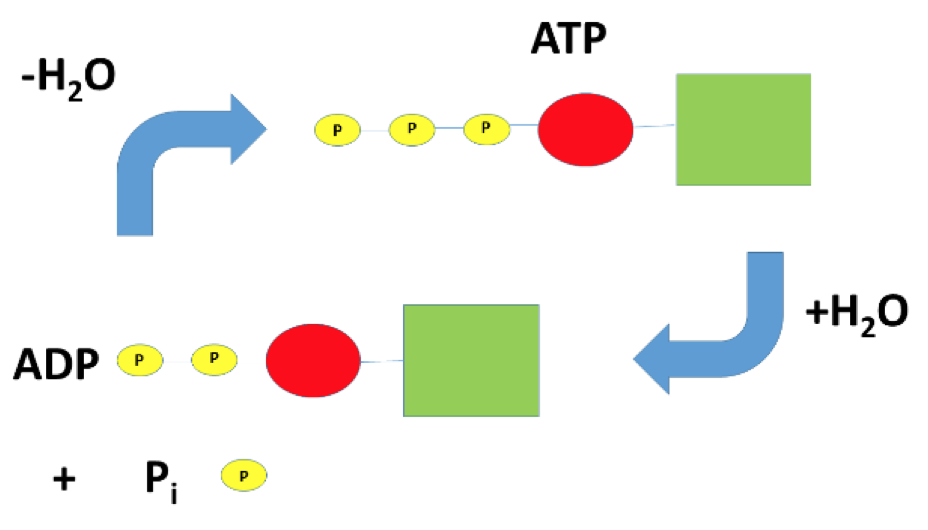 With all this said, it would make sense for the body to have massive reservoirs of ATP; however, this isn’t the case. In reality, skeletal muscle only stores enough ATP to power a couple seconds worth of high-intensity exercise. As a result, ATP needs to be either replaced or resynthesized on an ongoing basis in muscle. Creatine can replenish these stores of ATP, and that is the basis for why it is used as a supplement.

Creatine can be phosphorylated in a similar way to ADP. The process is mediated by an enzyme called creatine kinase. The enzyme generates creatine phosphate from ATP in the mitochondria, making phosphocreatine and ADP. Since ATP is limited in the cell, creatine acts as a holder for high-energy phosphate groups similar to a bank account. After transfer, ADP stimulates further metabolic processes and the generation of more ATP. Creatine phosphate, however, migrates to muscle fibres. As ADP is generated from muscle contraction, creatine phosphate regenerates ATP allowing for further contraction according to the following reaction:

Creatine is naturally occurring compound that is largely synthesized in the liver at about 1g/day, however 95% of it is found in skeletal muscle. It is also obtained from diet, primarily from meat and fish. Large amounts of meat and fish would need to be consumed to obtain gram quantities of creatine, so supplementation is a practical alternative. Of the creatine in muscle, 60 – 70% are phosphorylated and the rest exists as its free form. Despite its ability to rephosphorylate ADP, its usefulness is limited to short-term, high-intensity exercise as it’s been shown that its effects may decrease as the length of time of the exercise increases.

The following part of the article will include two summaries of research investigating the effect of oral creatine supplementation using creatine monohydrate, the most commonly used form of creatine. Research has consistently found that supplementation taken concurrently with resistance training leads to the greatest increases in strength, however responses to supplementation can vary from individual to individual.

Arciero et. al investigated the effects of creatine supplementation over a 4-week period in combination with resistance training. 20 g of creatine was initially taken per day for the first five days of the study, then tapered off to 10 g per day for the remainder of the study. “Loading” creatine supplementation, where larger amounts are taken within the first couple days of supplementation, has been found to cause the quickest increases in muscle creatine concentration; however, this step is not necessary because similar muscle creatine concentrations can be obtained over a longer period of time with smaller dosages.

This was the first study to demonstrate that creatine supplementation with a well-designed resistance training program produced greater maximal strength increases than creatine alone. It should be noted that all groups, including P-RT, significantly increased their maximal strength, however Cr-RT had the greatest increases. The authors suggested that the results can be explained by previous research that found increases in resting creatine concentrations and rate at which phosphocreatine is resynthesized between sets following supplementation. These results are not unique, as Rawson and Volek have also found similar positive effects of creatine supplementation during weightlifting tasks in 17 of the 22 studies that they reviewed in 2003.

Some adjectives which have been used to describe creatine, such as “performance-enhancing” and “muscle-building”, have naturally produced discussion about its ethics and the possibility of its supplementation providing an unfair advantage. Some organizations have even made the argument that creatine supplementation would influence an athlete to experiment with other supplements or drugs, even going as far to place creatine in the same category as anabolic steroids and other banned substances.

Further, creatine supplementation is not banned by any organization as of a 2007 review article in the Journal of the International Society of Sports Nutrition, but the National Collegiate Athletic Association (NCAA) does prohibit its distribution, along with other muscle-building products, to its athletes but does not ban its use independently.

Creatine has been found to be a legal and safe dietary supplement that aids in athletic performance and strength development and its effects are maximized when taken in conjunction with resistance training.

Clark, J. Creatine and phosphocreatine: A review of their use in exercise and sport. J Athl Train 1997, 32, 45-51 and references therein.