Have you ever wondered what life would be like with no skeleton? Or how your body goes about maintaining such a complex structure? Without it you would be no more than a mound of wobbly flesh and skin, and yet you have likely never given it a moment’s thought. However, the science of skeletal physiology has led to one of the major advances in medical treatment in the past decade. This article will show you how your body maintains a living, breathing [1] skeleton, how things can go wrong with it and how new medications work to treat a large number of diseases. Most importantly it will demonstrate how study into the basic processes by which the body works can end up solving real problems for people in the clinic.

Firstly, we need to cover some basics of bone physiology. Any organism that has aspirations to move freely within its environment or grow larger than slime has to have a scaffold for its body. Insects make use of an exoskeleton (“exo” meaning external), while fish make use of cartilage to provide their endoskeleton (“endo” meaning internal). Vertebrates possess a complex structure consisting of minerals of calcium and phosphate (such as hydroxyapatite), proteins and cells.

Our skeletons have several functions, the most obvious of these being mechanical support, providing a fulcrum for muscles to pull against, as well as giving the body structure and strength. You probably also know that the marrow space in your bones provides a home for the cells that make the various components of your blood: red cells (erythrocytes) to carry oxygen, white cells (lymphocytes) to fight infection and platelets to help with clotting. Also living in the marrow are the stem cells that give rise to fibroblasts, (which make collagen for the connective tissues), adipocytes (fat cells) and the cells of the bone itself. As well as this, the bones are central to the metabolism of calcium and phosphate: 99% of the calcium in your body is in your bones, so they could hardly be unimportant. Maintaining a precise level of calcium within your blood is essential to survival; too little or too much calcium will make the heart unable to beat [2]. By releasing or taking up calcium in response to regulatory hormones the bones act as a ‘sink’ for this essential mineral.

There are three types of cell that maintain the skeleton. The first is the osteoblast, which acts as the body’s construction worker, toiling away to maintain the structure by laying down new bone where it is needed. Osteoblasts take minerals from the extracellular fluid around them and form new bone matrix onto the microscopic surfaces of the bones. As this process occurs, some osteoblasts become entrapped and form osteocytes. This type of cell goes on to live for a long time within the bone, communicating with the outside world by means of fine filaments. The exact function of osteocytes is not clear, but they most likely act as sensors, communicating information about stresses and strains to the other cells. 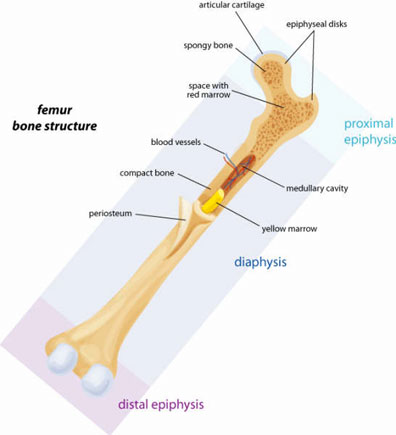 The last type of cell is the osteoclast, and these are the cells that resorb bone. They are large multi-nucleate cells that are very highly specialized. They resorb bone by migrating to the bone surface and creating lacunae (dish-shaped cavities). By releasing acids and enzymes, they degrade the minerals and proteins that make up the bone matrix and then move on to another part of the bone. The most important thing to remember is that they are the only cells in the body that can resorb bone [3].

These three cell types, sensors, constructors and resorbers4, work in harmony to maintain a healthy bone structure. Indeed the function of osteoblasts and osteoclasts is intimately intertwined, with each cell releasing factors that influence the other. Osteoblasts rely on the osteoclasts to resorb bone in front of them. As the bone is resorbed the osteoclasts release cytokines (signalling molecules) that attract osteoblasts and encourage them to start laying down new bone. The osteoblasts then incorporate small proteins into the bone structure that they create. Once that bone is resorbed by osteoclasts again the proteins are released and act as signals to the osteoblast to return and lay down more bone. This tight coupling of formation and resorption is necessary to prevent a chaotic bone structure from forming. 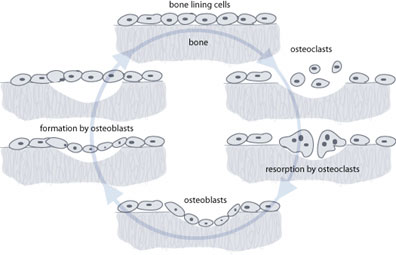 Your body puts a lot of energy and resources into managing this continual turnover of bone. It is estimated that at any one time 1% of your skeleton is being replaced, and the equivalent of your entire skeletal mass may be replaced every 10 to 25 years. This is not for growth or increase in the size of the bone; a child’s bones lengthen by a process called enchondral ossification at specialised growth plates.

The first reason for the constant replacement is so that your bone can adapt to different stresses that are placed on it, thickening in areas that are under great load. This ability of bone to respond to environmental loads is known as Wolff’s law, named after the person who initially described it. Another reason for remodelling is so that the bone is able to resist fatigue stresses. Repetitive stress on any structure will cause it to fail (just try bending a paper clip twenty times) but through continual remodeling, the bone is able to repair microfractures before they have a chance to propagate and cause fracture of the bone as a whole. A side-effect is that the bone is able to respond quickly to demands for calcium by the body.

By far the most common imbalance in this process is a progressive loss of bone mass [5]. Loss of bone density is known as osteopenia, one cause of which is osteoporosis [6]. Osteoporosis predominantly affects women, usually in the later stages of life. The imbalance of resorption and formation is only slight, but over a lifetime it can amount to a very large loss. It is unclear why some women develop osteoporosis and others don’t, but the causes are certainly a mix of genetics and environment.

Prescription drugs are another potent cause of osteopenia. Long-term treatment with corticosteroids such as prednisone can result in significant bone loss. Some anti-epileptic agents can have a similar but less severe effect. As with all medications, the risks of taking them must be weighed against the risks of not taking them. A good physician will not only be alert to these risks but be able to monitor for them if necessary. Estrogen can also affect bone loss and this should be taken into account with hormone replacement therapy. This sensitivity of bone density to estrogen probably explains the increased risk of osteoporosis in women as compared to men.

Other processes can cause localised bone loss. When cancer spreads to the bones it needs space to grow and is able to recruit osteoclasts to absorb the bone around them. When a joint replacement starts to wear out, the resulting inflammatory reaction can also cause significant bone loss.

The common path for all of these processes is the osteoclast, which makes it an ideal therapeutic target. Stop the osteoclasts and you’ll stop bone resorption no matter what the stimulus.

Fortunately some compounds have been discovered that are able to interfere with osteoclast function. These drugs are known as bisphosphonates, and represent one of the biggest clinical success stories of the past decade. Bisphosphonates are characterised by having two carbon-phosphate bonds (P-C-P). Although 300 of these have been synthesized since they were first discovered in 1865, only 6 are commercially available for use in humans. They are the “-dronates”: etidronate, alendronate, pamidronate etc. Although they all have different pharmacokinetics [7], their mechanism of action is the same.

Through these mechanisms they are able to slow down the resorption of bone, and may even tip the balance back so far in favour of the osteoblasts that the lost bone is replaced. Because they get incorporated into the bone itself they have an extremely long lasting effect, potentially up to ten years. They have a surprisingly small range of side-effects, gastrointestinal upset being the most common. There have been some concerns about giving such long-lived compounds to young children, but so far no problems have been observed.

Bisphosphonates have now been used extensively in clinical medicine. The most striking result has been in children with osteogenesis imperfecta, a disease which results in markedly brittle bones. In the past these children would have suffered multiple fractures and maybe had several operations. With the use of these drugs to stop the resorption of their bone, the need to operate on these children is now rare.

In breast cancer patients, these drugs have been used when the cancer has spread to the bone (metastasis). These metastases can not only be painful in their own right, but can weaken the bone enough for it to fracture. They have been shown not only to reduce the rate of fracture in these patients, but also to increase life-expectancy. Bisphosphonates are widely used in osteoporosis treatment. Trials are also underway for using these drugs in cases of loose hip replacements.

The most interesting part of this success is that it arose from an understanding of the fundamental biology of bone. By understanding how the body maintains this structure at a cellular level, scientists have been able to find ways to correct the imbalances when things go wrong. This has allowed physicians to use these drugs to help people with a wide range of ailments.

Of course, it is not always that neat, and it is still not understood exactly how many drugs work at a molecular level. What is known is that they do work and what their risks are. Indeed, the above description of bisphosphonates is somewhat simplified. But the point remains that it is through the investment of time and resources into basic science research today that advances in medicine will come tomorrow.

1. Yes, a breathing skeleton. The cells in the skeleton have to take up oxygen and release carbon dioxide, just like all the other cells in your body.

3. In fact, in medical circles it is often said that the only two things that remove bone are osteoclasts and orthopaedic surgeons, although I would add amateurs armed with equipment such as lawnmowers and chainsaws.

4. The best way to remember which does which is osteoBlasts Build the bone.

5. Some children have a defect which causes relentless increase in the density of the bones. This is known as osteopetrosis and thankfully is quite rare.

6. This may seem pedantic, but it is important to remember that osteoporosis is just one cause of bone loss. To clarify we use osteopenia to refer to the phenomenon of bone loss, and osteoporosis to the specific disease entity.

7. Pharmacokinetics is the way the body and the drug interact in terms of absorption, breakdown and excretion.