(Also available as a pdf file)

* * *
Abstract: We used directional microphones, professional electronic audio recording equipment and personal observation to monitor the accumulation of large woody debris in old-growth forests of northern Wisconsin from June 1999 through July 2001. We hired a really poor undergraduate student to collect nearly 20,000 hours of audio/video tape in really cool areas in the Chequamegon and Nicolet National Forests. Then we made the poor bastard watch all of the tapes and record the fall of large woody debris. Observation times and decibel values for events were correlated with field reconnaissance of the actual debris. Results show strongly that if a tree does fall in the forest, and no one hears it, it does indeed make a sound. Surveys also showed that out of state recreationalists mispronounced ‘Chequamegon’ in 75% of cases. Wisconsin residents mispronounced the word in 62% of cases, mainly due to alcohol induced slurring.
– – –

Large woody debris plays and important role in stream habitat for fish, macroinvertebrates and thinking spots for “half-pint” from Little House on the Prairie and Pooh (Milne 1948). Little data exists monitoring the actual accumulation of debris, including whole trees, on the forest floor (Robison and Beschta 1990). For centuries, humanity has pondered the question “If a tree falls in the forest and no one is there to hear it, does it make a sound”(Cockburn 1988).

Many researchers have attempted to solve such philosophical debates but have been proven unsuccessful. An attempt to determine why the chicken crossed the road showed inconclusive data and resulted in the loss of all test subjects due to traffic fatalities (Hoyman 2001, Larsen 1987). In urban river engineering studies, various gods were employed to install large rip-rap but no upper limit of rock size was found (Robinson 1989). Others have attempted to answer the question, can a five-ounce bird carry a one-pound coconut (Nigget 932)?

No existing data could be found to support the sound of falling debris in forests. Objects or situations may be essentially silent, but they could still be construed as having made a sound (Simon and Garfunkel 1965). We postulated that there is actually a compression of sound waves that could be detected in the absence of a human subject. As part of a broad attempt at getting paid for not doing any real work, this study used up a lot of grant money to test the hypothesis. While we were out there, we decided to study the language habits of all of the people who kept coming up to us and bothering us by asking “what are you (yooz) guys doin’”.

Large woody debris accumulation events or “falling trees” were recorded using some bitchin recording equipment that our undergraduate student had in his basement. Man, that dude can rock. He was playing a kick-ass guitar like Van Halen and Satriani and shit. Awesome! Video footage was collected with a Hitachi Z900 video camera and audio data was collected using a Shure SM58 microphone and three Shure DM 25 directional microphones with parabolic collector dishes. Recordings were made on a Tascam 850 8-track digital recorder and Yamaha 16-channel mixing board. Pot-smoking undergraduate assistants were employed for almost no money to monitor the equipment from a tricked out Chevy van outside the National forest boundary. Decibel tests were made just outside the van to make sure they couldn’t hear any wood falling.

Video footage and audio footage were reviewed back in the “lab” and fallen trees were verified by personal observation and measurement.

We collected over 20,000 hours of video/audio tape. Twenty incidences of large woody debris falling were recorded, with two entire trees falling. The remaining incidences were really large branches, which if you stood them upright, could pass for trees in most circles. In order to do proper statistical analysis, we made up some data and included that too.

Decibel levels were adjusted based on the distance of the incident from the microphone. Using the inverse square law and some other cool math equations, we transformed the data and have represented the decibel level, as it would sound to a person standing 20 feet from the impact point. We tried to remove the trend line from the graph but that goddamn Excel program wouldn’t let us do it. Anyway, each falling LWD event did show a positive decibel reading, and we found good correlation (R2=0.789) between LWD length and decibel level. 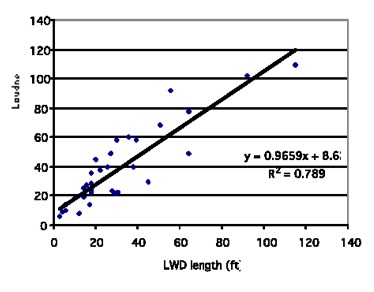 Data collection took place near the Chequamegon National Forest boundary. To analyze pronunciation of the word “Chequamegon”, (pronounced Shuh-wa-muh-gun), we recorded the answers of various participants and inferred their state of origin from license plate data. We treated the proper pronunciation as the original condition and the mispronounced word as the treatment condition. From verbal pronunciation, we recorded the approximate spelling of the mispronounced words using the Franklin phonetic method of English pronunciation. Jaccard’s Coefficient (Jaccard 1912), a qualitative community comparison index was used to examine differences in the syllables present.

No, that’s Jaccard, not Picard. Oh I know what you’re going to say, that the Next Generation is superior to the old in a technical sense, but they often rely on last second gadgetry to get out of situations, whereas Captain Kirk would just use intelligence or brute force. Sure, Picard is a better diplomat, but…

Analysis showed that the blood alcohol content (B.A.C.) of hunters and snowmobile riders was positively correlated with mispronunciation (R2=0.74, Figure 2). These data correlate inversely with local sheriff department data for mortality due to shooting, drowning or crashing into moose. Data from non-inebriated local residents showed nearly 100% proper pronunciation, so it was assumed that these individuals would know the proper pronunciation if sober. 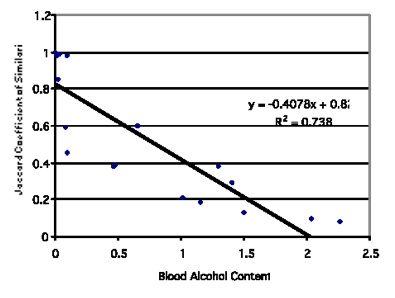 Figure 2. Pronunciation of the word “Chequamegon” under the influence of alcoholic beverages

Residents and non-residents were asked about their feelings regarding mispronunciation (Table 1). Minnesotans, who were mostly mountain-biking yuppies from Minneapolis, were generally horrified that they had mispronounced the word, and promised to remember to pronounce it properly the next time. Nearly all Illinois residents could care less and most told us to “fuck off” or “get bent” or asked if we were high. 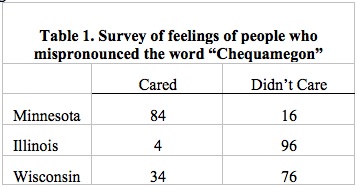 We really don’t think anyone reads the results sections of these articles because they are tiresome, so in an effort to spice things up a bit, we’ve included the box scores of last weekend’s NHL action (Table 2). 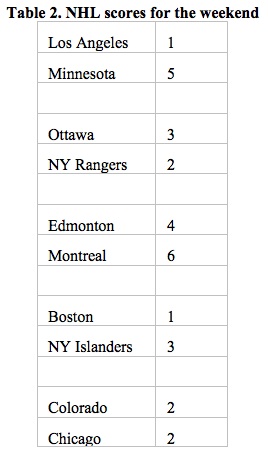 If you really do read the results section then you obviously have too much time on your hands and need a social life. Here’s a clue, just read the abstract and the discussion, then move out of your mother’s house you frickin loser.

In the discussion of falling trees and the sounds they make, it is important to define the term “sound”. We define sound as a compression or fluctuation of air molecule density and location that can be interpreted by a device that measures that compression or fluctuation. Sound levels were found to be inversely proportional to the distance from the microphone. It is indeed possible that although the sound is made, people may not hear it as decibel levels may be below the threshold of human hearing. Results show that in every instance, when large woody debris falls in the forest and there is no one there to hear it, it does indeed make a sound.

Our research did not answer those technical questions posed by Romm (1996) where he speculates; what if the tape player breaks?, what if its played backward?, what if the budget runs out and no one is there to listen? Romm also poses some philosophical debates such as, what if the tree is an Ent, and it trips looking for the Entwives? Or what if aliens hear it and they don’t have ‘ears’ in the same evolutionary sense as humans. This topic was not addressed in Havel (1998).

This information could be used to monitor the accumulation of large woody debris near streams and could serve as an ice-breaker at really nerdy parties. Yeah, that’s a good idea, why don’t you talk about science at a party. People will flock to you, really. Trust us.

Milne, A.A. 1924. Chapter 9 in Winnie the Pooh; in which Piglet is nearly surrounded by water. Methuen and Co., London.

Robison and Beschta. 1990. Identifying trees in riparian areas that can provide coarse woody debris to streams. For. Sci. 36: 790-801

Romm, D.E. 1996. If a tree falls in the forest and there’s no one there to write the back cover blurb… The Ethical Spectacle, March 1996.

– – –
Originally published in the British journal Null Hypothesis, and reprinted with permission.