(Also available as a pdf)

Abstract: We used computer flow models and high definition vertical and horizontal GPS to measure the stability of engineered Ent debris jams in deciduous forest streams. We tested the effect of in-situ buoyant, drag and Star Wars forces on the stability of Ent-derived jams. These results were compared to equivalent forces applied to debris jams made from simple large woody debris and large graduate students. GPS was used to measure the movement of engineered jams over time. Results show strongly that despite strong initial stability, Ent jams are subject to eventual failure in 100 percent of treatments within a short time period. Because of the unpredictable nature of Ent jams, we do not recommend using them for in-stream fish habitat or geomorphic manipulation.

Large woody debris plays and important role in stream habitat for fish, macroinvertebrates and raft material for small runaway boys (Twain 1884). Logjams create habitat complexity through local scour and also can catalyze the geomorphic channel processes of erosion and deposition important in normal fluvial geomorphic equilibrium (Bilby and Ward 1991, a bunch of others). For decades, resource managers and engineers have struggled with methods of installing engineered logjams in remote areas. Often, large logs can only be taken on site or hauled using helicopters or heavy equipment such as excavators or AT-AT walkers which are costly and can cause considerable damage by tearing up the soil and fragging people with lasers.

Past investigations have monitored the movement of wood by animals such as woodchucks (Fitzpatrick 1980). However, little data exists monitoring the use of self-mobilized wood as the base material for logjams. Tolkien (1954) describes the ability of Ents, or “tree shepards” to walk, lift objects and converse. We therefore speculated that Ents could simply walk to a construction site and lay down in the appropriate, pre-determined location.

Monitoring the forces acting on treatment and control jams was complicated hydraulic stuff, so you’ll just have to trust us there. Various researchers have investigated the buoyant and drag forces acting on large woody debris (Shields et al. 2001). However, research examining the effect of Star Wars forces on in-stream debris is limited. Skywalker and Kenobi (long time ago) showed variable results when trying to move objects of differing size and weight, while Yoda (long time ago) found size to be irrelevant. No research has been completed measuring “the Force” on wood. Robinson (2003) was the only researcher to examine the force of his wood, while Hoyman (1999) examined the force of wood on beaver.

Differential Global Positioning Systems (GPS) have become more accurate in recent years. The Bush administration has employed them in tracking all American citizens by ingestion of transmitters in light beer products and subsequent activation through daytime television and late-night infomercials (Cheney 2003). In order to better quantify the movement of engineered jams in real spatial and temporal thingys, we measured the movement of individual logs using high-definition GPS.

The study sites were all located on tributaries to the River Isen. Sites were selected based on a bunch of parameters. All Ent jams were constructed using ten individual channel-spanning Ents who were asked nicely if they would please come to the site and lay down in the stream. Site selection was completed in May of 1969 but Ents did not arrive at the site until June of 1999, following several Entmoots. Ents were then directed into position by professional engineers. Several Ents decided to leave because we were too “hasty” and the experiment sounded too much like “orc mischief”. Initial attempts to anchor Ent debris with steel cable proved fatal to experimenters and were abandoned. Our sympathies go out to those graduate student’s families. Safety tip: Ents don’t like drills.

In this study, two control groups were also included. To account for the confounding dual human and woody nature of Ents, jams were engineered using both large woody debris (LWD), consisting of logs and rootwads, and large graduate student debris (LGSD), consisting of large graduate students and post-doctoral fellows (that means people who got money, not fellows in the chum or buddy sense of the word).

Large woody debris jams were constructed of ten pieces, each 16 inches in diameter and 20 feet in length. Since no channel spanning graduate students were found, we gathered the tallest and fattest graduate student wankers possible by offering free tickets to a pre-screening of the new Star Trek movie, “Worf’s Revenge”. Ok, geek, settle down, there really is no such movie, we just made that up. I mean really, Worf is a big pussy anyway. What kind of Klingon security officer passes out every time someone taps him on the chin? That chick was tougher than he was….

Prior to binding their hands and feet, graduate students were drugged by offering them high quality hydroponic sensamillion from the University of Minnesota Horticulture Department. Zigzags were unavailable, so joints were rolled in Rite-in-the-Rain paper. Tip: It may be write in the rain, but it sure as hell ain’t Burn in the Rain paper. We learned that lesson the hard way when measuring some “drag” forces of our own.

All jams were arranged to maximize stability according to Brunfelt (2000) and Plant (1983). Log stability was quantified by differential GPS readings using kittywampusness as an indirect measure of interdependent logjam stability. The Kittywampus factor (Kw) has been shown to be directly proportional to the stability of complex structures (Smith et al 1998). Calculation of buoyant and drag forces on jams was done using discharge values for 12 storm events obtained through detailed HEC-RAS modeling of study site locations and calibrated using real time gauge data and back calculation of roughness.

Star Wars forces were applied by certified Jedi knights. We attempted to avoid “good side” of the Force bias by using evil Sith Lords in blind comparisons. These experiments failed as both sides could “feel” each other’s presence and refused to continue without a light saber duel. Jedis can be a bunch of frickin’ primadonnas sometimes. Star Wars Force was applied at low flow to avoid confounding results from buoyant and/or drag forces. 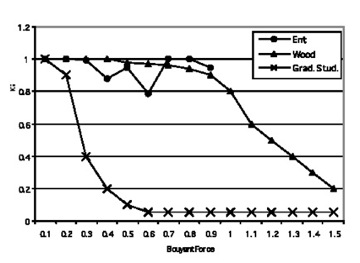 Large woody debris jams showed the longest stability under buoyant and drag forces, but fell apart quickly under Star Wars Force (Figure 1 and 2). Graduate students either drowned or got cold and wined so much that we either untied them and let them go or they passed out and floated away. Again, our sympathies go out to those graduate student’s families. 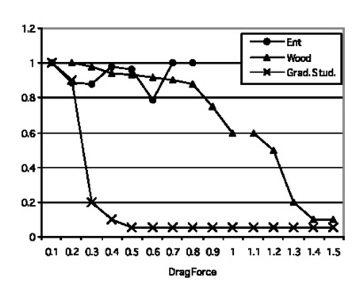 We really don’t think anyone reads the results sections of these articles because they are tiresome, so in an effort to spice things up a bit, we’ve included our picks for this years Academy Awards (Table 2). 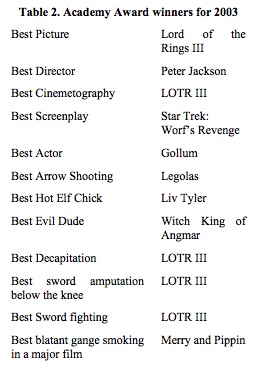 If you really do read the results section then hey, congratulations, you’re now a successful academician. We both know you’re doing it to see the co-eds run around campus in the spring. And hey don’t be upset, I’m sure Science Fiction Digest will print more t-shirts in Small and XXL, just be patient.

Research has shown that trees contribute large woody debris to streams. Whether or not trees do so intentionally has not been examined. Others have speculated on the ability of trees to solve socio-political disputes (Peart 1977). Our research definitively shows that Ents and graduate students are poor choices for adding roughness elements to stream channels. We recommend using either real logs or Easton’s new graphite composite Cyclone Log, the official log of the NHL. Past research has shown that substitutes for actual wood are typically unstable. Cheese log and peanut log (Salted nut roll) jams were shown by Stegowski et al. (1972) to disintegrate quickly. Koonce (1990) found that Lincoln logs, although made of real wood, are expensive, and significant blockage of flow required logjams composed of over 1.2 million pieces. This topic was not addressed in Havel (2001).

Secondly, we urge river restoration managers to consider the impact of Star Wars Force, commonly known as “The Force” when planning engineered logjam or woody debris projects. The Force is typically strong in skinny, bespectacled graduate students and can be used for ill gain if the Dark Side is employed. In most cases, graduate student change to the Dark Side is preceded by several offers from evil emperors to either join them or die.

For those of you who peer reviewed this article for Nature and turned it down, put that in your pipe and smoke it. Yeah, you know who you are.

Yoda. Long time ago. Slimy, my home this is, now watch me lift it. 34th Proceedings of the Jedi Masters, Dagobah, Galaxy far, far away.

Disclaimer: Ents are the brainchild of J.R.R. Tolkien and Star Wars references are the property of Lucasfilm or some gigantic corporation. Please don’t sue me, I’m a biologist and thus have no money.

Originally published in the British journal Null Hypothesis, and reprinted with permission.