Cells show an astounding awareness of the environments in which they find themselves, actually adapting their behavior to changing surroundings. The key to this ability is a constant sampling of the multitude of molecules found in their environments, many of which are signals that convey information to the cell [1].

To do communicate with their environment, they employ a large array of molecules that allow signals to be sent, received, deciphered and responded to. These molecules are generally referred to as “signaling molecules [2].”

Many intracellular signaling proteins behave as molecular switches. The reception of a signal activates them and causes them to pass the signal through the cell, after which they can be switched off until another signal is received. Molecular switches fall into two main classes: the first is a very large class of proteins that are activated by phosphorylation (i.e. the addition of a phosphate to the protein). The second class is made up of those proteins activated by the binding of a guanine nucleotide. This second group is generally referred to as GTP-binding proteins or simply G proteins [3].

There is tremendous variety among how G proteins are used to send Nevertheless, they do have certain common features, whether found in yeast or human beings. The main feature of G proteins is that they are regulated to either turn on or off based on their binding to a single guanine nucleotide [3].

A nucleotide is a molecule made up of a nitrogen-containing ring compound linked to a five-carbon sugar (see Figure 1). The nitrogen-containing rings (generally referred to as bases) can be of five different types, of which guanine is one (the others are cytosine, thymine, uracil, and adenine). Nucleotides are named for which base they contain. For instance, a guanosine nucleotide contains the base guanine. The sugar component of a nucleotide can also carry one or more phosphate groups, which allow them to act as short-term carriers of chemical energy. The nucleotide will bear a different designations depending on the number of phosphates carried by the sugar(e.g. guanosine monophosphate [GMP] refers to a guanosine with one phosphate molecule attached to the sugar, guanosine diphosphate [GDP] has two phosphates, and guanosine triphosphate [GTP] has three). 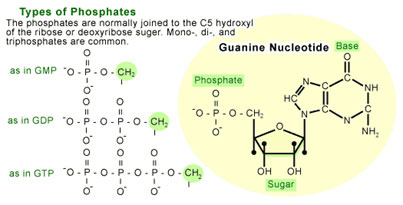 When a G protein is bound to a single GDP molecule it is in an off state, or inactive. The G protein switch occurs when a GTP molecule replaces the GDP, rendering the protein fully active. This activity allows the G protein to transmit a signal by binding to proteins that ultimately cause a functional response in the cell [1-4].

What causes the GDP to be exchanged for GTP on a G protein? Firstly, it is important to realize that a G protein is normally bound to GDP and inactive. The inactive G protein is waiting for the reception of a signal on the surface of the cell, which upon binding will cause the G protein to exchange GDP for GTP and become active. Therefore, it is the reception of this signal that will cause the exchange [1,4] (see Figure 2). Once this occurs the G protein will begin interacting with other signaling components to transmit a signal. 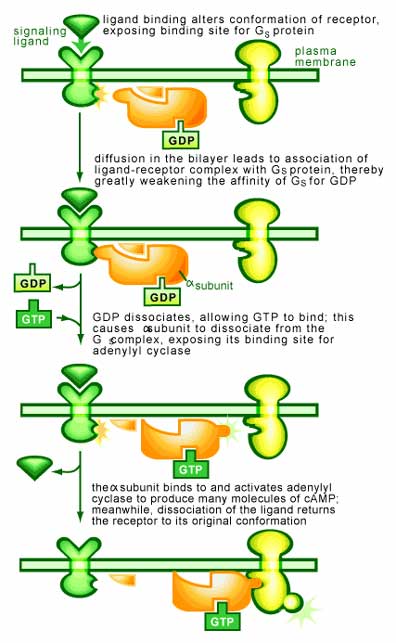 A G protein is also capable of turning itself off and stopping the whole process [1]. The return to an inactive GDP-bound form is a consequence of a second common feature of all G proteins: their ability to convert GTP to GDP (termed a GTPase activity). It is this GTPase activity that is responsible for G proteins generally being in the GDP-bound inactive state.

Even though a large number of G proteins have been discovered over the years, they all fall into two distinct classes [1]:

These proteins are composed of three subunits (α, β and γ subunits) and are found associated with receptors in cells. These receptors (called G-protein-linked receptors) are the largest group of surface receptors known in mammals. They respond with a wide range of extracellular signals (including hormones and neurotransmitters) and span the membrane of the cell. On the inside of the membrane, the receptor interacts with a G protein, which is required for the receptor to function [2].

The time for which the α and βγ subunits remain apart is determined by the α subunit. Over time, it will degrade the GTP to GDP due to it GTPase activity. Once this occurs, the subunits will once again bind to each other and terminate the signal. In a cell, this all occurs within a few seconds.

This system is an excellent example of how a cell receives and processes a signal from its environment. But, it also reveals the potential for dangerous mishaps should this system become unregulated [2]. The disease cholera is an illustrative example. Cholera is caused by a bacterium that multiples in the intestine, where it produces a protein called cholera toxin. This protein enters the cells lining the intestine and modifies the α subunit of a G protein so that it is no longer able to convert GTP back to GDP. And thus once activated, this G protein cannot be turn off and continues to transmit its message to the cellular machinery. In this case, it causes the intestinal cells to continually expel sodium and water into the gut, resulting in diarrhea and dehydration. This can result in death if steps are not taken to replace water and salts.

These G proteins (often called GTPases to distinguish them from heterotrimeric G proteins) are comprised of a single unit. They resemble the α subunit of heterotrimeric G proteins and function as a molecular switch in a similar way. Normally they are bound to GDP and inactive. Upon the reception of a signal, they exchange GDP for GTP and become active [1-2]. They differ in their mode of activation by not being directly associated with the receptor. Instead, GTPases are several steps away from the receptor (often termed an enzyme-linked receptor) that ultimately cause their activation. In between are a variety of adaptor proteins that are activated by the enzyme-linked receptors. Once in the active state, the GTPase will initiate a cascade in which a series of proteins will phosphorylate each other to transmit the signal.

One of the most famous small monomeric G proteins is Ras, which was first discovered as a cellular copy of a viral gene that causes cancer in mammals. It was later discovered that about 30% of all human cancers have mutations in cellular Ras genes, usually alterations that prevent the molecule from switching off. These studies uncovered the idea that cellular genes could act to promote cancer and thus the genes able to do this become known as oncogenes. The fact that several G proteins have now been shown to be oncogenes reveals the importance of the switch mechanism.

G proteins have evolved to transduce signals (see Figure 3). Their importance is revealed by the fact that they can be used transiently to convey information—they can be turned on and then quickly be turned off again. This function has resulted in their involvement in the regulation of many aspects of cell growth, differentiation, gene expression, and cell movement. As a group, they form a universal mechanism that allows a cell to adapt to its surroundings.