When imagining a cell, it’s often easy to think of it as a lone entity, a single squishy bubble of fluid. However, cells are actually incredibly complex, and they can organize in ways to form many types of structures and ultimately whole living organisms like a tree, a bird, or even our own bodies! Understanding how these cells interact and get together is key to understanding how different cells make different structures – like how bones are different from skin for instance. Knowing this also reveals how cells talk to one another. And just as we like to hug some people but prefer to only text others, the cells in our bodies have different ways of interacting. 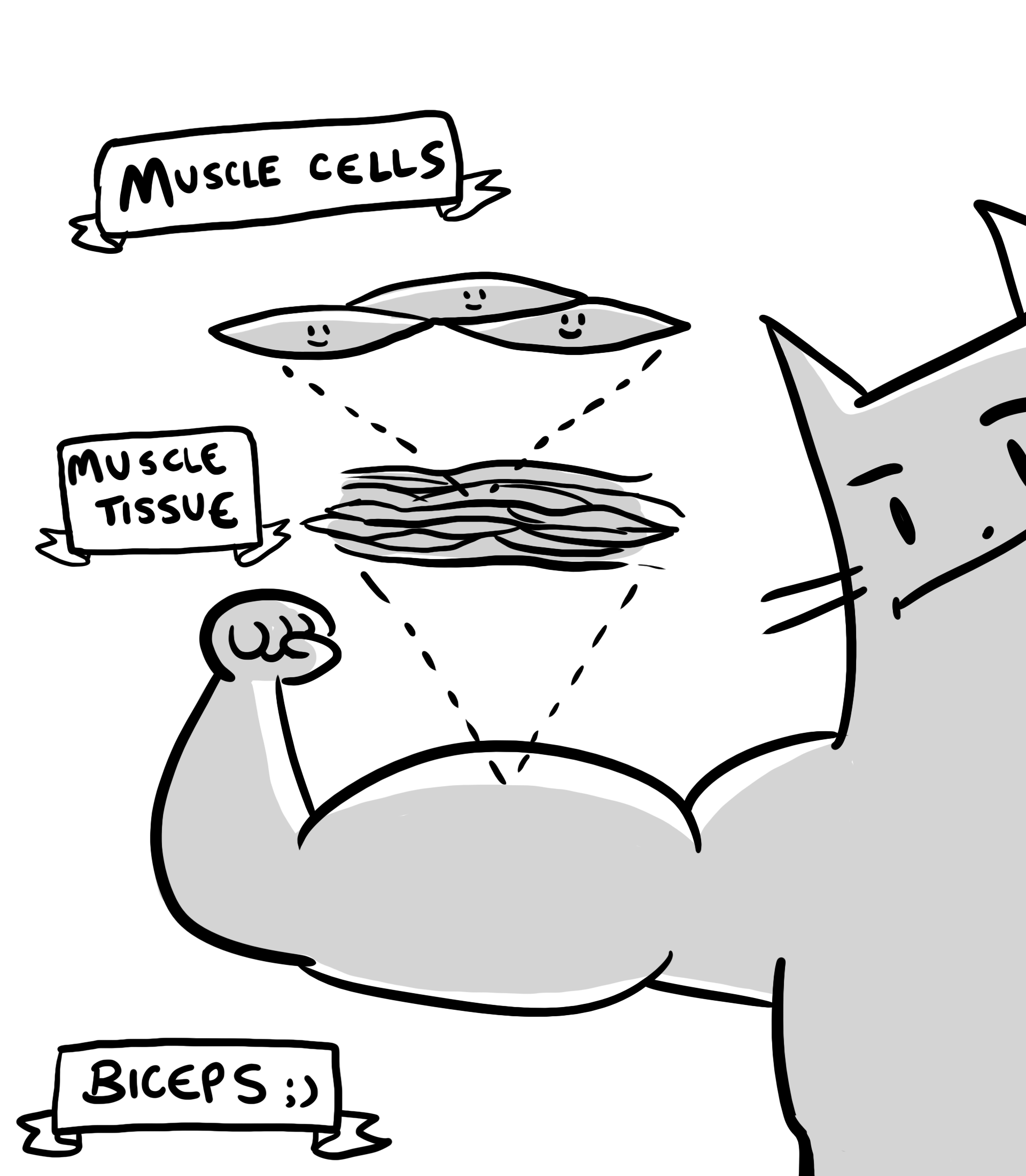 When forming complicated structures, cells are enclosed in a sort of three-dimensional fishing net, made of proteins, sugars and other molecules all released by the cells themselves. Think of it as a matrix of stuff that envelops the cells, which is fitting since this net-like material is known as the extracellular matrix. Incredibly, cells not only make this matrix, but they also organize it and destroy it in a highly regulated fashion. Furthermore, the extracellular matrix can also organize the cells themselves. It’s as if they are talking to each other, informing them of their surroundings.

How do the cells come together?

When cells do form tissues, they are essentially clumping together in a very organized manner. They can generally do this in one of two ways:

(1) a cell can directly hold onto a neighboring cell by way of a structures known as cell junctions, forming something known, not surprisingly, as a cell-cell junction; or

(2) a cell can interact with another cell indirectly, in a way where they are not really touching each other, but communicating to each other via this aforementioned extracellular matrix – we call this a cell–matrix junction.

This is partly why different tissues can physically be so different from each other. If you can imagine these differing ways of interaction, as well as consider the amount of cells compared to the volume of extracellular matrix, you can see how this is one way to introduce diversity into structures. For example, bones or tendons are made of connective tissue where the extracellular matrix is plentiful and cells are sparsely distributed within. Contrast that to tissues that make parts of your gut or your skin tissue, where cells generally adhere together into sheets.

In other words, the architecture, shape and strength of tissues depends a lot on the way cells come together, but beyond that, how cells function (i.e. what they can do) as well as how they keep healthy, will depend not on just how they “meet” but also in how they communicate with each other. Here, cells exchange signals that coordinate their actions. This tends to be through specific molecules belonging to one cell being sent and/or making contact with another cell. If cells can’t touch and communicate this can cause problems. They can’t talk properly, which in turn disrupt functions, and ultimately leads to disease. Just imagine the problems arising in a family where members decide to give each other the silent treatment, or worse start lying or yelling at each other. 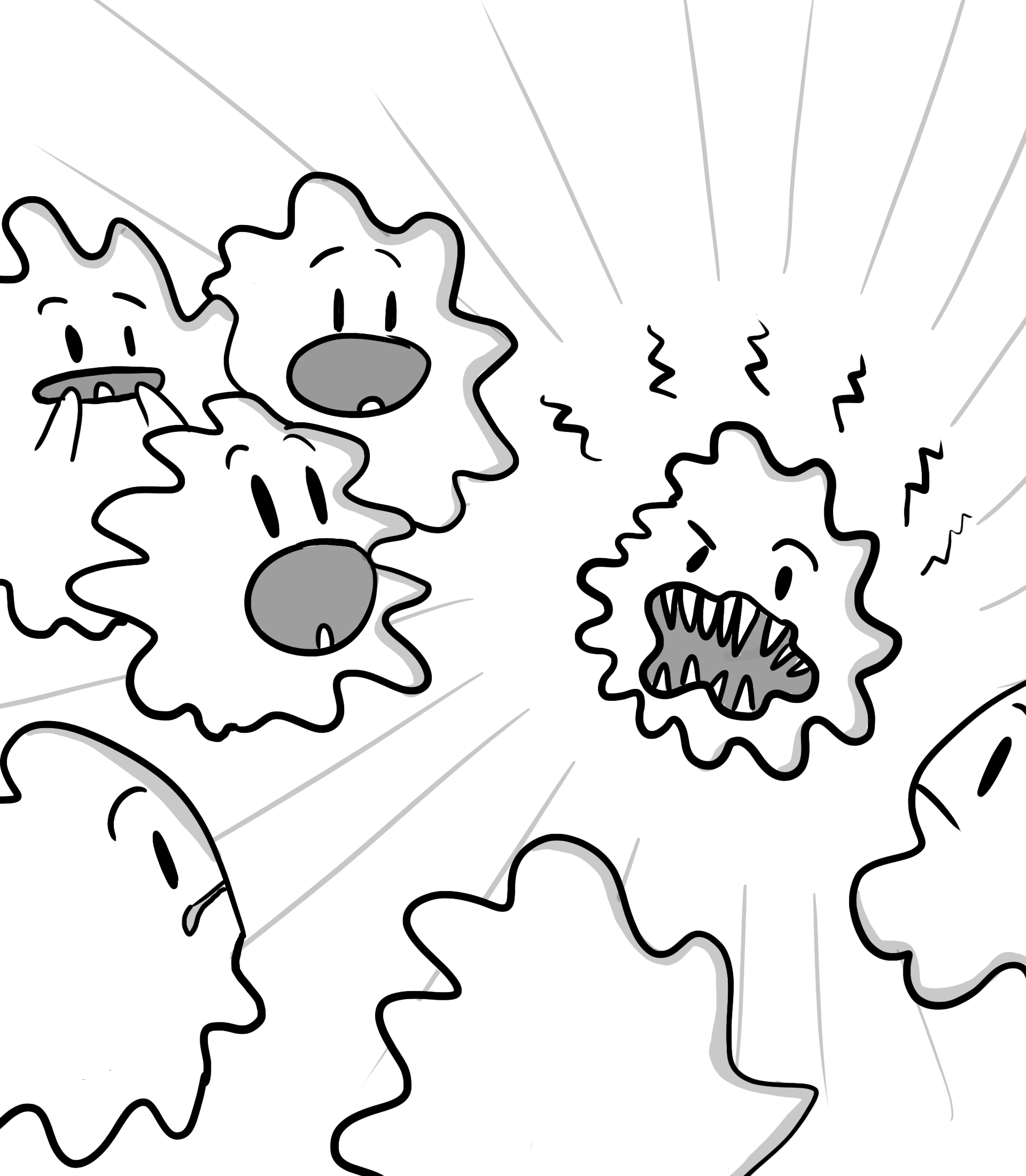 Multiple examples show how diseases appear when there are problems in the way cells adhere or communicate. Bacteria, viruses or parasites often find ways to confuse these systems, since they must first adhere to host cells in order to infect and cause diseases. Another example is how cancer can spread throughout a body. Tumor cells tend to play it fast and loose with their adherence abilities allowing them to escape their site of origin and travel throughout the rest of the body.

Consequently, to fight many diseases, scientists need to understand the errors that occur when cells come together. This is a bit like acknowledging that to fix a car, it helps to know how the pieces of a car fit together.
Cell Adhesion Molecules, and introducing the Integrins.

We know many details about how cell-cell junctions and cell-matrix junctions work. We know that cells use special proteins to interact and attach to neighbouring cells and/or the matrix. These proteins reside on the cell surface and are collectively known as cell-adhesion molecules (CAMs). Although there are many different types of CAMs, those know as integrins play an especially crucial role, because integrins are in charge of cell-matrix interactions.

Integrins span the cell membrane so that a part of the protein is outside the cell and another part is in the interior. The part outside the cell is the one that attaches to elements in the extracellular matrix, while the part inside the cell binds to the cell’s internal skeleton (this is called the cytoskeleton by the way). 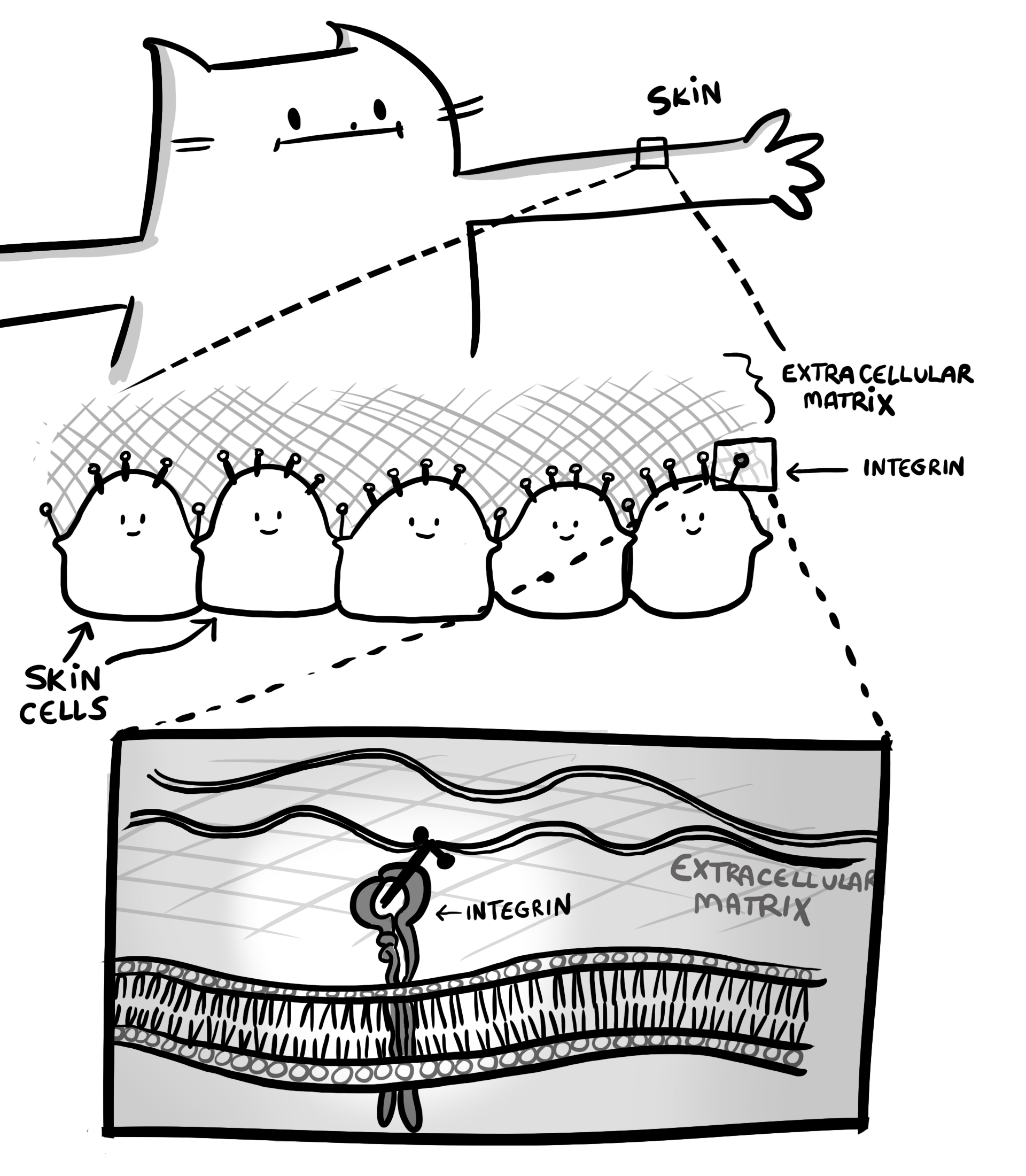 If you think about it, this means that integrins link the exterior of the cell to the interior of a cell. In other words, these membrane spanning proteins are able send information out of the cell but also into the cell. In this way, the integrins can let a cell know what the outside situation is like (is there extracellular matrix out there, is it good, should we stick, should we let go)? Not only that, but the integrins help cells actually make decisions to react in certain ways (i.e. yes, I’m going to be extra sticky, or no, I’m want to be less sticky so I can let go).

In a nutshell, cells use their integrins to attach and detach to the extracellular matrix when needed, forming and breaking bonds. Scientists have actually found that integrins can change themselves between active and an inactive forms. This behaviour controls the way cells migrate inside our bodies when needed.

We humans have at least 24 types of integrins with different jobs in your cells. One way scientists understand the function of a cell’s component is to observe what happens if they remove it or get it to stop working. For example, they’ve observed that mice, who have had the gene for one type of integrin deleted, will develop weak muscles. This provides evidence that that specific integrin has an important role in producing healthy muscles. 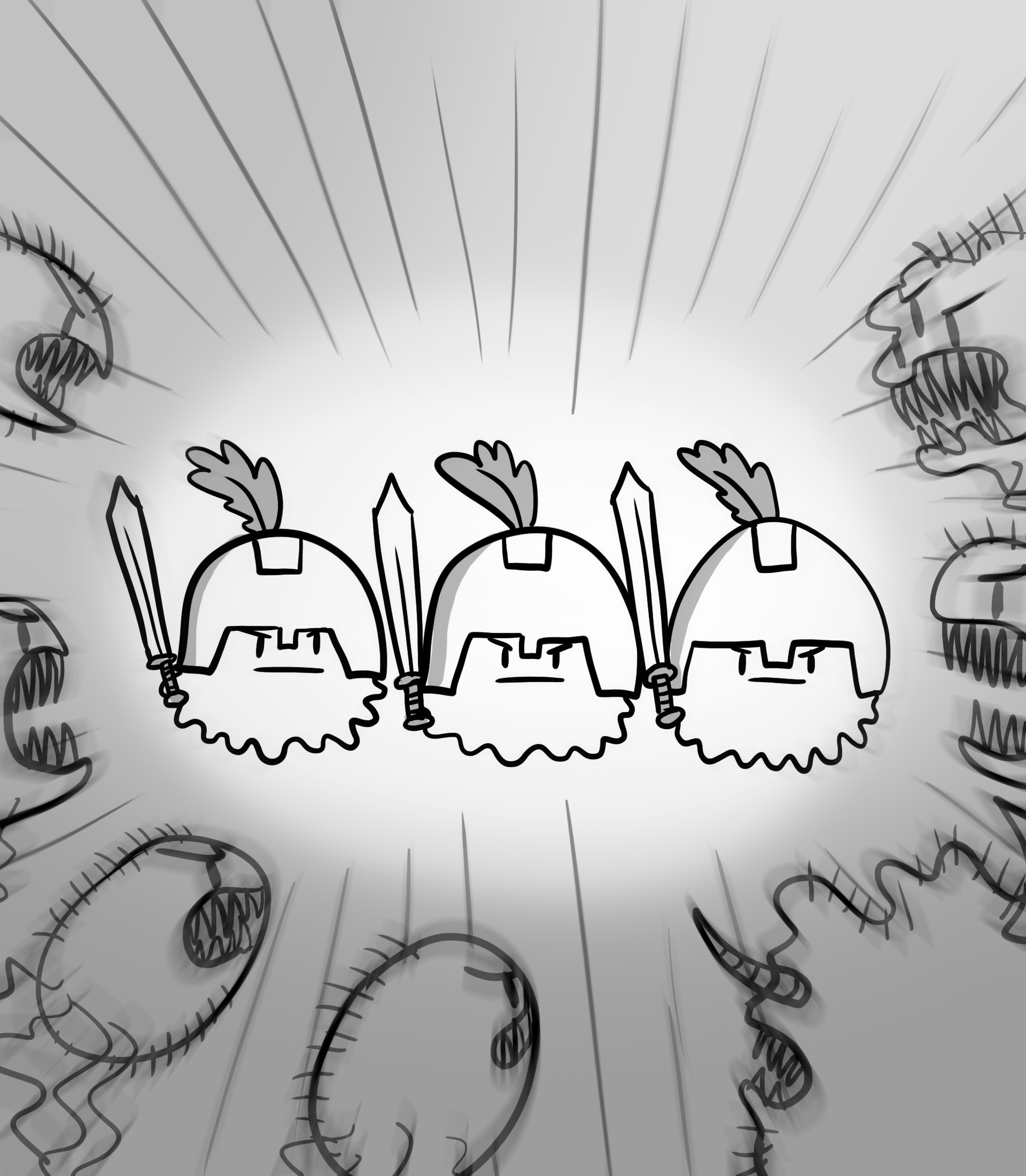 Integrins are especially crucial in how your immune system works. Some of them are uniquely found in white blood cells and help them fight infection in the body. For instance, when white blood cells in charge of protecting the body against infections have reached the site of an attack, it makes sense that they become more sticky so that they can stay put in that area of infection. Furthermore, integrins not only help the white cells attach but they also mediate the processes require for the white blood cell to squeeze out of the blood vessel and directly into the damaged tissue area. People with problems in these type of integrins suffer from frequent bacterial infections. Other types of integrins are in the blood platelets cells that help the body form clots to stop bleeding, and people with problems in those integrins bleed excessively from wounds.

On the Shoulder of Giants

Dr. Timothy A. Springer, a professor from Harvard Medical School and Boston Children’s Hospital, dedicated his career to understanding the cell-cell interactions that happen in immune responses. He discovered the first family of integrins and figured out how integrins were able to send information out of and into the cell. His discoveries allowed the scientific community to understand how a faulty integrin can cause disease. Just as important, he led some of the first research that demonstrated how this knowledge can be used to help fight disease. Thanks to this remarkable contribution, Dr. Springer is the recipient of the 2019 Canada Gairdner Award, which recognizes world-renowned scientists for the impact of their research to human health.

Hopefully, you now know a bit more about how cells form communities, touch, talk, send messages and how we get sick if they fail at these tasks. Central in this scientific story are the class of cell adhesion molecules known as integrins. Just another example of the amazing abilities of your cells – definitely not just squishy bubbles of fluid.

If you’ve had an infection before, what are some of the symptoms that you are familiar with? Do any of these seem to relate directly to how integrins might be involved?

The paper made mention of cancer. Look up the word metastasis, and discuss in the context of how a defective integrin protein might contribute.