If the letters in the human genome, your DNA code, were a book, it would take a person typing 60 words per minute, 8 hours a day, around 50 years to copy the 3 billion base pairs. This incredible task of replicating all the genetic material in a cell must be accurate, must be copied only once, and must be complete at a specific point in time. The smallest mistakes can be disastrous. Sounds impossible? Not so fast – cells in your body are dividing as you read, and here’s the incredible part: copies of your DNA are made in hours – not months or years. 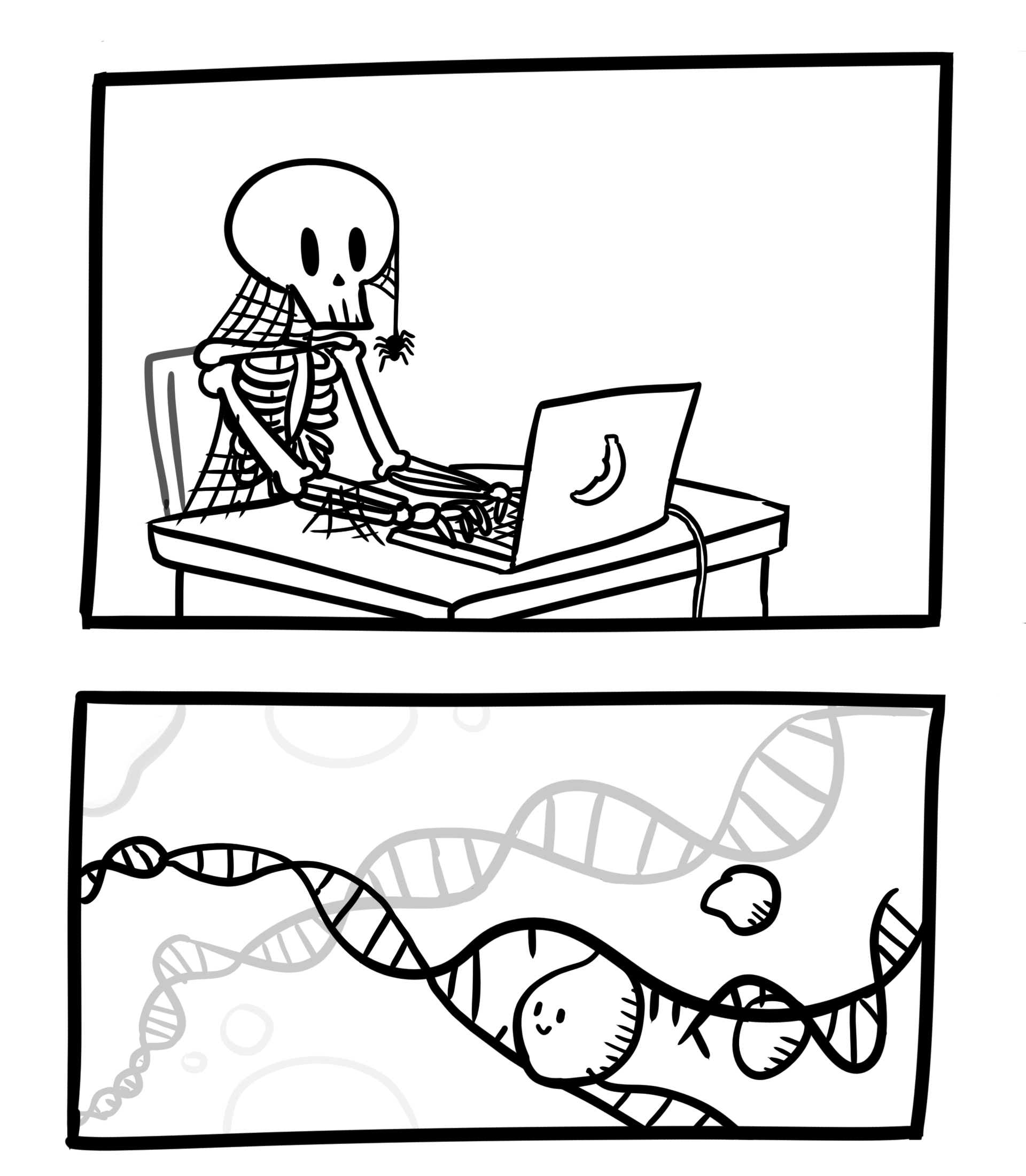 DNA replication, the copying of all genetic material in a cell, is an essential process for life. As cells divide to support growth, heal wounds, or replace damaged cells, the genetic instruction manual – the genome – must be reproduced efficiently and correctly. With 1.8 metres of DNA coiled tightly into the nucleus of every cell, this is not as straightforward as pressing ‘copy’ on your office photocopier. The efficiency of DNA replication in humans and other multi-cellular organisms relies on replication starting at multiple different sites, called origins of replication, throughout the genome. This is an elegantly choreographed process, not unlike watching a photocopier collate multiple documents simultaneously. It relies on numerous proteins and DNA molecules interacting at exactly the right time in exactly the right location to make an exact copy of the genome.

“Unless [replication] started at many different places, it would take months to duplicate the entire genome. But it only takes about 8 hours,” says Stillman, President of the Cold Spring Harbor Laboratory. Stillman and Diffley recently received the Gairdner Award for their work on DNA replication. When cells are preparing to divide, multiple proteins assemble at thousands of unique starting points. This set of proteins is known as the origin recognition complex, first discovered in yeast by Stillman, the discovery of which set the stage for further investigation of many additional proteins and molecules involved in initiation and control of DNA replication. 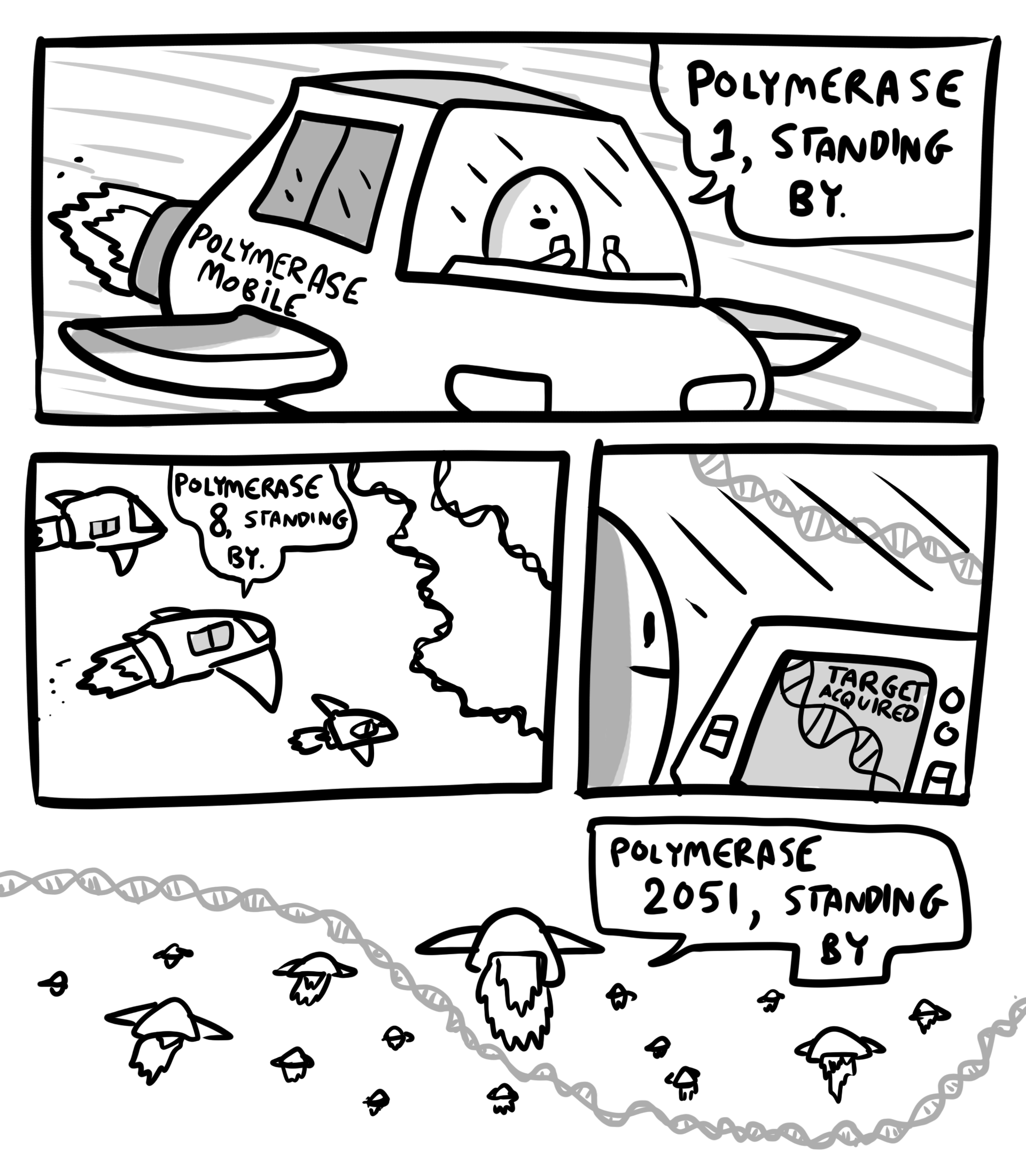 Controlling the process of DNA replication – ensuring that no part of the genome is replicated more than once – is critical. If thousands of people started photocopying an encyclopedia, each starting at a different point, surely they would make a mistake: they would copy some sections more than once, and other sections might not be copied at all. Unlike an extra page or a missing line in a book or newspaper, confusion at the cellular level can be catastrophic. Simple errors, such as small regions of the DNA copied more than once, or sections that aren’t copied at all, can have terrible results.

Astonishingly, the cell gets it right most of the time. Diffley was challenged to understand how these multiple starting points could be used once in every cycle of DNA replication – but never more than once. This level of precision and accuracy is accomplished by tightly linking the timing of DNA replication to the steps of cell division, known as the cell cycle.

When a cell is preparing to divide, the proteins that make up the origin recognition complex are recruited to the thousands of starting points in the genome. This is only possible when a cell is ready to divide, through the actions of proteins called kinases. Kinases prevent the assembly of the complex before cell division. Once the complex is assembled, it is joined by additional proteins, including a helicase, which is required to unwind the tightly coiled DNA. All of these proteins together indicate to the cell that the site is ready to be used for DNA replication. A full roster of proteins triggers the unwinding of the DNA, recruits the enzyme responsible for generating a copy of the DNA (DNA polymerase), and replication begins. 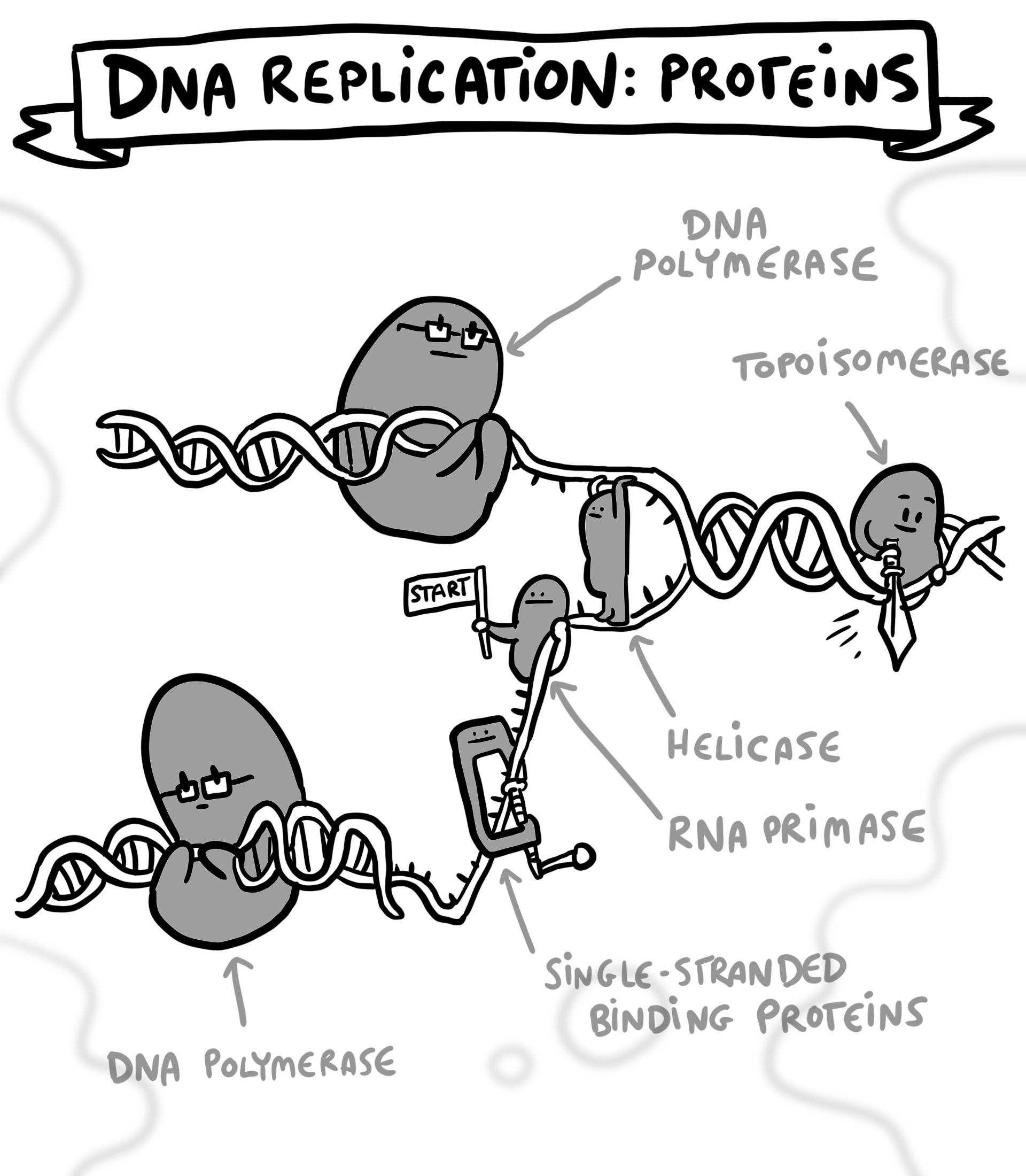 Proper DNA replication is one of the most critical aspects of cell division and understanding the process can help physicians and scientists understand various aspects of human health. Dysregulation of replication can be disastrous. Simple errors during the process of replication, resulting in incorrect amounts of gene products, may cause uncontrolled cell division resulting in cancer. There are some features of cancer that contribute to these kinds of errors, such as mistakes in how cells divide, but cancer progression itself can cause increased errors in DNA replication. A higher-than-normal rate of mutations in cancer cells can result in an accumulation of mutations and complex gene rearrangements. These mutations often make cells aggressive, resulting in tumor formation. Genomic instability also causes large variation between cancer cells, which makes it harder to identify and kill every cancer cell in a tumor.

Paradoxically, while cancer cells can become more aggressive through mutations, or errors in DNA replication, this process is also a compelling target for anti-cancer therapies. Many current chemotherapies interfere with the process of DNA replication. By targeting a process which is essential to all replicating cells in the body, these anti-cancer agents often have toxic side effects. As Diffley shares, “the future is to identify more precise treatments that aren’t as toxic.” 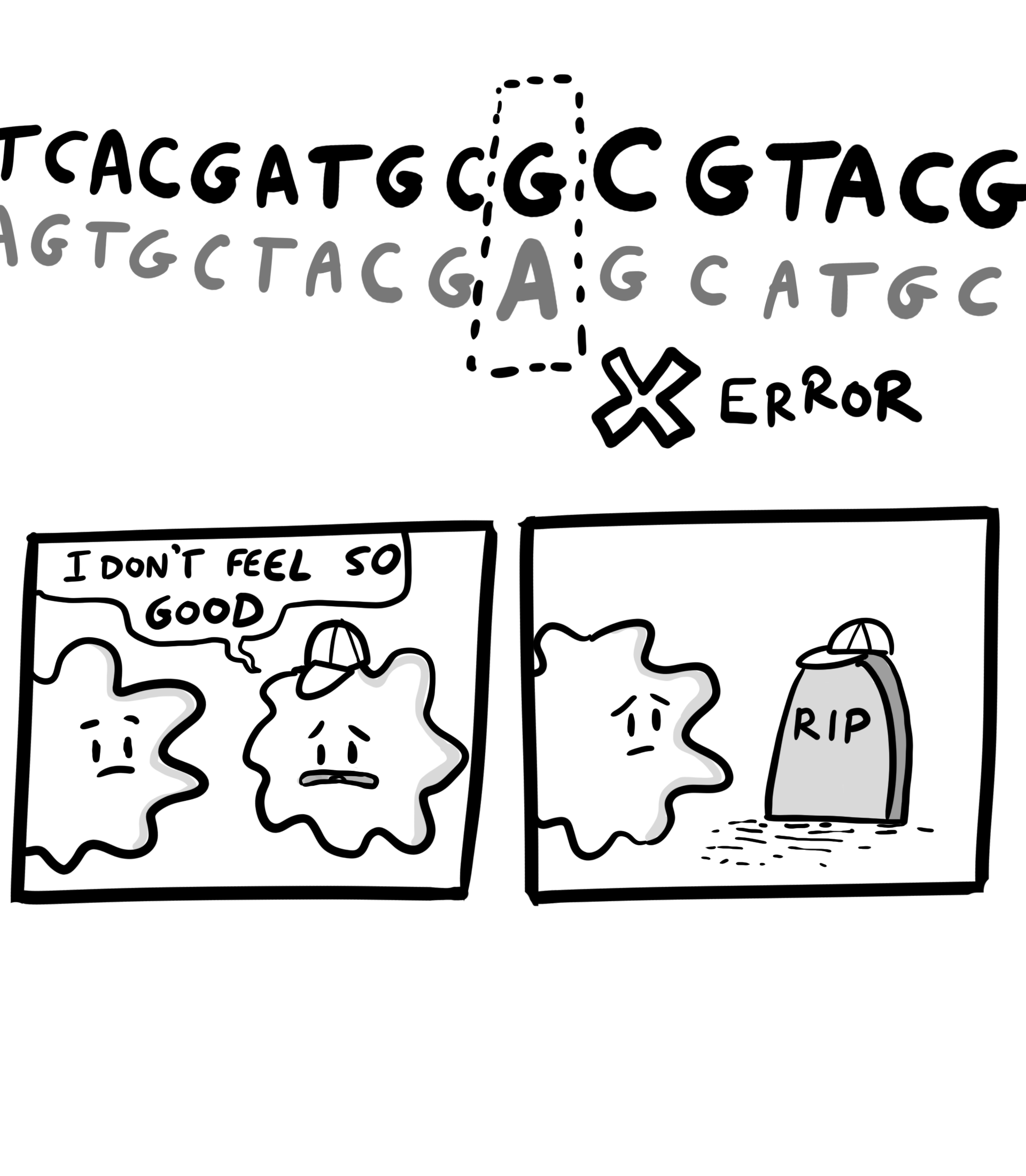 Some mistakes in DNA replication are heritable, caused by mutations found in many cells of the body. One such defect is known as Meier-Gorlin syndrome, a condition which is characterized by small stature. This is considered a form of primordial dwarfism as growth problems begin before birth. Mutations in components of the origin recognition complex are associated with this syndrome, and scientists suspect that the mutations impair the formation of the origin recognition complex. This results in delayed cell division, which impairs tissue and bone growth during development.

Scientists like Stillman and Diffley are still working to characterize DNA replication from start to finish, and we are only beginning to understand the complexities of the process. Although Stillman’s colleagues thought we knew everything there was to know about DNA replication 40 years ago, there are still many aspects left to uncover and understand. Just think – if Stillman and Diffley had started typing out the genome in the early 1980s, they’d still be at it now.

Cancer often requires the accumulation of multiple mutations in the DNA (i.e. lots of things need to go wrong for a cancer effect to be seen). As outlined in the paper, often one of the first mutations involves one that makes DNA replication itself more error prone. Why might this lead to a cascading effect, and ultimately lead to the cancer itself?