When we are learning about cells and how they function, we are often confronted with large, circular blob-like things that contain several different internal structures for us to memorize. It may be tempting to dismissively think of cells as being nothing more than these simple, two dimensional objects (after all, they are commonly referred to as “the most basic units of life”). However, closer inspection reveals that cells are extremely dynamic, and their daily activities are far more exciting and complicated than first appearances may suggest. Cells operate like tiny machines and their inner workings are highly coordinated and exquisitely complex. Each component of a cell must be carefully maintained and precisely localized in relation to the other components for cells to function appropriately. When all of these seemingly isolated components and processes are synchronized correctly, they cooperate to create life.

To begin understanding the complexity of a cell, a helpful comparison can be made between cells and busy cities. The different districts of a city, each with its own important task such as food or energy production, can be thought of as the various functionally distinct organelles within a cell. A power plant, for example, converts raw materials into usable energy for the city much like how the mitochondria of a cell generates chemical energy from environmental nutrients. However, a power plant in the industrial district can only produce energy when skilled engineers and workers are present, true also for the cell which needs specialized organelle-specific proteins to be at the right place at the right time in order to perform their work.

To effectively travel about this hypothetical city the citizens and workers require motor vehicles for transportation, this too parallels strategies employed by cells. While a car would travel along a highway to reach its destination, specialized proteins involved in cellular transport travel along rigid biological tracks such as microtubules. Microtubules are part of a family of scaffold proteins which collectively form the cytoskeleton, a filamentous support network which helps maintain the shape of the cell and prevents it from collapsing. 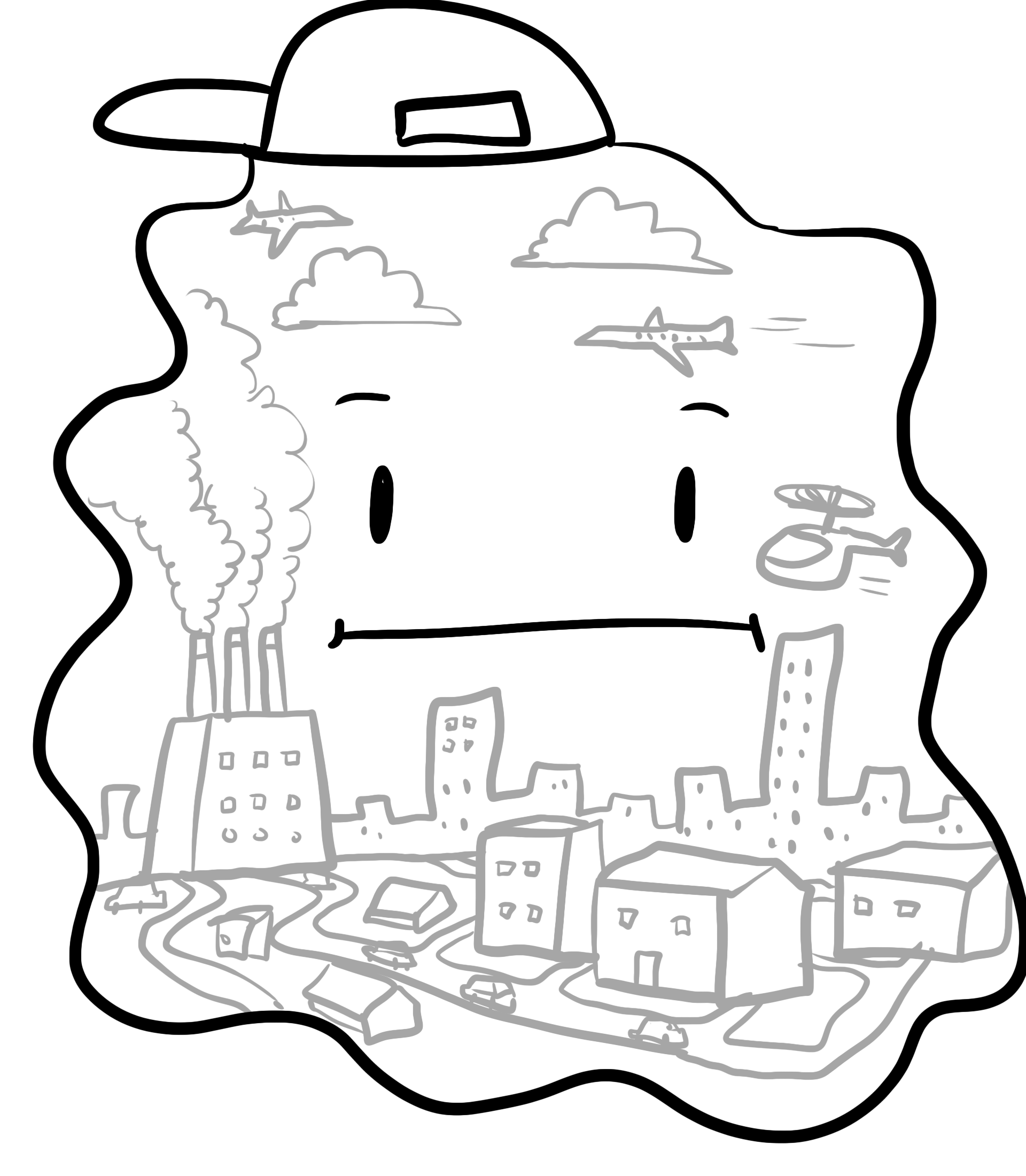 The proteins that travel the cytoskeleton are known as motor proteins and they are the nanoscopic machines required to turn the cells chemical energy into active motion. They provide a means to traffic molecular cargo, such as other proteins or entire organelles, from one intracellular destination to another allowing the cell to grow and adapt. One important class of molecular motors are the kinesins and their discovery marked one of the most significant milestones in furthering our understanding of the inner workings of the cell. 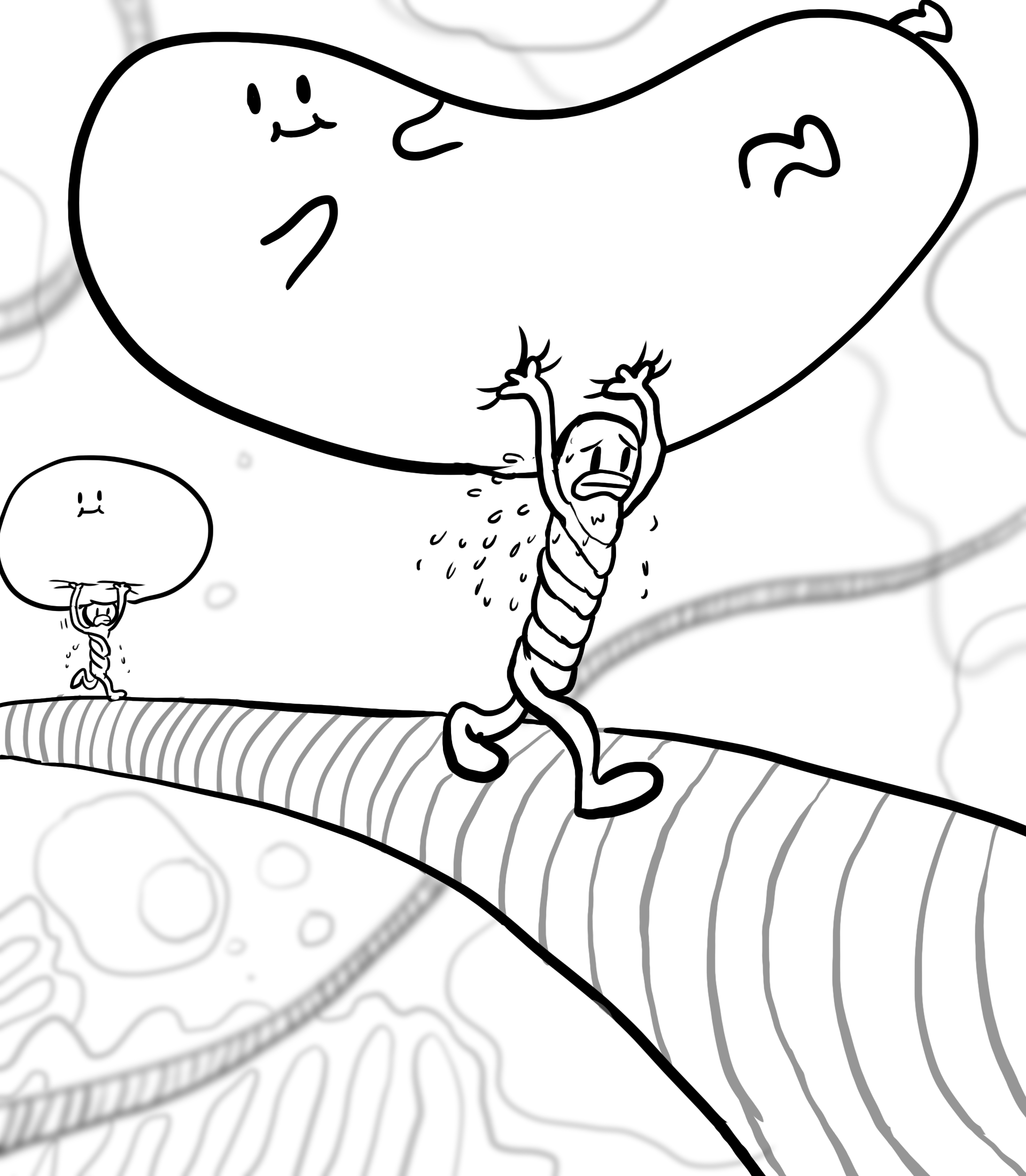 Working with the renowned molecular biologist Dr. Michael Sheetz, a young scientist named Ronald Vale made a discovery that not only changed the way scientists think about cells, it also laid the foundation for an entirely new field of science; mechanobiology or the study of how physical forces are involved in biological processes. This exciting research began with a 1985 publication in the prestigious scientific journal Cell, where the authors demonstrated the presence of a protein that associates with cytoskeletal microtubules and facilitates the movement of organelles along their length. Ronald and his colleagues decided to investigate the basis of microscopic motorized transport using neurons, the signal-transmitting cells of our nervous system. Neurons are a type of cell that rely particularly heavily on intracellular transport to send their messages in a timely manner due to the fact that they are far longer than most cells. The logic behind their decision to study in neurons was clever; the longer the highway, the more necessary motorized vehicles must be to travel along it.

Vale and his team began their investigations by harvesting an axon, the very long, slender portion of a neuron, from a giant squid and performing biochemical tests on it to identify proteins involved in motor transport. The choice to use the axon of a giant squid was instrumental to their discovery as it was easier to harvest and manipulate than that of other organisms due in part to its extraordinary size. Their efforts eventually paid off, as Ronald Vale and his colleagues soon identified a new protein which they showed plays an important role in cellular motor transport. Once the movement-promoting properties of their new protein were reported, they proposed the name kinesin from the Greek term kinein, meaning “to move”. 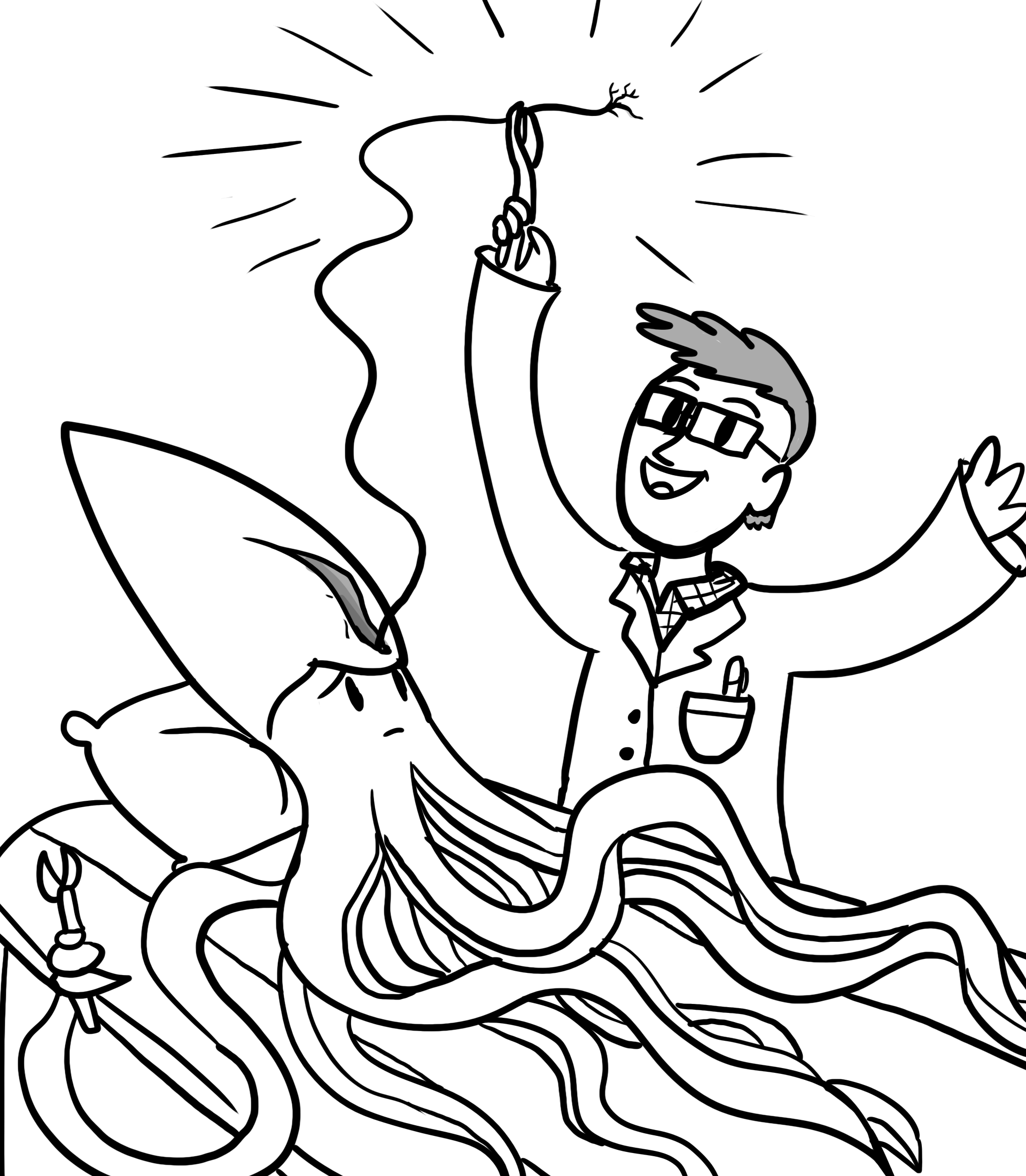 Following Ronald’s initial report in 1985, his research group and others worked diligently to establish a variety of important roles for kinesin in biological processes ranging from nervous system signaling to cell division. More recent insights from work in model systems like budding yeasts, nematode worms and fruit flies have shed light onto the molecular mechanisms of kinesin structure and function allowing unprecedented investigation of this motor protein.

Structurally, kinesins are comprised of two regions; a stalk region which ends in a long, flexible cargo-binding tail and a head region, containing the functional motor. The head region binds to microtubules and facilitates movement along their length in consecutive steps. This molecular motion doesn’t come cheap however, as the cell must pay for it with chemical energy stored in the form of ATP, the cells energetic currency. The head region of a kinesin molecule moves along by binding and destroying ATP, causing a change in the organization of the head group which ultimately results in the entire kinesin pulling itself forward on the microtubule. For every step that a kinesin takes, one molecule of ATP must be spent. This means that a cell must carefully regulate how and when it uses its kinesin transport system as it is energetically quite costly, and many other important cellular processes also require the use of ATP.

Meanwhile at the other end of the kinesin, the tip of the tail region is recognizing and tightly binding to cargo that needs to be transported to a new location. By working together, the head and tail regions of the kinesin molecule allow very large structures such as mitochondria to be efficiently moved around the cell to their final destinations. These mechanistic insights into the function of kinesin have advanced our understanding of cell biology immeasurably and highlighted its ability to influence a variety of biological processes.

The discovery of kinesin not only furthers our understanding of basic biology but provides new insights into the pathology of human diseases. These diseases include various forms of cancer, Alzheimer’s disease, a neurological disease called Charcot-Marie-Tooth disease Type 2A (CMT2A) and polycystic kidney disease. The complex nature of cellular processes such as kinesin-mediated movement makes teasing apart the different contributing factors of complex diseases like these challenging. By better understanding the molecular mechanisms of these neurological diseases and other kinesin-related diseases, treatments may begin to be developed resulting in improved quality of life or even a complete curing of disease symptoms. 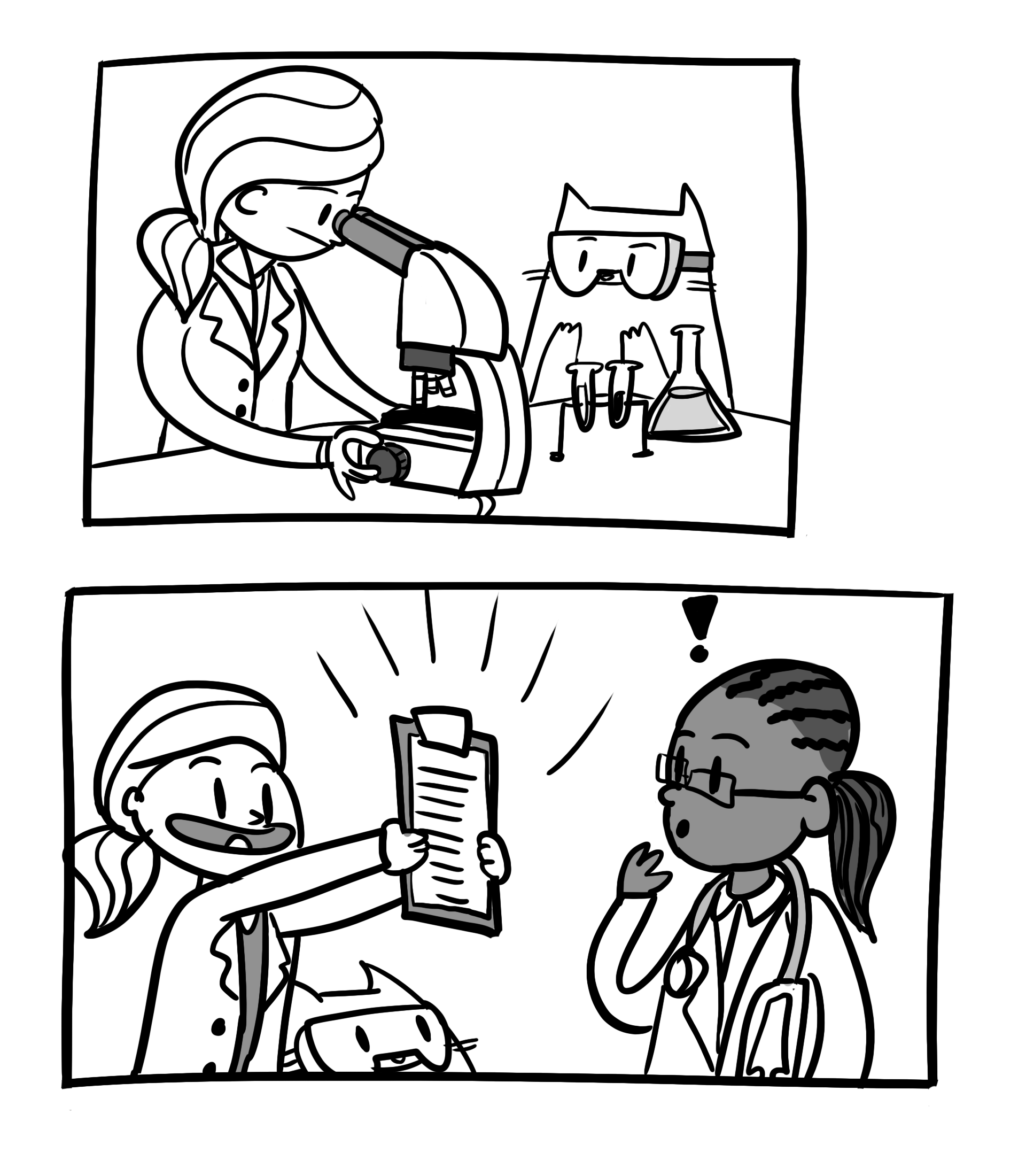 Undoubtedly, Ronald Vale’s exciting discovery in the mid-1980’s marked a major event in the history of cellular studies. Providing pivotal insights into fundamental biology and disease pathology alike, his pioneering work has created many exciting opportunities for continued investigation into the inner workings of the cell. Ronald Vale is a 2019 recipient of the Canada Gairdner Award, a prestigious honour that recognizes biomedical scientists behind the most exciting and impactful research every year. The work of visionary scientists like Ronald Vale allows us to constantly push the boundaries of what we imagine to be possible, and the discovery and continued characterization of the molecular motor kinesin certainly has cellular science moving in an exciting direction.

The fact that Dr. Vale discovered kinesin using nerve cells from giant squids might sound strange, but in biology, it’s not uncommon to make discoveries by studying other organisms. Why do you think this is the case? Look up the term model organism, and discuss an example of a model organism.