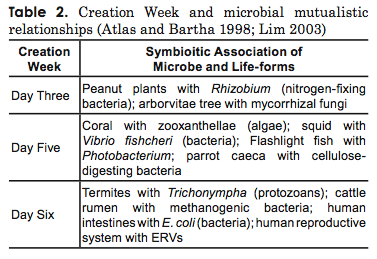 – – –
ABSTRACT:
The world of germs and microbes has received much attention in recent years. But where do microbes ﬁt into the creation account? Were they created along with the rest of the plants and animals in the ﬁrst week of creation, or were they created later, after the Fall. These are some questions that creation microbiologists have been asking in recent years. Ongoing research, based on the creation paradigm, appears to provide some answers to these puzzling questions. The answers to these questions are not explicit in Scripture, so the answers cannot be dogmatic. However, a reasonable extrapolation from biological data and Scripture can be made about the nature of microbes in a fully mature creation. This article attempts to provide reasonable answers to when microbes were created and is meant to stimulate discussion and further research in this area. Very little has been written in Bible commentaries or in creation literature on the subject of when microbes were created. Some have postulated that microbes were created on a single day of Creation, such as Day Three—when the plants were made. This is partially due to the “seed-like” characteristics that bacteria and fungi have—therefore classifying microbes as plants. In addition, we observe microbes (such as Escherichia coli) isolated in the lab and we tend to think of microbes as individual entities much like birds or ﬁsh or animals and, therefore, created on a single day. However, in nature, the vast majority of microbes live in biological partnerships, not in total isolation. The natural symbiosis of microbes with other creatures is the norm. Therefore, we postulate that microbes were created as “biological systems” with plants, animals, and humans on multiple days, as supporting systems in mature plants, animals, and humans. This idea is further supported by the work of Francis (2003). Francis calls microbial symbiotic systems a biomatrix, or organosubstrate. He proposes that microbes were created as a link between macroorganisms and a chemically rich but inert physical environment, providing a surface (i.e., substrate) upon which multicellular creatures can thrive and persist in intricately designed ecosystems. From the beginning, God made His creation fully mature, and complex forms fully formed. This would ensure continuity and stability for the times to come. Although we cannot be certain as to speciﬁcally when the Creator made microbes, it is within His character to make entire interwoven, “packaged” systems to sustain and maintain life.