Our Earth is filled with finite resources that we, as the Human Race, exploit for personal gain. Oil, Fish Stocks, Forests, Clean Air, and water are just a few of the resources that nobody “owns,” but everybody needs in order to survive. However, in our current system, nobody who is taking away these natural resources from the whole of us has to pay back into the natural system. Thus, there is a great incentive to consume all of the available resources before somebody else gets to them, Garrett Hardin called this nuance the “Tragedy of the Commons.”

Let’s take Smurfs as a natural resource. There are 100 smurfs living in smurf village and they do not reproduce. Every Saturday in the 1980s, entertainment producers broadcast a show documenting the life and times of Smurf Village, and made money from the advertising revenue brought in from millions of viewers watching the show. The cartoon’s producers use the smurfs in the manufacture of intellectual goods. 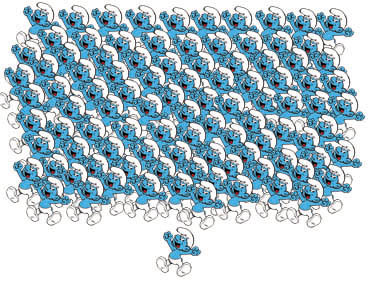 The intellectual use of the smurfs does nothing to detract from their smurfiness. Just as Thomas Jefferson said, “He who receives an idea from me, receives instruction himself without lessening mine.” Similarly, you can draw a smurf without taking anything away from anyone else’s use for the smurf.

Also every Saturday, Gargamel, the smurf’s antagonist, tries to catch the Smurfs so he can convert them into gold. Gargamel wants to use the smurfs in the manufacture of material goods.

Market Logic also tells us that Incorporated Businesses have human rights and that an Invisible Hand will make everything work out the best for everybody in the end. So maybe Market Logic isn’t all that logical after all.

As an individual, Gargamel has a right to pursue wealth; however, that right ends where it unfairly begins to trample on the rights of others to pursue wealth. Gargamel doesn’t have the right to run the Cartoon’s Producers out of business and ruin everybody else’s fun just so he can get rich and refurnish his castle and play sugar-daddy to the town harlots, but Market Logic says he can do exactly that!

So the Market Game isn’t very fair. Lucky for us, Market Law, unlike Natural Law, is a human social construct, which means we have the ability to change the rules of the game so that Gargamel does have to compensate everyone for taking our Smurfs.

So what is the market value for a smurf?

Gold is valued at about $800 an ounce presently. If we make the generous assumption that a single smurf can be converted into a pound of gold, then that’s $12,800 a smurf! No wonder Gargamel wants the Smurfs so badly. It only costs him the time it takes to grab and process a Smurf to make a cool $12.8 grand! Cha-ching! 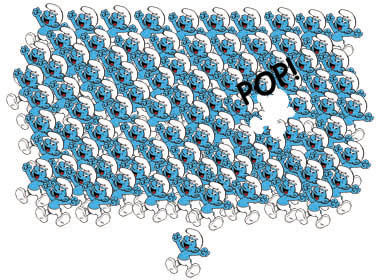 Gargamel’s profit means there are only 99 Smurfs left in the world for the rest of us to enjoy. We still have to figure in the smurfs’ profitability to the cartoon’s producers:

Let’s say the show earns the producers $1 Million dollars a week in advertising revenues. That means, dividing the entertainment effort across 100 smurfs, each smurf is worth $10,000 a week to the cartoon’s producers.

So Gargamel’s $12.8k one-time profit will cost the Smurf Cartoon $120k over the next year, as the production must now work one percent harder to find enough Smurf antics to fill a show’s content, and the remaining 99 smurfs are all now worth $10,101 each to the producers [2].

And that’s just a small percentage of a Smurf’s actual value. How do you define the monetary value of the wealth of knowledge an Evolutionary Theorist, Biologist, or Anthropologist will surely gain from studying the Smurfs? How do you set a price on instilling a sense of wonder in a child with smurfs?

So the very existence of the smurfs has a definable market value and an intangible value. The failure of the market is that Gargamel doesn’t have to compensate the rest of us for our Smurfs. He can just take our smurfs for his own selfish ends.

So in order to prevent Gargamel from smashing all the Smurfs into gold, or Coal Plants from giving them neurological disorders by dumping mercury all over them, or farms from polluting their water with run off fertilizer we need to establish a market system that approximates the value of smurfs. We need Smurf Credits, which are like Carbon Credits, only cuter.

Market Logic needs to play by the rules of Real logic, which tells us that potable water, clean air, biodiversity, coal, oil, and countless other natural resources are things those of us living on spaceship Earth all require to survive. They are our birthright.

The Smurfs belong to everyone. They’re our smurfs. The Gargamels aren’t playing fair. They’re ripping us off, and we have to stand up for ourselves.

Everybody owns one of 6.5 billion shares of planet Earth. We need to exercise our rights and responsibilities as stockholders.

Or as the smurfs would say, “We need to smurfercise our smurfs and smurfibilities as stocksmurfers.”

1. How Gargamel intends to convert Smurfs into gold, an element, is unknown to us. We might assume he owns an Atomic Supercollider, which he intends to put the hapless Smurf in, constructed under his castle. It’s like Japanese Whalers claiming to gain scientific knowledge about living Blue Whales by killing them. Greed doesn’t have to make sense.

2. Because of the individual nature of smurfs, their values may vary widely. Jokey, Hefty, and Papa Smurf might be worth substantially more than, say, Brainy Smurf, who nobody likes but me.