Approximately 23% of Canadians [1] and 200 million [2] people worldwide are considered obese, an increase from 10 years ago. Obesity is usually associated with but not limited to developed nations. In addition to social stigmas, there are significant health risks that come with being overweight. Studies have shown that having excess weight increases susceptibility to diabetes, cardiovascular disease, high blood pressure and stroke, as well as certain forms of cancer. What causes obesity? The traditional view is that overeating and lack of exercise are responsible for weight gain. Thus, a greater input than output of energy will result in increased fat storage. This explanation is true but incomplete. It is generally thought that only a person’s degree of willpower and environment dictate how much one eats and exercises. Recently, however, researchers have found a biological factor which plays a role in weight regulation.

The concept of a biological factor in weight regulation is not new. The hypothalamus is a gland that regulates eating patterns, body temperature, and metabolism. Scientists understood this but were not sure how the hypothalamus received information as to the amount of fat that a person had in store. The lipostatic theory proposed that there was product of fat metabolism that circulated in the blood and acted as a signal to the hypothalamus. The lipostatic theory was supported by an experiment carried out by Hervey in 1959 [3]. In this experiment, the circulatory system of a rat with a lesion in the hypothalamus was surgically joined with the circulatory system of a normal rat. The rat with a damaged hypothalamus overate and grew obese, whereas the normal rat, once it was “hooked up” to the other rat, grew thin. An explanation for this result was that the obese rat was producing some of “satiety factor”, which it couldn’t respond to but the normal rat could.

Leptin is a hormone that is involved in the long term regulation of body weight. The word comes from the Greek word “leptos”, meaning thin. It is produced primarily by fat cells, but cells in the gut and placenta also make leptin. It circulates in the blood and acts on different tissue including the hypothalamus, skeletal muscle, and liver. Leptin is a protein that consists of 167 amino acids and has a molecular weight of about 16 kD or 16,000 g/mol. The DNA sequence for the protein was determined by Friedman in 1994 and was found on the obese (ob) gene [4]. The leptin receptor, the molecular structure on the cell surface that binds with leptin, is encoded by the diabetes (db) gene. 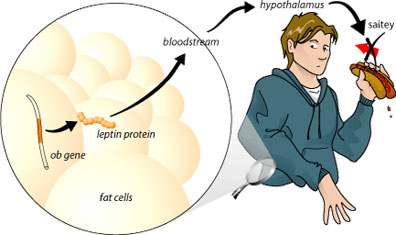 Figure 1: The Leptin feedback loop. the ob gene in fat cells encodes the leptin protein, which triggers the hypothalmus to suppress appetite.

Weight Loss in Mice With Mutations in the Leptin Genes

Mice with mutations on both ob genes (ob/ob mice) cannot produce leptin so they are unaware of when they have sufficient amounts of fat stored. As a result, these mice overeat and become obese. In an experiment it was shown that injection of recombinant leptin into these mutants resulted in reduced appetite and weight loss [4]. Since this discovery, researchers have been trying to understand how leptin works and whether or not it can be used as a treatment for obesity.

It is also possible to have a mutation in the leptin receptor DNA sequence, which is found in the diabetes (db) gene. Conversely, mice with defects in their leptin receptor genes have high (10 times) levels of leptin in their blood. It is believed that this is some type of compensation [5].

A double mutation for the leptin or leptin receptor genes in humans is rare; however, these individuals, like the ob/ob and db/db mice, are obese. Heterozygous mutations result in moderate obesity.

Correlation of Leptin Levels to Weight

Leptin and the Feedback Loop

Leptin acts within a feedback loop to regulate body weight. In normal metabolism, high leptin levels indicate sufficient energy stores and low levels indicate a starvation mode. Leptin is involved in long-term regulation of weight because levels don’t increase immediately after a meal. As previously mentioned, the leptin receptor is expressed in various tissue such as the muscles and the gut, but it is especially expressed in the ventromedial hypothalamus (VHM). In response to leptin level, the VHM will produce varying levels of neurotransmitters and neuropeptides that regulate food intake and body weight. It reduces the effects of neuropeptide Y (NPY), which is a feeding stimulant. It promotes a-melanocyte-stimulating hormone (a-MSH), which acts as an appetite suppressant. Leptin may also suppress other feed stimulating hormones including melanin-concentrating hormone (MCH) and endocannaboids and increase the effects of appetite suppressants like cocaine-amphetamine-regulated transcript (CART), bombesin, and corticotropin-releasing factor (CRF) [6]. In addition to food intake, leptin also moderates the burning of fatty acids in skeletal muscle, i.e. high levels stimulate the metabolism. Depending on food intake and energy expenditure, the size of fat cells will vary. It has been shown that the rate of production of leptin in fat cells depends on cell size [6]. Leptin receptors have also been found on pancreatic b-cells, which produce insulin. It has been shown that leptin enhances the effects of insulin [6] and it is possible that insulin may stimulate the release of leptin in return [3].

Other Roles of Leptin

Leptin also plays a role in reproductive function. It regulates the onset of puberty in women. Individuals deficient in leptin tend to mature sexually at a later stage. This could be related to amount of fat that is stored. For example, many athletes (people with a low percentage of body fat), do not have their periods.

Leptin has also been implicated in immune system functioning and the development of bones.

Leptin as a Treatment of Obesity

The administration of leptin acts differently from food restriction and exercise. Diet and exercise can result in a loss of both fat and muscle, whereas taking leptin results in fat loss. Good news right? Well not exactly: Leptin has been shown to have therapeutic effect in patients with defects in their ob genes. In 1999, an experiment was carried out to determine whether recombinant leptin could be used to treat obesity in a girl who was homozygous for the ob mutation. After receiving daily injections for one year, the girl’s appetite and food intake decreased and she lost 36 pounds of which most was fat [7,8]. However, it is uncertain how therapeutic leptin will be in individuals without genetic defects. So far, no definitive studies have shown that leptin will cause weight loss in all individuals [8] indicating that obesity is likely to not only be caused by biological factors. In studies with mice, it was found that some strains became obese after being fed a high-fat diet (diet-induced obese mice or DIO mice), whereas some mice did not. These DIO mice exhibited a partial response to leptin therapy [6]. This suggests that a subset of the population may be predisposed to obesity and environmental factors may alter leptin sensitivity. It is for these individuals that leptin may be beneficial [6].