PET or Positron Emission Tomography scans have become an important aspect of medical imaging and diagnoses, allowing doctors to look into the human body as never before. PET scans are different from other medical imaging techniques because they do not actually look at the body itself. Instead, PET scans look at bodily process by detecting the decay products from radioactive tracers injected into the body. Radioactive tracers are designed to mimic naturally occurring substances and tend to deliver less radiation than an X-Ray.

When the radioactive tracers decay inside the body, they release a positron, the antimatter equivalent of electrons. When the positron encounters one of the billions and billions of electrons inside your body, it annihilates in a flash of light called gamma rays-it is these gamma rays that are the positron emissions which PET scanners detect. The donut ring of the PET scanner is lined with gamma ray detectors.

There are many types of medical imaging techniques available to doctors and patients. Each techniques use slightly different technologies, allowing the doctor to focus on different aspects of the human body.

The simplest and most common technique used to look into the human body is the X-Ray. X-Rays are high-powered beams of light that can pass through some parts of the human body, like skin, but are stopped by other parts, like bone. Using X-Rays to expose film (much the same way that visible light exposes film in a camera) allows doctors to examine the skeletal structure with ease.

CT or CAT, Computerized Axial Tomography, scans also use X-rays but in a slightly more complicated way. A CAT scanner consists of a donut shaped ring containing numerous X-Ray tubes that shoot out beams of X-Rays. Patients slide through the donut hole while X-Ray detectors that are also around the donut ring record the X-Rays after they have traveled through the body. The computerized component of CAT scans involves interpreting all the X-Ray signals and combing them into a coherent image. Because CAT scanners only take X-Ray pictures of your body in thin slices, computers are needed to combine each thin slice into a comprehensive three-dimensional image. This technique of looking at the body in thin slices is called Tomography. CAT scans image the body in slices perpendicular to the axis stretching from the feet to the head. These slices fall in the axial plane of the body.

Ultrasound imaging uses a completely different technology than X-Rays. An Ultrasound probe emits ultrasonic sound waves, sounds above the range of human hearing, into the body. While most of these ultrasonic sound waves travel straight through the body, a small amount reflect off the transition layers between different types of tissue. The echoes from these transmission layers are picked-up by the Ultrasound probe, fed into a computer and then rendered into a two-dimensional image. Ultrasound technology uses sound echoes to look into the human body much the same way bats and submarines use sound echoes to see.

MRI, or Magnetic Resonance Imaging, uses magnetic fields to peer into the human body. The MRI machine contains a very large magnet that surrounds the patient with an intense magnetic field. When patients are immersed inside this magnetic field all of the billions and billions of hydrogen atoms inside their body align with it. Inside the MRI machine, radio frequency pulses are applied to specific parts of the body to excite some of these hydrogen atoms. Images are created based on how the exited hydrogen atoms lose their energy. These images are fed into a computer to generate an incredibly detailed look inside the human body.

How is PET different?

PET scans are different from all the other types of medical scans because they never actually look at the human body itself. Instead, PET scans use radioactive chemicals to look at different processes inside the human body. The actual PET scan machines are similar to CAT scan machines as they are both donut shaped and use axial tomography. But unlike CAT scanners, the donut ring of PET scanners is lined only with detectors. These detectors are used to pick up positron emissions.

The important thing about positrons is that when they encounter electrons, they annihilate in bursts of light called gamma rays. These gamma rays are the positron emissions that the PET scanners detect.

Figure 1. How the PET scan works: Radioactive tracers are injected into the patient before the PET scan. When these decay, the emit a positron which annihilates with electrons present in the body producing two gamma rays in opposite directions. The PET scanner detects all rays resulting from these sorts of interactions and a computer produces a final image.

Before undergoing a PET scan, patients are given radioactive tracers. When these radioactive tracers decay, they emit positrons that soon annihilate with one of the billions of electrons inside your body to produce gamma rays. These gamma rays are always emitted back-to-back, or in the opposite direction from each other. This allows PET scanners to extrapolate where in the body the gamma rays originated.

Worldwide, 95 % of PET scans use a tracer known as FDG, which is a fluorine-18 atom attached to a glucose molecule. FDG scans are used to detect and examine cancerous tumors throughout the body. FDG scans can also be used to study the fine detail of sugar metabolism in the brain. At TRIUMF and the University of British Columbia Hospital, the PET scan group focuses specifically on brain activity. 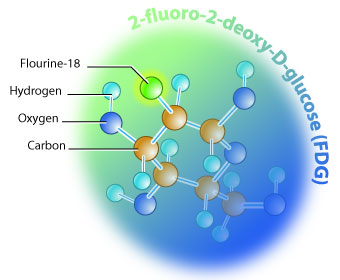 Figure 2. 2-fluro-2-deoxy-D-glucose. This positron emitter has a half life of 109.8 minutes and is the most commonly used radioactive tracer in PET scans.

There are a variety of radioactive tracers that allow PET scanners to examine different aspects of brain function. One example is the Oxygen-15 radioisotope, used to study oxygen metabolism in the brain. Oxygen-15 can also be attached to carbon monoxide for the study of blood volume, or to water for the study of blood flow in the brain. There are hundreds of radioactive tracers available for PET scans, however, only several dozen are commonly used.

The Cyclotron and Rabbit Hole

To create these radioactive tracers, doctors and technicians make use of a particle accelerator called a cyclotron. Cyclotrons are high-tech machines used typically in nuclear and particle physics.

Radioactive tracers are designed to decay relatively rapidly so that there is little delay between the time that they are ingested and when they start to produce a measurable signal. Carbon-11, for example, has a half-life of only 20.3 minutes. Most PET scan groups do not have a cyclotron located close enough to create and deliver enough radioactive tracers before to many of them decay. Fortunately for the University of British Columbia Hospital and the PET scan group, their cyclotron is located at TRIUMF, only 2.4 kilometers away. Yet even though TRIUMF and the UBC Hospital are so close, they are still too far apart to package and drive the radioactive tracers between them.

To solve this dilemma, TRIUMF at UBC hospital scientists have created the world’s longest rabbit hole. This rabbit hole is a 2.4 kilometer long pneumatic pipeline that connects the cyclotron at TRIUMF to the PET scanner at the UBC Hospital. The radioactive tracers are dropped into the pipeline at one end and hop out the other. The rabbit hole allows PET scientists to make as much use of their cyclotron as possible.

As well, the UBC PET group is constantly looking for new radioactive tracers to help improve the PET scanning technique and process. Combined with the expertise at TRIUMF, the UBC PET scan group offers unique opportunities in PET scan imaging.