Weird Tales magazine is a horror, science fiction, and fantasy periodical established in 1923 that became famous for publishing such literary geniuses as H.P. Lovecraft of Cthulhu Mythos fame and Robert E. Howard of Conan the Barbarian fame. The glory days of Weird Tales occurred back in the 20s and 30s and after that time the magazine has been sold and purchased by different companies, but none of the various reincarnations of Weird Tales ever truly lived up to the magazine’s initial years. But even in the wonderful early days, when they were printing stories regularly by Lovecraft and Howard, Weird Tales miraculously never had a circulation above 50,000 readers(!), while other pulp magazines had circulations of around 300,000 subscribers.

Whenever I think of Weird Tales magazine, I recall my father telling me old Conan the Barbarian stories that he read back in the early 60s, which I assume were first published in Weird Tales. I loved the Conan stories my father would recount but I was disappointed that he didn’t have any of the original books; and it struck me as bizarre that I couldn’t simply go out and purchase Robert E. Howard’s books and read them myself. Only later were Howard’s original Conan tales collected together and republished. But after finally reading them, I realized my father had remembered the stories differently than the originals, yet I liked his versions a little better.

Weird Tales also reminds me of the enigmatic and reclusive writer, H.P. Lovecraft, who adored macabre fiction throughout the ages and collected every copy of Weird Tales since the magazine’s birth. At one point, Lovecraft was actually offered the lead editor position at Weird Tales by publisher J.C. Henneberger, the man who set up the magazine, but Lovecraft turned it down, not wanting to relocate to Chicago. Farnsworth Wright, a journalist, accepted the position in Lovecraft’s place and became the most famous editor associated with Weird Tales. But Wright showed signs of being a literary incompetent and a subnormal when he rejected excellent stories by Lovecraft and Howard that later went on to become classics in the field of fantastical literature, such as “The Shadow over Innsmouth,” by Lovecraft and “The Frost Giant’s Daughter” by Howard. In fact, toward the end of H.P. Lovecraft’s career, Wright rejected his work so frequently that Lovecraft actually STOPPED WRITING FICTION ENTIRELY, convinced that he had no talent and was a literary failure. So tragic, what a waste. Wouldn’t it be incredible to actually hold and read one of the original issues of Weird Tales from the 20s or 30s that featured one of Lovecraft’s tales? I’ll have to look on Ebay soon for some past issues.

During the course of my writing career I have sent about ten or twelve fiction submissions to Weird Tales magazine, but none were ever accepted. Recently however I had a new idea. I would send Weird Tales one of my infamous ‘concrete primes,’ hoping they would print it along with my byline. A concrete prime is a mathematical entity I invented that involves prime numbers – integers with no divisors other than themselves and one – along with a visual component to the layout of the number; i.e. the digits are arranged in such a way that a word or phrase is “pictured” in the decimal expansion (see an example in my letter below).

Now why would I want to send Weird Tales a concrete prime? Isn’t that too weird even for Weird Tales? Nope. They print stories with a science fiction tinge all the time, I’m sure. And math is a large part of science. Also I wanted to send them a prime because I’m a prime hunter. I like to find large primes with interesting or strange properties. The primes I “build” to spell out certain words are the ones I call examples of “concrete math” because they remind me of concrete poetry (see the letter below for a definition). And because my concrete primes are sufficiently weird and also have a macabre element, I thought Weird Tales might like the chance to print one, or at least send me an interesting response. They probably won’t publish my prime, but it was still fun to try. Here is the letter I sent to the Weird Tales offices via snail mail:

Please find below a prime number that spells out WEIRD TALES in its digits. I would be honored if you would print this prime in any section of your magazine with a byline stating, “Found by Jason Earls, author of Red Zen, Cocoon of Terror, and How to Become a Guitar Player from Hell.” Thanks for your consideration. 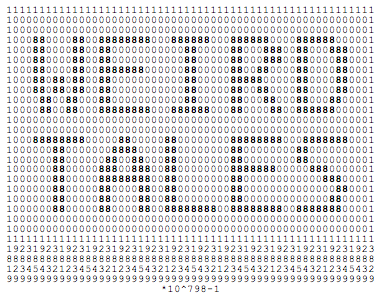 More info on the concrete prime above: Its full decimal expansion contains 2366 digits and it was found with the freely available program, WinPFGW. Classes of numbers that possess a certain visual component when the digits are arranged in a specific way is a concept closely related (in my opinion) to “concrete poetry” (poems in which the typographical arrangement of symbols or words plays a direct role in conveying the “meaning” of a poem); hence, I have dubbed numbers like the WEIRD TALES prime above, “concrete mathematics.” But I have also thought of simply calling them, “WEIRDematics.”

Surely you can see how ‘WEIRD TALES’ is spelled out in the bolded digits above? Cool, isn’t it. I hope Weird Tales prints it on the cover of their next issue with some wicked visual effects surrounding it. To tell you the truth, finding the Weird Tales prime above was not easy. At one point, my computer actually overheated and began to smoke. Then, like some numerical phantom of perversion, like a monstrous apparition from Hell almost unnamable in its atrocity, the Weird Tales prime number popped up on my computer screen and I stared at it with my body paralyzed with terror. The digits seemed to resemble clotted gray froth boiling in a wizard’s cauldron, or scales on the back of a glistening Extraterrestrial-God from the 24th dimension. Wait, I’m only kidding. I tried to get a little Lovecraftian influence in the text there. I am waiting now for Weird Tales response. Perhaps their editors are partial to mathematics. I know Lovecraft was interested in science and probably mathematics during his lifetime. Surely some of the editors will be able to appreciate math since we’re living in such a computer oriented age. And this prime is definitely weird. But on the other hand, perhaps primes are too nerdy even for Weird Tales. We’ll just have to wait and see. So far I have examined a couple of recent issues of Weird Tales and my prime has not appeared there yet. But maybe by the time you read this article they will have printed it on one of the covers. I hope so. I think I’ll do a Cthulhu prime next. Or one that spells out Conan in the digits. Yeah. Anyway, I’ll keep you posted on what happens.