How colds have been treated in the past

Colds have been treated in a variety of ways through the centuries. Ancient Romans drank onion broth to relieve symptoms. Twefth century Egyptian physicians recommended chicken soup (reportedly learned from the ancient Greeks). Colonial Americans drank tea or herbal concoctions of sage, hyssop, goldenseal, bloodroot, black cohosh and buckthorn (among others). This eventually evolved into honey and lemon. In a last ditch effort to relieve symptoms, a hot toddy laced with rum has also been served.

None of these treatments actually cure a cold. Even conventional treatments, such as decongestants and antihistamines, are only capable of relieving symptoms (often while causing side effects). There are some newer treatments that have been shown to shorten the duration of viral infection. An understanding of rhinoviral infection is needed in order to appreciate how these treatments work.

Rhinoviruses are non-enveloped viruses that are approximately 30 nm (3 x 10-8 meters) in diameter. This is so small that they are only visible when viewed under an electron microscope. The genome is made up of one linear, single-stranded RNA molecule. Rhinoviruses belong to the same virus family as the more widely feared poliovirus. This family is known as Picornaviridae, or small (pico) RNA (rna) viruses (viridae).

The route of entry for rhinovirus is via the upper respiratory tract. The virus generally gets into the nasal passage through inhalation of particles or touching of the nose with a contaminated hand. Whithin the next 10-15 minutes, it is transported to the back of the throat. Once there, the virus attaches to cell surface receptors known as Intercellular Adhesion Molecule- 1 (ICAM-1), and infection begins. Rhinovirus is amazingly efficient at producing infections. It has been shown that 95% of people exposed to a rhinovirus strain they have not previously encountered become infected, and 75% of those infected become ill.

The infection remains localized in the upper respiratory tract. This occurs for one very important reason: rhinoviruses are extremely inefficient replicators at temperatures above 33°C. The virus may find its way to the lower portion of the lungs, but temperatures there will be several degress warmer (approximately 37°C) and will not be conducive to rhinoviral infection. The virus will also be swallowed and it will end up in the stomach where both increased temperature and decreased pH will work to prevent infection. Unlike poliovirus, the rhinovirus capsid (protective protein coat) irreversibly disassembles at low pH, effectively inactivating the virus.

The incubation period for rhinoviral infection is only 8- 10 hours. The first symptoms generally occur in this time frame and peak in 1-3 days. Within 2- 3 days of infection, the local area becomes inflamed as immune cells invade. There is often a local edema, or swelling caused by an increased permeability of capillaries and blood vessels in the area to plasma. At this point, mucous membranes in the nasal passages begin to secret large volumes of fluid. The end result is symptoms of the common cold: sore throat, runny nose, watering eyes, sneezing, coughing, congestion and headache.

The cause of these symptoms is the immune response. Cells under attack by rhinoviruses release chemical signals called cytokines to attract immune cells and warn neighbouring cells that they are infected. These cytokines (interferon- gamma and interleukin-8) attract immune cells and stimulate a cytokine cascade, which further amplifies the immune response. More chemical messages are sent that result in the dilation of blood vessels in the area surrounding infection. They also increase blood vessel leakiness, glandular secretion, and stimulate nerve fibers. This stimulation of nerves can cause pain and trigger sneezing and coughing reflexes. All of this occurs as the body attempts to clear the viral infection.

Meanwhile, within infected cells, the virus is replicating as rapidly as possible and is continually shedding progeny viruses. These progeny viruses are capable of propagating the infection by invading nearby cells. When the immune response has reached its peak, the shed viruses are more likely to be swallowed, washed out of nasal passages, and sneezed or coughed out than to infect neighboring cells. This is the turning point of infection. This is also when the person suffering from the cold feels the worst.

At this point, the immune system begins to clean up the mess and return the body to normal. Infected cells are killed and cellular debris is removed. A new set of chemical messages is also sent. The production of cytokines and antibodies, calling for the proliferation of immune cells, is no longer needed. These new messages signal the immune system to return to normal. This entire process occurs in 10-14 days and, unfortunately, there is little that medical science can do to help.

Figure 1. Rhinovirus is made up of a protein capsid with a genome of one strand of RNA. Viruses with this simple structure are known as picornaviridae.

Symptoms, however, can be taken care of. There are dozens of over the counter medicines that can be taken to alleviate any combination of symptoms. Studies suggest that chicken soup may be equally effective at alleviating symptoms. It has been found that factors found in traditional chicken soup inhibit the movement of immune cells known as neutrophils to the area of infection. Neutrophils are an important part of the immune response, but are better suited to fighting bacterial infections. Although their primary role is phagocytosis of bacteria, they also release reactive oxygen intermediates that can damage healthy cells.

Is chicken soup the best medicine after all?

Consumption of chicken soup does not inhibit the immune response. Neutrophils are inhibited from moving to the site of infection thereby limiting the cellular infiltrate. Also, because the neutrophils are not able to release their reactive oxygen intermediates, the healthy cells are not being injured or killed, so there is less of a mess (cellular debris) to clean up when the infection has resolved. As with the over the counter medicines, chicken soup will not cure the cold . However, it is a tasty alternative to the sometimes foul- tasting medicines. 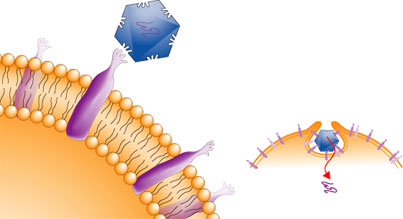 Figure 2. A proposed mechanism for the infection of cells with rhinovirus.

Zinc: Have they finally found a cure?

One treatment that has been found to shorten the duration of a cold is zinc. Zinc nasal sprays and lozenges have been proven to shorten the length of a cold from 10- 14 days to 4- 7 days. These sprays act in a very simple manner, they inhibit rhinovirus infection.

The rhinovirus must attach to the ICAM- 1 receptor in order to initiate infection. The binding site for the ICAM-1receptor is actually in a small crevice on the outside of the virus known as a binding pocket. Due to the nature of the amino acids (protein building blocks) in this pocket, zinc is also able to bind in this pocket. Once bound, the zinc physically blocks access to the binding pocket. Since the virus cannot bind to the receptor (ICAM- 1), the cells cannot become infected. The virus therefore becomes a harmless bundle of protein and RNA.

While zinc treatment is not recommended for daily use to prevent colds, if used at any point during a rhinoviral infection, it will prevent the propagation of infection. The zinc does so by blocking the binding pockets of virus shed following initial infection. There are drawbacks to this treatment. For instance, zinc is only effective in preventing rhinoviral infection and therefore will not shorten the length of those colds caused by other viruses (half of all colds). Also, an oral dose of zinc is ineffective. This is because the zinc must come into contact with rhinoviruses to inactivate them, and that will not happen if the zinc is in the bloodstream and the rhinovirus is in the nasal passages. Despite the limitations, the zinc treatment may represent a major step forward in the fight against the common cold.