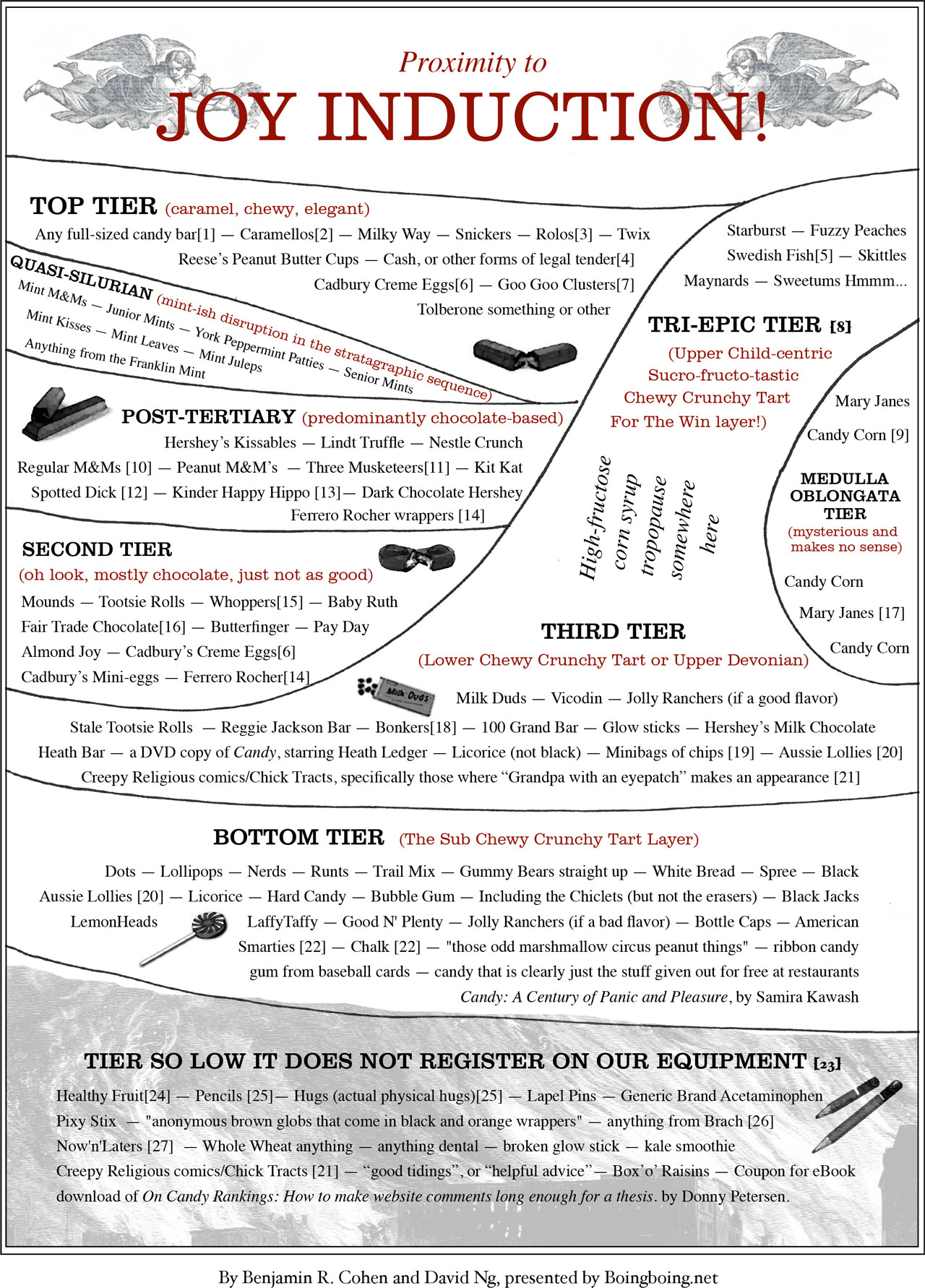 The “Candy Hierarchy” represents a thoroughly authoritative attempt to scientifically measure and classify Halloween Candy by assessing “joy induction.” More or less. Since 2006, Cohen and Ng have curated these rankings as an ongoing longitudinal study, one which reassesses itself through the use of the newest technologies (often teeth and jaws) and robust scientific peer review (comments). This article therefore presents the latest rankings with insight into the complex cultural underpinnings of “sweet” things. Specific notes of interest are two fold: (1) the emergence of a child-centric sucro-fructo-tastic gummi/chewy/taffi layer into the upper strata and (2) the recent prominence of corporatized corn fructose agents potentially, but we doubt it, influencing the hierarchy. Speaking of corporate influence, we are proud to be sponsored by Sweetum’s this year. Sweetums!: When fructose jitters can’t wait, try Sweetums, an American delight! In conclusion, these findings continue to demonstrate the enormous challenge in monitoring the constantly changing landscape of candy joy induction. Except, of course, for Whoppers – Whoppers still blow. And, good god, if I get one more box of Nerds. They’re gone. It’s done. Boom. Drop the mic.

This year, we had money. Gobs of money. Like lots and lots. If Everlasting Gobstoppers were money and not gobs used to stop things, we would be that. So much money it was crazy town for a while. It’s like, this year for Halloween we’re not going to be giving out Toblerone; we’re going to be giving out 3D printers that make Toblerone. But don’t let’s get all braggy. Our point is this: we got big cash and we did fancy research.

And what did this research look like? Well, all sorts of scientific things—things like booking time at CERN to collide candy corn and chocolate bars together in an attempt to explain why some fundamental particles (bodies) have (more) mass; things like using next gen sequencing methodologies to elucidate the genetic variation within populations of same-flavored and different-flavored Starbursts; things like setting up a Dancing-with-the-Stars-like competition where we had animated FTIR machines (which we printed with our disposable 3D printers) spit out competing glucose fingerprint codes to see which danced the best. Was most of this wasted time, effort, and money? Sure, maybe…the CERN data showed that colliding candy together at high speeds resulted in smaller bits of candy (intriguing); the Starburst genome project essentially suggested that Starbursts don’t, in fact, have genomes (curious); and it’s not clear that Dancing FTIR thing even made sense. But it’s not for us to decide the findings’ value. That’s what the peer community is for. Who knows how this knowledge might one day be applied? Besides, the stuffed coats at Sweetum’s tell us we can’t actually make the good data public until Sal in marketing vets it. I think this discussion is supposed to be redacted, actually. Rob, can you go check on that before this runs?

Regardless, we can state this: lo and behold, this year’s hierarchy reveals a bi-modal fracturing at the top strata. Previous rankings had found chocolate dominance at the top. The new hierarchy reflects discoveries made in the last year whereby some kids don’t think chocolate is top tier. Seemed like bullshit at first—because, really? Non-chocolate? But data don’t lie. So check out the graphic above.

Know what else? After years of failed get-it-right fast schemes, in this scheme we got it right. And fast. With some methodological retooling, more data sets, further research, and hundreds of additional peer review comments, the hierarchy is now entirely correct. There will be no need for comments. You can turn the internet off now. Yes yes, we said that last year, and the numerous years before. But that was before Twitter was big so nobody really read this. People always say they’re super confident, and you can never believe them, and don’t ever trust who ever acts like they’re one hundred percent certain. It’s just, if someone says something is entirely correct, you have to be a bit skeptical, right? But this time we are one hundred percent confident; this hierarchy is entirely correct. Why? Because of that corporate sponsorship. That’s why we’re proud to thank Sweetum’s Good Times High Fructosery for funding this year’s hierarchy. Sweetum’s, the quicker picker upper. Anyway, the scientific process is largely structured by corporate mechanisms and economic considerations, we’re told. Scientific research is underwritten by commitments to those problems our funders deem worthy of study. Right? And so here we are. Lots of sugar. Eventual diabetes. Meager dentistry. Yum.

PLEASE CONTRIBUTE TO THE PEER REVIEW BY GOING HERE (UNTIL NOV. 3rd, 2013), OR BY TWEETING WITH THE HASHTAG #CANDYHIERARCHY

3. These may be rolled to a friend.

4. Not sure if this should be included. Systematics are still on going – denomination appears to be key.

5. Like that fish you’ve seen on television. You know – the one which looks like it can breathe air and stuff.

6. Appropriate ranking may depend entirely on date of purchase versus date of opening. Experts in this field often refer to this dichotomy as “fresh CCE” versus “stale CCE,” or FCCE versus SCCE (Beschizza, 2011). Note that its interior has also been described as “pustulent.” (Petersen, 2010)

7. Sometimes spousal influence forces these placements as with, ahem, this primarily southern delicacy.

8. Blame the children on this one, Canadian children too. Also, sponsored by Sweetums (“Sweetums!: When fructose jitters can’t wait, try Sweetums, an American delight!”) whose corporate dollars may or may not be messing with your heads.

9. Always a contentious subject with a rich history of controversy. Briefly: Candy Corn, as of 2006, remained unclassified, but as of 2007 had been tentatively placed in the Upper Chewy/Upper Devonian. 2008: no sighting. This year, we have elected to place in a new tier, although what this means exactly has yet to be determined.

11. Although has also been classified as packing material (Cunning, 2010)

12. Placed solely to acknowledge, make fun of, and possibly undermine British opinions. Google it, but be careful when you google it (2012).

13. This is from EU pressure, known in diplomatic circles as the “Hornby Concession” (see his many footnotes from the 2012 version).

14. In which we acknowledge the complex underpinnings of this here Candy ranking exercise: apparently, the wrapper of the Ferrero Roche gets a higher ranking than the candy itself (due to high artwork potential). (Son of Anthrodiva 2012)

16. The authors are curious as to which neighborhoods you belong to.

19. Oh smack, can you even imagine if you got Fritos?

20. You know, we don’t even know what this is, but, hell, your sister marries an Australian, they have a kid, now you’ve got a niece, and you want a nice life for her, you want her to have a stake in the hierarchy, so okay, Aussie Lollies — Picnic bars, cherry ripe, Frys Turkish delight, probably something Chazzwozzer-based too, knock yourself out.

21. In a word, surreal… Plus grandpas with eyepatches always make everything better. Pretty sure, this is reproducible. (Gyrofrog, petertrepan, Koerth-Baker, Olsen 2012)

22. By some accounts, these two are actually one and the same (Gadgetgirl, 2010)

23. Yet some would be just as well to be left off. Bit-o-Honey, for example, might be called a lower tier member, but why bother? It says to your trick-or-treaters, “Here, I don’t care, just take this.” The lesson of Bit-o-Honey is: you lose. Doorstep offers of lectures in civics, too. You’re making a social statement–“I hate you and everything you represent”– when you give these out.

24. Yes, we really meant fruit that is healthy, clean-cut upstanding fruit that takes time from its gym membership and all the demands that come with it to contribute a positive message of citizenship and camaraderie to the community. This isn’t a typo of healthy for healthful. (see U.M.H. 2011)

25. Research has further defined this relationship. Currently, it has been suggested that Blackwing Pencils > Hugs > Creepy Hugs > Pencils. (Lobster, Prufrock451, and Warreno, 2010)

26. Unless it’s something caramel, pronounced “caramel.”

27. Unless you eat them properly. To quote Anonymous, 2010: “The trick to realizing how brilliant and delicious Now ‘n Laters are is a two step process. The first step is to carefully read the name of the candy. “Now ‘n Later.” What does it mean, you ask? Well, it implies that the candy will be different “now” (when you put it in your mouth) and at some point “later” in time. A small leap of logic takes us to the second step: be patient. You need to suck on it for a while until it softens. If you skip this step, the Now ‘n Later will be an inedible, rock-like colorful brick quite worthy of the low end of the hierarchy. But if you are patient in your candy-eating process, oh the rewards you will reap!”