The planet Earth is approximately 4.6 billion years old. During the initial 0.7 billion years following its formation, the early Earth was heavily bombarded by solar system materials, such as comets and asteroid-sized objects. The energy released by the largest impacts was sufficient to evaporate the oceans and destroy any existing life on the Earth’s surface. The first signs of life evidenced by the fossil record came into being approximately 3.5 billion years ago [1].

Figure 1. The early Earth’s reducing atmosphere provided conditions for the formation of organic polymers from either terrestrial or extraterrestrial organic monomers

Life emerged through a complex chain of evolutionary events, dictated by the physical-chemical environment on the early Earth. The reducing atmosphere (one with only traces of oxygen and therefore a lack of reactive oxygen species which would attack chemical bonds), provided favourable energetic surroundings for the formation of relatively complex polymers from organic monomers which were already present on the primitive Earth. The monomers have been demonstrated to be from two sources: either formed from terrestrial synthetic pathways [2] or were derived extraterrestrially from solar system materials [3]. Over time, simple molecules developed into larger, more complex biological molecules and eventually to cells. Following further diversification, some cells developed that became metabolically capable of photosynthesis [4]. This caused a cascade of irreversible events, interconnected by biogeochemical cycles. The atmosphere of the Earth changed to that of an oxidizing one and subsequently developed an ozone layer. The introduction of oxygen no longer supported the development of new life forms from the primordial building blocks, but instead supported the biological development and diversification of the early microorganisms. The ozone layer served as a means of protection, filtering the harmful UV radiation. These dramatic changes transformed the early Earth into our present day biosphere.

Assembly of the first cellular life on the prebiotic Earth required the presence of three essential substances: water, a source of free energy and a source of organic compounds.

Liquid water is essential for all life today and it is highly improbable that life as we know it can exist in its absence. The exact origin of water on Earth is unknown; however, it has been suggested that water became available when the Earth cooled enough for water vapour to precipitate from the atmosphere. Water has also been suggested to be derived from rocky material formed in the Earth’s region of the solar nebula or delivered by comets [4]. Regardless of its source, water was present prior to the appearance of the first microfossils [3.5] billion years ago [4]. To polymerize small molecules to more complex forms, energy sources are required. Sunlight, lightning, volcanoes as well as the intense UV radiation that penetrated the primitive atmosphere prior to the formation of ozone provided substantial amounts of free energy. There is also evidence that young suns emit more UV radiation than older suns [4]. This implies that significantly more UV radiation was released during the stage when the Earth had a reducing atmosphere.

Biological compounds such as amino acids can be synthesized simply from the constituents of the prebiotic soup and the environmental conditions on the primitive Earth. The most widely accepted model for this phenomenon is Miller and Urey’s [5] . The experimental setup did account for an energy source, a reducing atmosphere, an aqueous environment, evaporation of the ocean and rainwaters, but was not able to simulate the effects of alternating day and night. This discovery was pivotal as it inspired a major effort on the part of others to determine whether other biologically important compounds were also present on the primeval Earth.

During Earth’s early collisional period, the planet was exposed to a substantial amount of extraterrestrial volatile material derived from meteorites and solar system material. These extraterrestrial materials deliver organic compounds to the modern Earth at a rate of approximately 107 kg/year [6]. During the bombardment period on the prebiotic Earth, this rate has been estimated to be 1011-1012 kg/year [4] and has been argued convincingly that this high input of organic carbon significantly contributed to the emergence of life, stocking the prebiotic soup. However, some researchers are skeptical as to whether these organic compounds would have survived the intense heating that accompanies the entry of large bodies into the atmosphere and their subsequent collisions with the surface of the Earth. To address this, theoretical calculations as well as physical experiments have been performed, demonstrating that some organic species can undeniably survive the impact and be delivered intact to habitable planetary surfaces [6].

It has been suggested that lipid molecules may have a hereditary potential and like proteins and RNA, have substantial catalytic capacities [9]. Expanding on these considerations, it has been theorized that lipids and amphiphilic molecules constituted the first systems capable of information storage, inheritance and selection [10]. As demonstrated by Deamer et al. [6] material extracted from the Murchison meteorite contained amphiphilic moieties, including long chain acids and alcohols. Furthermore, it has been demonstrated that irradiation of an interstellar ice analog produced similar amphiphiles [6]. Fischer-Tropsch synthesis reactions catalyzed by metal or mineral surfaces have also been viewed as a source of amphiphilic molecules [6]. These components, whether from meteoritic or synthetic mixtures, are capable of spontaneously forming stable membrane vesicles with defined compositions and organization, capable of selective permeability [6].

The earliest forms of life likely required membranes. Phospholipids are the primary components of modern cell membranes, but it is improbable that such complex molecules were part of the prebiotic soup. Instead, simpler membranogenic amphiphilic molecules probably served as precursors, which then evolved chemically to the varied and complex phospholipid form. Amphiphilic molecules have one end that favourably interacts with water molecules (hydrophilic) and another that is far less interactive (hydrophobic). This attribute of amphiphiles allows them to self-assemble into vesicles and bilayers. It is speculated that although modern phospholipids were absent, these amphiphilic molecules were abundant in the prebiotic environment, given that virtually any molecule that has both a hydrophobic and hydrophilic component is considered amphiphilic. Like to the primordial simple organic monomers, amphiphilic molecules have been demonstrated to be formed from both endogenous and exogenous sources [6]. These components, whether from meteoritic or synthetic mixtures, are capable of spontaneously forming stable membrane vesicles with defined compositions and organization.

When amphiphilic molecules self-assemble into membranes, their vesicular organization creates an effective permeability barrier between interior and the exterior aqueous compartments [7]. The selective entry of the early membranes that formed the boundary of primitive cells permitted the permeation of essential nutrients. However, less sophisticated than their modern counterparts, the early membranes would have been impermeable to larger, polymeric molecules, such as the precursors of nucleic acid and protein polymers. Thus, it follows that in order to encapsulate the larger moieties, a course of action in which the membrane bilayers are first disrupted, allowing entry, and then resealed to trap the molecular entities within was required. Laboratory simulations of hydration-dehydration cycles in intertidal zones or of an evaporating lagoon on the early earth have verified the ability of early membranous boundaries to encapsulate functional macromolecules [7]. This was a critical property of the early membrane microenvironments as only in this manner would polymeric products of primitive biosynthesis have accumulated in the encapsulated volume. Essentially, as the composition of the interior compartment became more specific, a population of these bounded molecular systems advanced and increased in metabolic complexity [7]. This was followed by the evolution of controlled cell growth and ultimately the emergence and growth of cells as we know them today [8]. The amphiphilic molecules on the primitive earth have undeniably undergone considerable evolution as the first forms of life emerged and acquired new catalytic capacities.

There is good evidence that membrane vesicles are the intermediate between prebiotic cells and the first cells capable of growth and division [9]. Indeed, the earlier a membrane structure was present on the earth, the easier it would have been for cells to assemble metabolic pathways and genetic material [8]. Organic compound concentrations in the water bodies of the ancestral earth have been estimated to be approximately one micromolar. The inherent self-aggregation of amphiphilic molecules would have constituted local high concentrations within the dilute solution of organic compounds. Held together primarily by weak non-covalent interactions driven by hydrophobic forces, the early amphiphilic assemblies would have been extremely stable over time. Regardless of stability, exchange of components and subsequent growth of the cell would have required only minimal energy [11]. Once formed, cell membranes also have the potential to maintain a concentration gradient, providing a source of free energy that can drive transport processes across the membrane boundary [11].

The molecular systems from which life emerged were likely subject to the same physical and chemical laws that guide self-assembly processes of current life [9] The high salt concentration of a marine environment would not have favoured the self-assembly of membrane structures due to the osmotic pressure it would have created across the membrane [7]. In addition, the prevalence of divalent cations in the ancestral environment binding to the anionic head groups of amphiphilic molecules would have greatly inhibited their ability to form stable membrane structures [6]. Thus, these parameters suggest that, from the perspective of membrane biophysics, the environment most suitable for the origin of life would be a pond, which has low ionic strength and a submillimolar concentration of divalent cations [6]. 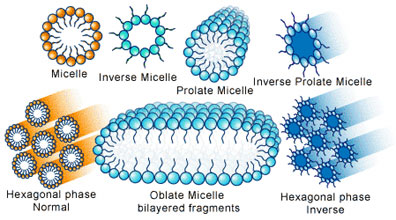 Liposomes are artificial vesicle membranes, which form upon hydration of membranogenic lipids in an aqueous medium [12] . They are commonly used as model systems, among others, for the study of the physical-chemical attributes of early membrane processes. Due to the diversity of the chemical nature of lipids, the physical-chemical properties of liposomes can be modulated to satisfy specific functional objectives, which is an invaluable tool. For example, the degree of bilayer packing and fluidity of the liposome may be controlled simply by selecting lipids with different acyl chain lengths. The lipid bilayer organization creates an effective permeability barrier between the interior and the exterior aqueous compartments whereby hydrophilic agents are situated in the interior aqueous core and hydrophobic agents are solubilized with the hydrophobic regions.

The origin of life required a combination of elements, compounds and environmental physical-chemical conditions. This suggests that many different perspectives and scientific disciplines must be harnessed to comprehend the origin of the biological world. Lipids and amphiphilic molecules, the building blocks of membrane bilayers, are definitive of life today. Accumulating evidence effectively demonstrates amphiphilic molecules to be the first biological molecules. Although viewed to have primarily structural roles, amphiphilic molecules and their ability to spontaneously form membranous microenvironments definitely underlie some of the earliest key events that led to the emergence of biological complexity. A number of unanswered questions surrounding the properties that characterize and could have spawned life require further research.

Acyl Chain Length-The length of the hydrocarbon groups that make up the hydrophobic “tail” of a phospholipid.