Advocates of biotechnology have consistently upheld the notion that the field contributes to human health care, environmental protection, and industrial-scale synthesis of complex chemicals. Despite the obvious importance of these areas, biotechnology also has much to offer to other fields. One of the oldest of these is the mining industry. The earliest use of microbial processes for mining occurred long before it was clear that microbes were responsible for the effects observed. At the Rio Tinto (Red River) mine in Seville, Spain, Roman era copper mine workings were rediscovered in 1556. Evidence suggests that the mine used water from the Rio Tinto – water containing a very high concentration of ferric iron owing to microbial activity in the area1. When the water from this river was irrigated onto copper containing deposits, the copper dissolved and later precipitated as smaller deposits that could be collected. Although the people at the time likely believed this process to be magic, we now know that it was the first recorded use of biomineralization.

A number of genera of bacteria have been shown to be important in biomineralization, including: Acidothiobacillus (previously Thiobacillus), Leptospirillum, Acidiphilium, Sulfobacillus, Ferroplasma, Sulfolobus, Metallosphaera, and Acidianus. Interestingly, these microbes represent Gram-negative, Gram-positive bacteria and Archaea, indicating that even within a superficially simple and inhospitable environment like a mine tailings pond, a remarkable diversity of life can be observed.

Bacteria involved in biomineralization are usually highly acid-tolerant, mesophilic (20-40°C temperature optimum) or thermophilic (40-70°C temperature optimum) chemolithoautotrophs. They are usually able to use reduced sulphur compounds and/or ferric (Fe2+) iron as electron sources. In most ore deposits both of these molecules are readily available in the form of iron pyrite (FeS2). Following exposure of buried pyrite to water and oxygen, a spontaneous oxidation takes place according to the following reaction:

This reaction begins to produce ferrous iron (Fe3+) – a powerful oxidant that is further capable of oxidizing mineral sulphides:

The most important product of these reactions is sulfuric acid (H2SO4). As a result, these reactions begin to alter the pH of the environment to favour the growth of acid-tolerant microbes that are important for biomineralization. The most common organism found is Acidothiobacillus ferroxidans (previously known as Thiobacillus ferroxidans). Once this bacteria begins to grow it uses the Fe2+ released in the second reaction as an electron source, thus regenerating Fe3+, the ion capable of oxidizing even more of the mineral sulphides. This process will continue until the pH of the water in the pile approaches 1 [1]. The entire process described above is known as acid mine drainage, and can be very environmentally destructive. The acid mine runoff is highly acidic and contains dissolved iron concentrations. If the runoff from the mining operation enters the surrounding environment, it can render entire streams, rivers, and lakes completely devoid of any eukaryotic life.

Consequently, when there is a risk of acid mine drainage in traditional mining operations, special care must be taken to prevent it. These preventative measures can include a number of techniques. These are designed to prevent either the initial oxidation from occurring, or the subsequent acidification of the water. Acidification can be interrupted by combining the sulphide-containing ores with material, such as limestone, that is capable of neutralizing the acid produced by the oxidation. This prevents the positive feedback loop generated by the bacteria.

How to Extract Ore Without Anaesthetic: Bioleaching

Despite the remarkably destructive potential of acid mine drainage, there is a silver lining to this industrial dark cloud. Many minerals are capable of forming sulphidic deposits, including copper, uranium, nickel, and cobalt. If large quantities of these metal sulphides are found, they can be commercially extracted using the principle of acid mine drainage. There are two approaches to tackling this type of operation. The first is called irrigation style bioleaching, one example of in situ bioleaching (Figure 1). In order to be considered feasible, the deposit itself must be relatively permeable to water, while the entire site is contained in geological structures that are impermeable to water, so that the mine drainage cannot enter any waterways. Artificial piles can also be created from crushed low-grade ore that is piled onto impermeable liners up to heights of 350 m. 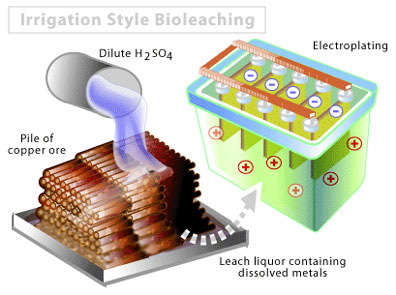 Figure 1. Irrigation style bioleaching. Crushed copper ore is piled and dilute H2SO4 is trickled through the pile. Bacteria oxidize the sulphide, producing acid. As the matrix containing the metal is destroyed the metal dissolves in the acidic solution to produce the ‘leach liquor’. This liquid is then subjected to electroplating to remove the metal ions from solution.

Regardless of whether the pile is artificial or carried out in situ, sulfuric acid, water, and air are then pumped into the deposit over a period of weeks to months. The reactions involved are similar to those above, except that the metal sulphide partially replaces the FeS2 represented. Following an incubation period, the liquid is then removed by pumping. This runoff is very acidic, and contains a high concentration of the metal of interest. The metal can then be isolated by a number of conventional techniques, including precipitation or electroplating. Approximately 20% of the world’s copper is produced by bioleaching, and that number is expected to rise in the years ahead [2, 3]. Within Canada, this type of process has been used to extract uranium from the Elliott Lake district in northern Ontario. For in situ piles, fresh water and an acid neutralizer can then be pumped into the deposit until standards within the runoff are below a minimally acceptable threshold.

The other major form of bioleaching is known as stirred tank processes. The name is fairly self-explanatory, as the process requires constructing large aerated tanks that are generally arranged in a series, so that runoff from one tank serves as raw material for the next (Figure 2). In this way, the reactor can operate in continuous flow mode, with fresh ore being added to the first tank while the runoff from the final tank is removed and treated. The ore to be processed is generally crushed to a very small particle size, to ensure that the solids remain suspended in the liquid medium. Mineral nutrients in the form of (NH4)2SO4 and KH2PO4 are also added to the tanks to ensure maximal microbial density is maintained. 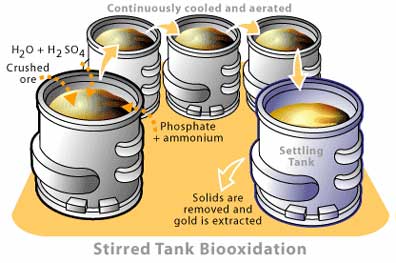 Figure 2. Stirred tank biooxidation. The slurry of crushed ore and liquid ore is moved from tank to tank to ensure adequate time for arsenopyrite oxidation. The last tank is a settling tank where the solids containing gold are removed and extracted using cyanide

Due to the extremely high cost of stirred tank reactors, they are only used for highly valuable materials. For gold extraction for example, this technique is usually used when the ore body contains high concentrations of arsenopyrite (AsFeS). This compound is extremely recalcitrant to chemical reactions and effectively shields the gold from the cyanide that is used to dissolve it. Thus, unlike irrigation-style bioleaching, where the liquid contains the material of interest, stirred tank processes are used as a pretreatment to remove low value sulphide material from higher value minerals, such as gold. The solid particles leaving the last aeration tank are then moved to a facility for chemical processing. This pretreatment can increase the yield of gold-bearing ore by twenty times over traditional crushing and immediate chemical extraction. These reactors can be truly enormous, with one such facility consisting of a series of 24 tanks, each holding 1 000 000 litres of crushed ore and liquid [4].

Even Bacteria Have to Deal with Waste Management…

Yet another example of biotechnology in mining involves a process called metal precipitation. This process is used to treat wastewater from mining operations, which, as described above, contains high concentrations of dissolved SO42- and Fe2+, as well as excess acid. This material cannot be released directly into the environment as it is extremely hazardous to stream and river ecology. In what is essentially a reversal of the procedure described that leads to acid mine drainage, sulphate-reducing bacteria like Desulfovibrio and Desulfotomaculum oxidize organic matter or H2 by using sulphate as an electron acceptor according to the following reactions:

The sulphide present then immediately reacts with any dissolved metal, producing an insoluble metal sulphide:

The metal sulphide is very inert and can be disposed of, provided it is not exposed to oxygen, lest the process begin again.

In many mining operations, this process is carried out in engineered anaerobic swamps. A large enclosure is first lined to make it impermeable. The wastewater is then allowed to enter the area where the pH is adjusted with limestone. As the pH increases, some iron precipitates and the rest of the material is passed into an area containing organic waste material. The degradation of the organic waste maintains the anoxic state of the containment pond. Microbial action reduces the sulphate present to metal sulphides that are then permanently precipitated within the passive reactor. The top of the reactor can be covered with topsoil and planted to restore the aesthetic potential of the area.

Biotechnology has played a pivotal role in the mining industry for hundreds of years. The use of bacteria has enabled for more efficient ore extraction, and purification of ore compounds. In more recent years, research has been devoted to developing more environmentally sound and efficient extraction processes and microbial remediation of mining sites. Future developments will likely include increasing the temperature at which stirred tank reactions can be carried out, by identifying or developing bacterial strains that have higher optimal temperatures. Higher temperatures translate into elevated reaction rates and evading the necessary cooling of these systems – an extremely energy intensive step. In addition, bacteria that are better able to resist the abrasion from the stirred tank process will also be very useful. These initiatives may also be much less environmentally destructive than conventional technologies – what we can hope to be the beginnings of a new generation of mining technologies.

4) Acevedo, F. 2000. The use of reactors in biomining processes. Electronic Journal of Biotechnology. 3: online.