Now, let me share the secret to my comfort breakfast – the almighty banana! Who would have thought! Banana is so readily available and cost effective that I had never thought of it being such a wonder food – a happy food! The reason why banana ranks as a top happy food is due to the great amount of tryptophan and tyrosine it contains. Both tryptophan and tyrosine are essential amino acids, i.e. we need acquire them from food intake because our body cannot produce it internally. They’re both precursors to “happy” neurotransmitters – serotonin and dopamine!

How are serotonin and dopamine made from tryptophan and tyrosine?

From the above diagram, you can tell that the making of serotonin and dopamine is basically identical! First, an enzyme called hydroxylase attaches an –OH (hydroxyl) group, high lighted in red, to the hexagonal rings of tryptophan and tyrosine. Then, another enzyme called decarboxylase comes in and removes the O=C-OH (carboxyl) group, high lighted in blue. Don’t you appreciate how your complex body operates on a relatively simple blueprint!

Let’s move on! And learn more about the “happy” molecules!

SEROTONIN, a.k.a. 5-hydoxytryptamine, is naturally produced in the pineal gland, which lies at the centre of our brain. It is actually more than just a “happy” neurotransmitter. It is essential to numerous body function including appetite control, sleep, memory and learning, temperature regulation, mood, behavior, cardiovascular function, muscle contraction, endocrine regulation and depression.

DOPAMINE, a.k.a. 4-(2-aminoethyl)benzene-1,2-idol, is produced in several areas of the brain including the substantia nigra. Like serotonin, dopamine also has other functions besides being a key element in providing feeling of pleasure. It is central to movement coordination, cognitive functions (by mediating signal transduction in the frontal lobe thus affecting memory, attention, and problem-solving in particular), latent inhibition and creative drive. But dopamine is actually most known in the reward system! Its release is stimulated by naturally rewarding experiences such as happy foods (bananas!), drugs, and sex.

Do you know? Dopamine is also synthesized in the process of banana riping/fermentation. Back in elementary school, I had a friend who was often high in the morning. I never really understand why until now… He told me once that he eats whole bananas, i.e. including the peel and skin, for breakfast! So, next time if you need a happy booster, just blend a “whole” ripe banana smoothie!

After understanding what serotonin and dopamine do, let us explore how they function as neurotransmitters. Keep in mind the definition of neurotransmitters – messengers within the brain which allow for the communication between nerve cells and effectors. 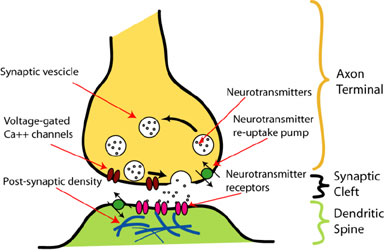 Image from Wikipedia (link)
As you can see from the above diagram, little packets of neurotransmitters (serotonin or dopamine) in vesicles are released from the end of the presynaptic neuron (yellow) into the synaptic cleft. The synaptic cleft is a nerve-nerve or nerve-muscle junction where a signal is released from one membrane and binds to a receptor in the second membrane. The neurotransmitters bind to receptor proteins on the postsynaptic cell (green). Sufficient interaction between neurotransmitters and receptors can excite the cell and/or passing along the message to the next neuron. Any excess neurotransmitter molecules are taken back up by the presynaptic cell and reprocessed (repackaged for future release).

Another structure of importance in this process is the Raphe Nuclei. The raphe nuclei are a cluster of nerve nuclei found in the brain stem, where serotonin is released into the brain. Serotonergic neurons (neurons that release serotonin) within the raphe nuclei have axons (nerve branches) which extend to many different parts of the brain, and this is the reason why serotonin affects many different behaviors.

Recall the process of how serotonin is synthesized in the brain. Messages are passed between two nerve cells through a synapse, a small gap between the cells. The cell that sends the information releases neurotransmitters (of which serotonin is one) into that gap. The neurotransmitters are then recognized by receptors on the surface of the recipient cell, and in turn, pass on the signal. Only about 10% of the neurotransmitters attaches to the recipient cell, the other 90% are taken up again by transporters, back into the sending cell. This process is called reuptake.

SSRIs relieve symptoms of depression by blocking the reuptake of the neurotransmitter serotonin into the presynaptic (sending) cell. This leaves more serotonin available in the brain, which will increase neurotransmission – the sending of nerve impulses – and hence, improves mood. SSRIs are called selective because they affect only serotonin and not other neurotransmitters.

Antidepressant drugs (SSRIs) such as Prozac are known to relieve depression within a couple of weeks, however, just like all other drugs; antidepressants may have side effects, some of which are nausea, sexual dysfunction, headache, and weight gain to name a few.

My personal view is that getting “happy” mood boosters – serotonin and dopamine – in that matter, is better through natural elements than that of chemical drugs altering the normal functions of our bodies. To that end, below listed are some food sources which contain a high level of tryptophan and tyrosine, stimulating the production of neurotransmitters (happy molecules), serotonin and dopamine. I call them Happy Foods!

So the next time you wake up to a cloudy gloomy morning, do what monkeys do best, and grab yourself nature’s happy pill, the almighty banana!