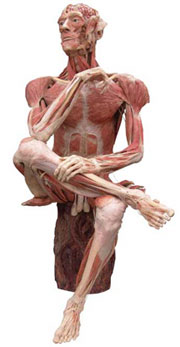 (BodyWorlds 3 is currently in Vancouver
at Science World, until January 14, 2007)

I had a train-wreck experience about Gunther von Hagens’ Body Worlds. I had previously heard nothing about the man, his work, or the show before we headed out to see it at Chicago’s Museum of Science and Industry, but one of my sources inside the museum world had mentioned that there had been a fair amount of controversy surrounding both von Hagens and the exhibit.

The exhibit was divided into anatomical systems: locomotive, nervous, cardiovascular, and digestive, plus a kind of gallery of awe—bodies in motion, human bodies and elements thereof placed in their jaw-dropping context. This last contained some interesting violations of the exhibit design, which seemed to lump together what should have been a gallery of the reproductive system and human ontogeny/development.

The basic design of the exhibit was to place glass cases centrally with a variety of full-body specimens placed around the edges. The cases were designed for two lines of visitors to view simultaneously from each side. This was absolutely necessary in terms of human-flow issues. However, the specimens were not always oriented in an equal opportunity way, so it was possible to have chosen poorly in terms of the side you viewed.

The whole-body specimens were on low platforms and most had no barriers between them and the visitor. They were placed well away from the wall, although many people didn’t seem to be taking advantage of this – the ability to view them from every angle was essential as each dissection was carried out from head to toe and front to back.

One serious oddity regarding the physical set up involved the last gallery, where the reclining pregnant figure, along with several embryonic and fetal specimens, were curtained off from the rest. This area also merited its own ostentatiously placed guard. I had no idea if it was originally envisioned in this way or if there was a story behind the separation. Whatever the reason, it’s disconcerting.

The pregnant figure was the culmination of a series of fetal development specimens beginning with the very early embryonic stages. The first of these was 99% uterus, where I was privy to a amusing, yet disappointing, discussion between two (20-ish, female) visitors:

“Look! You can see the tiny fingers!”

(They were Fallopian tubes to those of us not abused by bad biology education).

Other than the last gallery, the layout was stunning. The first two full-body specimens were relatively simple dissections revealing the depth and complexity of the muscular arrangement of the appendicular skeleton. For me, these were nothing particularly new. At this point in my life, I’ve dissected or supervised the dissection of probably 30 human cadavers and 20 different primate species. In learning and teaching anatomy (and the two are difficult to disentangle), there is a physical emphasis on geography and a theoretical emphasis on system. In the lab, you master the landmarks from every conceivable view, reducing the body to manageable regions. In the lecture hall, you ignore the distance between physical structures and try to master coordinated systems. To have the two entire systems juxtaposed in correct geography was one of the biggest “Ah ha!” moments of my intellectual life. It was also a profoundly moving experience. As P. Z. Myers so eloquently put it: “I am beautiful on the inside.”

Like the “Ah ha” moment, the next exhibit took a few minutes to sink in. It was an articulated skeleton with ligaments but no other flesh, reaching out toward the figure in front of it—the musculature of the same individual, arranged in the same pose.

Most of the full-body specimens at the exhibit were equally anatomically informative and artistically challenging. The “Chess Player” dissection brought me back to my first day in the lab as a student. The supervisor had prepared a similar laminectomy dissection (removal of the spines of the vertebrae and the top arch of the spinal canal to reveal the spinal cord and nerves emerging at each vertebral level). Each dissection group came through for a tour. Mine had three anthropology students and one med student who lasted about 2 seconds before face planting.

Med student mockage aside, the “Chess Player” was a fantastic piece, bringing the processes of intellect and motion together in a way that is often missing from hands-on dissection classes. (For example, at Pritzker, the brains of the cadavers had been removed for use in the dedicated neuroanatomy class, divorcing movement from thought.)

The thoroughness of representation and the depth of perspective contained in the specimens was astounding. My fingers ached to think of the painstaking work. Every conceivable view is represented somewhere, either in the cases or the full-body specimens. The juxtaposition of diseased and healthy specimens alongside those showing medical intervention (artificial joints, valves, arterial stents, etc.) was also highly effective. I was blown away, both as a scientist and consumer of art, by the arterial specimens. The arteries were filled with red polymer and the rest of the flesh and bone was dissolved away, leaving the three-dimensional structure rendered in the bold lines of the main vessels tapering into the incredibly delicate capillaries at the skin’s surface.

Amid the cases and specimens, there were floor-to-ceiling banners with classical anatomical drawings and other artwork regarding anatomical research, and some containing text reflecting on death, the body, and being human by scientists, artists, philosophers, etc. Some of the drawings were amusingly reflective of their period (e.g., a muscular diagram of a young man standing near, for some reason, a hippopotamus), but all really add to what von Hagens seems to be trying to do.

That is, to continue in the tradition of constructing forceful, persuasive images of and ideas about the authentic, natural glory of being human.

At the end of the galleries was a guest book and a blow-up of a completed donation form from someone who was determined to donate his body as a result of seeing the exhibit. I didn’t spend much time at the guest book after seeing an entry that simply said “It was kinda sick,” and another asserting that this “isn’t really for kids or toddlers.” I’d dispute that, having been fascinated by anatomy from a very young age. Personal opinion aside, there were numerous images about the exhibit and the lobby had clips from it running on televisions. If anything, the museum went overboard in trying to give parents ample information to judge whether the exhibit was appropriate for their children or not.

I’ve also searched around a bit to get a sense for the controversy over the exhibit. I’m surprised by the vehemence of reactions and the wide variety of objections being raised. Many take issue with von Hagens’ claim that his techniques and specimens are art (something he seems to be downplaying these days), relegating him, at most, to the status of craftsman (a distinction and demotion, I note, peculiar to Westerners who view art as a recreational excess, rather than something that exists in the middle of real life).

At least two authors of this type of criticism seem to have been so determined to sneer that they missed relatively straightforward scientific and artistic messages inherent in some of the pieces. For example, one was intensely critical of the “gimmick” of “Rearing Horse with Rider,” in which the human figure holds his own brain in one hand and his mount’s in the other. The viewer can approach closely enough to get the full effect of the horse’s immensity and just as that’s sinking in, the eye is drawn to the human brain positively dwarfing the horse’s.

Others insist that the so-called artistic placement obscures the anatomical information, citing, for example, the “Drawer Man” and the figure carrying his own skin like a coat. The former wasn’t included in this exhibit, so I can’t comment, but I thought that the volume of the skin relative to the individual’s musculature was both visually striking and informative.

Another seemed to think that the main point of the exhibit was to emphasize the similarity of human flesh to food. Although I find that an overly simplistic interpretation, I actually think that’s a message worth sending.

People are usually intrigued and repelled in equal measure when they hear that I used to teach anatomy.

A few years ago, I had a student share a story from his wife’s Girl Scout troop. They were working on a cooking unit with some whole fryers. One of the 11-year-old girls suddenly shrieked “Ew! They look like animals!”

But the largest category of criticism I found comes from those who feel that the exhibit denigrates humans by defiling corpses. Many deny that any information is conveyed. Others insist that von Hagens has no desire to convey information, only to shock. He has been called unbalanced, pornographic, psychotic, cold, calculating, and opportunistic. The words scientist, knowledge, and information frequently appear in sarcastic quote marks.

Other critics shift the focus from von Hagens to that which questions the motives of those who donate, often with pitying, contemptuous, or disbelieving tones. The specimen of the pregnant woman figures prominently in these critiques, demanding pity for her husband and loved ones, all the while insisting that she could not have known what von Hagens had in mind.

I’m not trying to pull rank, but I think it’s safe to say that I’ve put more thought into death and rituals of death than the average person. The tone of this criticism rankles, but doesn’t surprise me. It implies that individuals either have no right to determine what should happen to them after death, or that the idea of “informed consent” is a complete fallacy regarding one’s own physical remains. It’s particularly grating that the shrillest, most absolutist of these are devoid of any real consideration or appreciation for the plethora of different ways in which human groups treat the dead.

In my cultural anthropology class, I try to introduce the idea of the “Tao of Humanity” by drawing on Herodotus’ story about King Darius bringing Greeks and Indians together to talk about their rituals for the dead. The point is not that we eat or bury them, but that there is no human group that simply ignores the fact that death represents an individual and collective loss.

Bioarchaeologists have gone along for the culture-historical, processual, post-processual ride in trying to determine whether mortuary archaeology is telling us about the living, the dead, or neither. To pretend that those of us living in the Western world today have some kind of clarity on the subject is sheer hubris.

That said, there are some serious allegations that all of the specimens were not obtained via voluntary, informed consent. There have been reports in the German media that some of the corpses were victims of execution in Chinese prisons. The evidence does not seem to be especially robust, but it’s difficult to find a treatment of it that contains any facts, let alone dispassionate reporting regarding them.

All critics, regardless of the nature or orientation of their issues with the exhibit, seem convinced that von Hagens has nothing more in mind than cheap thrills and exploitation. It is very difficult for me to reconcile these simplistic condemnations with the richness of my own experience of it (and the apparent richness of the experience not just of my companions, but of the vast majority of the visitors there at the same time we were). I feel like I absorbed very little of what was available for the taking, and it’s somewhat depressing that so many seem to have been able to reduce it to so little.