Viruses were first described as agents that were not retained by the unglazed porcelain filters that early researchers used to remove bacteria from solution. In 1898, scientists observed that the agents responsible for foot and mouth disease, as well as tobacco mosaic disease, were filterable. It was discovered that these agents would not grow unless cells were added to the growth medium. Serial dilutions of these infectious agents were performed to rule out toxins as the cause of symptoms. The failure of these pathogens to multiply in solutions in which bacteria were able to grow, as well as their dependence on host cells for reproduction, distinguished them from bacteria. At the time, these agents were called ultra-filterable viruses or poisons (virus is the Latin word for poison).

It was nearly 20 years before the first viruses infecting bacteria were described. They were named bacteriophage, which is Greek for bacteria eating. Today, these viruses are commonly referred to as phage. T4, which infects E. coli, is the most thoroughly studied phage. When bacterial lawns are infected with T4, clear patches are easily detected where the cells have lysed.

Is a Virus Alive?

The focal point of the debate surrounding viruses has always been the question: Are viruses alive? They have genomes, are capable of reproducing, they make proteins, they replicate their genomes, and have evolved over time. However, they cannot do any of this without a host cell. Viruses are therefore biological enigmas. They are considered obligate intracellular parasites that exist in a state of suspended animation until they infect a host cell.

Viruses range in size from 10 to 450 nanometers in diameter. Because they are so small, they have very few components, and must be precisely packaged. A typical virus consists of nucleic acid (which can be RNA or DNA and may be single or double stranded, circular or linear, fragmented or continuous) along with a protein coat known as a capsid. This capsid is highly ordered and generally consists of 1-3 repeating protein subunits. When fully assembled, these proteins form either spherical structures, or cylinders. Some viruses have an extra layer of protection known as an envelope surrounding the capsid. The envelope is a lipid bilayer that is taken from a host cell as the virus buds off and is released.

The most important part of the outer coat in terms of infection (whether protein or lipid) is signaling molecules. These signals are not released from the virus rather they act as homing beacons and attachment points for target cells. These protein signals are recognized by cell surface receptors located on host cells and tell the cell to admit the virus. Most viruses enter the cell via receptor-mediated endocytosis. However, some viruses are simply taken up through phagocytosis or fusion (only if enveloped). Others inject their genome through the cell membrane, leaving the empty capsid outside the cell.

Once inside the cell, the virus utilizes cellular machinery to replicate. Most viruses lack a polymerase, which is needed to copy the genome. Also missing from a virus are ribosomes and the golgi apparatus, which are needed for protein processing. Cells provide all of these for the virus, allowing them to be extremely compact. During an infection, viruses use the machinery needed to replicate while putting cellular processes on hold. There are several types of viral infection that fall into two main categories: Acute and Persistent. An acute infection entails rapid production of infectious virus followed by resolution and clearing of the infection by the host. Persistent infections may remain dormant within host cells for years without replicating. 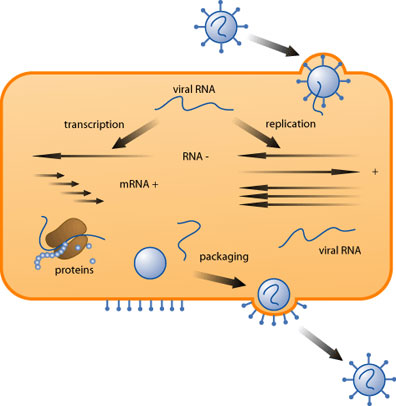 Figure 1. The replication of a coated RNA virus.

There are three requirements the must be met to ensure successful infection for both acute and persistent viruses: sufficient virus must be present, the cells must be susceptible and permissive to the virus, and local defenses must be absent. If those three conditions are met a productive infection can occur.

First, the virus attaches to the target cell, usually through specific protein-protein interactions between capsid and cell surface receptors. It is then internalized via endocytosis, phagocytosis, or fusion. Internalization can take anywhere from a few minutes to several hours to complete. Once inside the cell, the virus is uncoated in a process that frees the viral genome from its protective protein layer. The liberated genome is then transported to the nucleus.

During an acute infection, the virus essentially hijacks the cellular machinery. Early genes are translated into protein, and replication of the genome begins. Next, the late genes are translated. Late genes are comprised of structural proteins, both capsid proteins and those that aid in packaging but are not a part of the packaged virion.

Following the build-up of late gene products, the genome is packaged into its capsid and is ready for release. Non-enveloped viruses generally cause the lysis of the cell, allowing the virus to spread to neighboring cells. Enveloped viruses may bud off continuously for a period of days before killing the cell, or triggering apoptosis.

A typical example of an acute infection is the influenza virus infection. Infection begins in the upper respiratory tract after inhalation of aerosolized virus particles. The virus replicates in the epithelial cells of the respiratory tract and releases progeny virus to neighboring cells. Infectious virus can be present for as many as seven days, but generally peaks on the fourth or fifth day following infection. Symptoms of infection suddenly appear 48 hours after initial infection and last for approximately three days before subsiding. The infection itself typically resolves within a week.

The course of a persistent infection can vary once the virus has entered the cell. A latent persistent viral infection has three characteristic features: the viral genome is replicated in conjunction with host DNA; expression of viral genes is absent or inefficient; the viral genome remains intact so that an acute infection may occur at a later time.

During a latent persistent infection, the viral genome enters the nucleus and may either become an autonomous chromosome, or be integrated into a host chromosome. Only a few viral proteins are made. In the case of Epstein-Barr virus, these proteins are actually required to maintain latency. It is unclear how latency is established and maintained for other persistent viruses.

In order for latent viruses to persist however, they require a mechanism for reactivation. Reactivation generally follows trauma or stress, which may weaken the immune system. The exact triggers, however, remain unknown. At the time of reactivation, the viral genome behaves identically to that of an acute virus. The genome is replicated and progeny virus are assembled and released.

Two viruses that produce persistent latent infections are Herpes Simplex virus, and Epstein-Barr virus. It is estimated that 20% of the population harbors latent herpes simplex virus in their peripheral nervous system and will experience a reactivation in their lifetime. Epstein-Barr virus establishes latent infections in B lymphocytes and is estimated to be carried by 90% of the world’s population. When the virus is activated in someone with a functionally normal immune system, the result is infectious mononucleosis.

Usually, when a person becomes infected with a virus, the infection will resolve without the aid of medications. This is particularly true of influenza infections. However, there are viruses that our immune system needs help to fight, such as hepatitis and HIV. The most well known antiviral drugs (such as acyclovir, Azidodeoxythymidine (AZT), and protease inhibitors) are those used to fight HIV.

Figure 2. AZT is an analog of thymidine. The N3 group does not allow the continuation of DNA synthesis, effectively preventing viral replication.

The basic idea behind antiviral drug development is to target processes that occur only in infected cells. In the case of HIV, infected cells contain enzymes that are not coded for in the human genome. The most obvious of these is reverse transcriptase, another is a novel enzyme known as a protease.

HIV is a retrovirus, which means that it contains an RNA genome that must first be translated into DNA before the genome can be replicated. Cells are incapable of performing this task as they only have enzymes that allow transcription from DNA to RNA and then translation of RNA into protein. To circumvent this problem, HIV carries its own reverse transcriptase with it that allows RNA to be transcribed into DNA. This is a perfect target for antiviral drugs such as AZT.

AZT is a nucleoside analog, which means it resembles one of the nucleosides normally found in DNA. The difference between thymidine and AZT is a single substitution of an OH group with a N3. This substitution happens to be at the 3′ end of the molecule, which is critical for adding more bases to the DNA chain. Without the OH group, the next base has nothing to attach to, resulting in many small bits of DNA rather than a single continuous molecule. While AZT does not directly kill infected cells, it prevents viral replication thereby decreasing the viral load. Like most drugs, AZT is not perfect. HIV mutates fairly rapidly, which is a nightmare for pharmaceutical companies. Drug-resistant strains appear almost as soon as new drugs are introduced. HIV appears to be winning- at least for now.