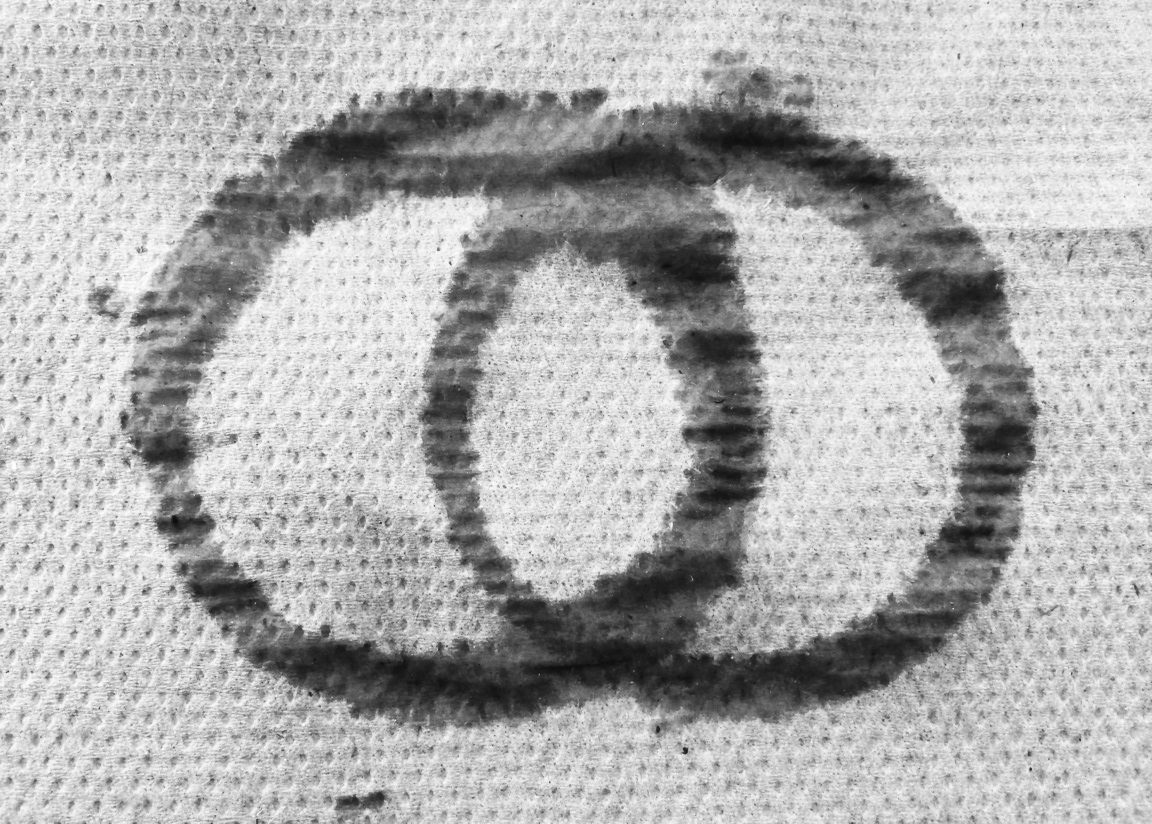 Venn’s been working on this for years. With the convention drawing close, his pace accelerates. Late nights. Early mornings. Lost sleep. Mid-day coffee.

In the earliest fraction of morning light, his wife leans against the kitchen counter, sipping the day’s first mug of coffee. “Are you ready, darling?” The lip of the cup reaches her mouth. A shy smile of shared giddiness opens toward him.

“Of course, Lil,” he says, drinking his orange juice. “Never so much as now.”

He sets the juice cup on the counter. “Does this tie go with my suit?”

“Does anything not go with gray, dear?”

She leans up to him and adjusts the half Windsor. He picks up the glass and takes another drink, returning it to the counter.

“Oh dear, please, use a coaster,” she says. Two rings sit visibly on the table, the first set off by the overlapping second.

With one hand, Venn takes a final gulp before re-setting the glass a third time, then grabs his briefcase, overcoat, and hat, flipping the hat onto his head in a single graceful motion. With the other, he scoops up the folded easel by the door and an artist’s tube with rolled posters. He gives Lil a peck on the cheek and imperceptibly pauses, thinking of all these years between them, just the two of them, then breaks from the daydream and heads out the front door to the train station three blocks down, the wind fighting for his jacket, the sun fighting the horizon’s hold. In forty minutes he will be at the Convention Center. Venn realizes this is his last hour of obscurity. This is it.

The train is typically crowded today, though Venn’s thoughts are elsewhere. Men stuff their heads in the daily news, overcoats reach to the floor, three then four stops come and go without delay, and all the while Venn stares askance absently. Time evaporates, circles filling his head, and the train pulls in. A now gentle breeze persists as he exits the train station midtown, quietly walking out and beyond.

Venn turns to the avenue, approaches the convention center across the street, and stands in awe. Stepping to it both wide-eyed and confident, he finds high ceilings and vast displays, glorious, Cathedral shafts of light beaming in from the eight-story windows above, an epic old train station redefined as a grand meeting hall, an arcade of modernity, what seem like acres of booths and tables and exhibits and air. This is better than a World’s Fair, it’s bigger than he’s ever seen, and here he is, at the precipice.

Busy people brush by, scurrying to walk in and set up their own displays. They are all so earnest in their busy-ness, full of importance in their demeanor, in stature, in hat and briefcase. “These are diagrammers,” Venn says out loud to nobody in particular. He looks out and up, hands on his hips, legs parted slightly. “These men diagram.”

Walking to the registration desk across the way, Venn can’t help but reflect on his place. The four square chart was first introduced here decades ago now. The famous Four Square. The Ladder, the Spiral, the Cycle. The Block Diagram! One square dictating a step in a process, followed by a fat arrow pointing to another big square, itself labeled with a task, followed yet again by another fat arrow, and then, this is remarkable to Venn, and then sometimes the fat arrow loops around and turns back to an earlier block. It’s that return that gets him. The way it brings him back.

He tries not to lose himself, but what could that even mean here, in this place. Venn accepts the swelling flood of formative memories now flowing through him, that childhood weekend to the unveiling of The Block Diagram, when Father took him on the Zephyr. He got licorice and a malt and sat by the window and felt right then that life was for the encircling. That ride, those diagrams, effervescent childhood, all entwined in his barnstormed mind. The memories return him to the reality of that long-lost time, so much a mirage now, when Father was still present and the future was distant and it was yet possible to think about bringing everyone together, about uniting.

If only there was a visual representation that could capably do it.

The registration table is a clattering of clicking pens. Those in charge look past him from their recently un-stacked chairs. He senses lines blurring by as he stands still, drawings from the past floating across his head, tables, charts, graphics, all those meek relatives to the stalwart diagram. How does one put ideas into symbols, how do we combine, merge, unite, what are we if not all diagrammers-in-the-making searching for a simple way to overcome the disparate inklings of our own scattered inner selves? Finally, lost in his own longings, a voice connects with him….sir, sir…”Can I help you sir? Sir can we help you please?” A gray hair with tags pinned to her lapel announcing “Registration” snaps for his attention.

“Your name sir? Please, we’re very busy. As you can see.”

“No. I am Venn.” He then asserts himself, remembering that he is in fact Venn, he is Venn the Diagrammer. He is here to take over this hall. He will bring together all of the peoples of the convention, he will show how they all share common interests, he will bring people together. This is what his preacher tells him is a calling. This is what he has come to do. He is Venn.

The woman rifles through a stack of pre-registration forms to find the sheet, “Venn. Here you are sir. Please sign here. It looks like we have you setting up over in the third quadrant. Enjoy your convention, sir. And remember to return the placard when you leave.” The chatter of the table fades as Venn turns to step with hard sole shoes toward his set-up point.

Down three grand aisles and over four skinnier rows, Venn finds the designated spot. It is but an x taped on the floor at the corner of an aisle and a row. They have set a folding chair and a card table at the spot. The payout for the price of admission. He opens up the folding chair, sets up his own easel and, in a moment, is at the ready. This man of charts meant to illustrate thought looks out from this corner onto the wide aisle ahead. He is small amidst the scale of the building, so much air and light above him. He is small, but shafts of light find him and his place in the hall. Dust-speckled white light beams from all directions, an artificial, unintentional spotlight.

Venn leans to place the poster board on the easel at the same time he unbuttons his suit jacket. His hand pats down a still kept head of hair. He takes a breathy exhale. As his eyes stare from the floor to the air, as his mind allows one last fleeting thought about his childhood porch, Father, his Lil in their kitchen likely staring into that middle distance across an empty home as so often happens, as he allows the image to evaporate he catches the glance of a passerby, a women who pauses at the circles on the easel. After a few silent moments with a cocked head she manages to ask, “What, sir, what is that?”

A man from a Midtown firm catches his eye a moment later and joins the women, captivated by the trinity of circles. “How is it…what is…are they…they are overlapping, are they not, young man?” The visitor turns and signals to his partner across the way, waving him over. Now the crowd is three, then four, then ten.

A momentum builds at this small display. Here stands Venn, one man, a young diagrammer, tiny amidst the giants of diagrams, placed without thought at this far corner of the Great Hall in the shadow of Big Block Diagram, dwarfed in his exhibit by The Flow Chart, made to feel minute against the long row of Spiral Diagrams to his left. These famed visual representations command space and attention, they assert their dominance. They are colossal.

Yet within one half of one solitary hour the crowd has burgeoned by Venn’s corner. Not ten or twenty, not thirty or fifty, the crowd size is counted only by masses, as clamoring, burgeoning, a rising din of inspired shouts like the Stock Market floor.

Look at Venn smiling now, waving his pointer, emphasizing the connections in the middle. Look at him. He is emphatic. Look at the crowd. It is growing. Look at those in the back now, arching for a peek, yelling for those ahead to move aside. The noise of the hall must be concentrated in this one area, condensed around the public awakening of a grand scheme. Venn is young and small at the center of this din, but he grows mightier with each additional on-looker. His confidence had been warranted, he knew they would understand, he knew the diagram spoke for itself. He knew. He knew.

“Ladies, Gentlemen, please, please, there is room for everyone. What we have here are circles. Please note that they overlap. You sir, yes? A question from the man in the charcoal fedora? Why yes, quite, sir, that is quite by design. I mean for that part in the middle to highlight unity. I am a uniter. My name is Venn. This is my diagram.”

It continues on like this for hours and then more, easily through lunch, past the noonday sun, into the arcing shadows of the late afternoon and into the accomplished evening. The light passes from left to right across the convention hall floor, the foot traffic swells and finally abates as the fading white beams soon come in low across the aisles, the debris of fliers and papers and sandwich wrappers and sample diagrams and program guides littered all over the dry floor. The crowd feels to Venn like a receding tide, having rushed, now returning, the man at the center standing tall, a triumph counting his offers.

Later that night, after the drinks are drunk, the agents are gone, their calling cards stuffed in his pockets, the contracts stacked one over the other, he too joins the receding tide, rewinding as he does. The posters are re-rolled into their tube, the easel refolded, his head again be-hatted, the brisk, effortless glide of a train ride complete. A Young Venn went to the diagram convention. It’s then, later, that he arrives back home.

His lovely, having just untied the apron strings around her waist, goes back to the counter to clean up one last mess, the empty juice glass from that morning yet sitting. Venn peers in from the arched hallway door, a vision of Lil as silhouette, wanting his success to be hers, wanting to unite the overlap of his work, their home, that space by the dusty black basinet, he wants it to fill in their shared, unspoken emptiness. So much unsaid sits in the oblong middle between them. Lives overlap like that. Things will be better now. A Young Venn went to the diagram convention. They’ll fill the space.