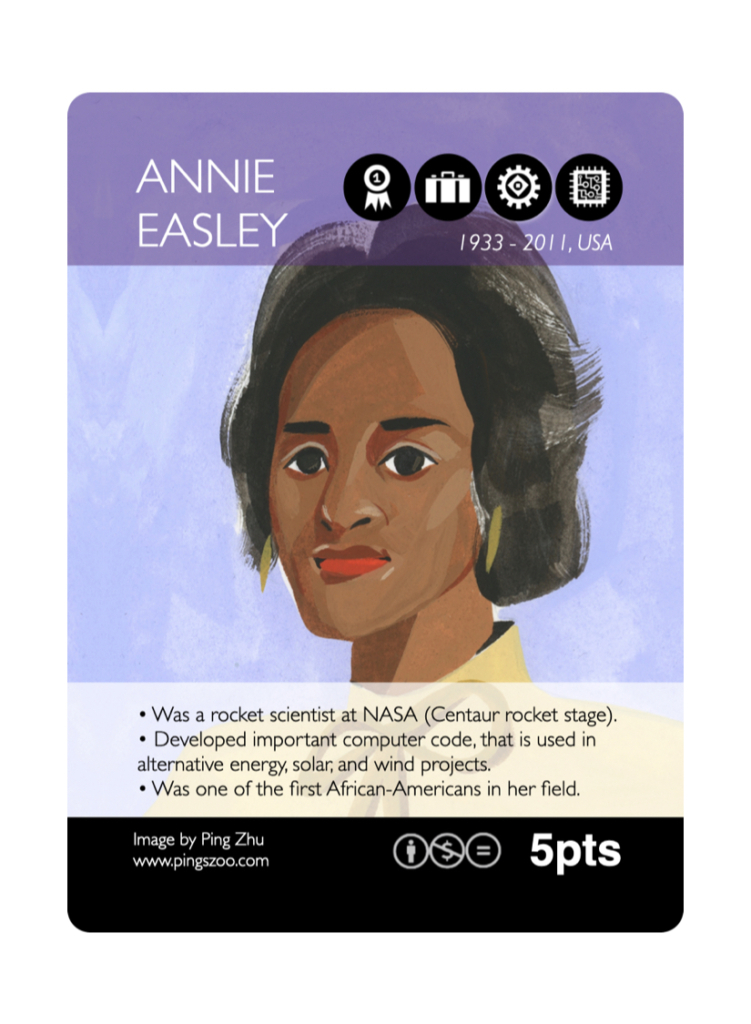 Annie Easley (1933 – 2011) worked for 34 years as a mathematician, computer programmer, and rocket scientist for the National Aeronautical and Space Administration (NASA), pioneering research that made modern spaceflight possible. If there was anything harder than rocket science however, it was overcoming the discrimination that Annie faced as an African-American woman of her time.

As a young girl, Annie’s mother taught her, “you can be anything you want to be, but you have to work at it.” Taking this advice to heart, Annie graduated high school as valedictorian at the top of her class, and was admitted into the pharmacy program at Xavier University of Louisiana, at a time where African-Americans faced extreme segregation. Upon marrying in her second year of studies, Annie left her program and moved with her husband to Cleveland, where she began her distinguishing career in 1955 with the aeronautics organization known today as NASA. While searching for a job, Annie stumbled upon the story of two sisters who were working as “human computers” with the organization. With a natural interest and aptitude for mathematics, she decided to apply, and within two weeks, became one of the only four African-Americans on the team.

Later, when actual computers replaced Annie and her colleagues, Annie adapted by becoming a math technician. While working full-time work with NASA, she earned a degree in mathematics from Cleveland State University in 1977; a degree which she had to pay for herself, as tuition was covered only for her male coworkers. Annie later became well versed in computer programming. Her research in alternative energy and conservation laid the groundwork for batteries used today in hybrid vehicles. The software she developed for Centaur, a high-energy booster rocket, was used to launch numerous spacecrafts and satellites, many of which still travel through space today.

In addition to her contributions to aeronautics, Annie played a vital role in the fight against discrimination. When literacy tests were required for African-Americans to vote, Annie tutored others on how to pass. Later with NASA, Annie became an Equal Employment Opportunity counsellor, advocating for not only African-Americans and women, but for all minorities. After retiring from NASA in 1989, Annie remained as a mentor to African-American women like herself. Although Annie passed away in 2011, her inspiring story and legacy live on, here on earth and beyond.

Card art by the awesome Ping Zhu. You can see more of her artwork at www.pingszoo.com/.

This Annie Easley card is part of the WWEST Women in STEM trading card game. You can download the game for free here, and watch the “how to play” video here. You can also purchase a professionally printed deck (at revenue neutral prices here). Full details about this STEM game and others, can be found here.