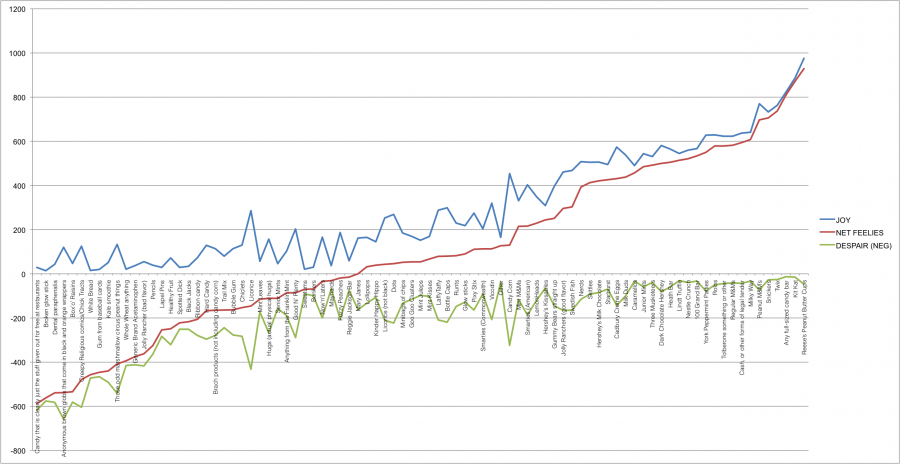 The world renowned “Candy Hierarchy” now enters a new phase of systematics to scientifically measure and classify Halloween Candy by assessing “joy induction.” From 2006 to 2013, Cohen and Ng were the PIs ranking candies as an ongoing longitudinal study – one that reassessed itself through the use of the traditional technologies (teeth, jaws, moxy) and robust scientific peer review (folks bitching via comments). This year, however, with the help of multiple undergraduate and graduate assistants, including one heartbroken cousin from Duluth (really, Kaitlyn was wrong for him from the start), the research team was able to collect pre-survey JC (candy joy) and DC (candy despair) data (see Cohen and Ng, 2014). This included the use of “multivariate quantitative techniques” for a more scientifically rigorous analysis (which must be fancy because of the eleven-freakin╒-syllables thing). This hierarchy therefore presents the newly calculated 2014 rankings, based on a total of 43767 data points obtained from 1286 individuals collected in a randomized fashion. Mostly. Specific notes of interest are five fold: (1) underpinning the whole study is the proposal of a new physical law of the universe, loosely defined as the “Net Feelies Axiom,” as measured by a JOY minus DESPAIR mathematical expression; (2) the more rigorous 2014 data set obviously agrees with trends seen with previous rankings, with only the most minor of differences (i.e. we were right all along); (3) both candy corn and licorice exhibit high JC and DC numbers reflecting their significance in previous and present oral history data (people arguing); (4) that Mary Janes, having data that exhibits equivalent JC and DC values and therefore inhabiting the newly described “Petersen Inflex,” is likely a sign of some sort, if not spooky overall; and (5) Whoppers still blow.