Conversation in the biological world is quite natural. Even on the level of the cell, a busy broadcast of communications is occurring; a fact which has caught the attention of biologists. Today, one of the hottest areas in cell biology research is the study of ‘signal transduction’.

Signal transduction is the study of how a cell communicates [1]. Every cell is able to communicate through having evolved the ability to produce, recognize, interpret and respond to signals in its environment. The word ‘signals’ in this context refers to nothing more than chemical molecules that are floating around. Cells have learned to detect many of these chemicals. Their molecular detection components—produced by the genes they contain— allow the cells to converse in this chemical “language of the cell.”

When you come right down to it, this ability to communicate has allowed cells to evolve. If a cell could not receive or respond to signals from its environment, for example sensing food or predators, it would be unable to adapt its behavior, and over time, would be out competed by those that could communicate. Therefore, it does form a vital part of a cell.

Scientists studying how a cell communicates have learned some astonishing things about biology—one of the most important being that foul—ups in the process of signal transduction can result in disease [2]. Quite rightly, this observation has medical researchers determined to figure out why this happens? Research in this field is turning out information at a remarkable pace. Research findings are relevant to numerous diseases and the drugs used to treat them. As a result, medical science is intensely focusing its eye on the concepts and insights that this research is producing with the hope that it will improve our health. What is signal transduction? And why does it have scientists so excited?

Where did the term “Signal Transduction” Originate?

The term signal transduction is an umbrella term in biology. It is used to refer to a broad area of cellular biology research involving topics such as the chemical signals used by cells, how these signals are received, how a cell interprets them, and the ways in which cellular machinery can be used to respond [1].

“Signal transduction,” as a term, is quite instructive once its purpose and function are made clear. Essentially signal transduction ensures that a message can be converted from one form to another during its travels and still retain its original content. Let’s look at human communication as an illustration. Consider how a message is sent over the telephone: one person speaks into a receiver that converts the sound into an electrical signal, which can then be transmitted over great distances before being converted back into sound at its destination (see Figure 1). This process retains the original content of the message and is called signal transduction.

The signals sent by cells are far simpler than the highly complex messages used by humans. One cell—termed the signaling cell—produces a particular chemical molecule that is detected by another cell—the receiving cell—using a receptor protein that recognizes the molecule and responds specifically to it. The protein, acting as the receptor, is the first step in which the chemical signal present on the outside of the cell will be converted (transduced) to different signals inside the cell. These signals will subsequently direct cell behavior (see Figure 1). It is this conversion, a biologically evolved form of signal transduction, that is the essential element that allows a cell to communicate. Early scientists discovering this concept clearly understood its importance to cell survival and began using the term to refer to their research. Over time, it stuck.

The Components of Cellular communication

There are three basic components involved in how a cell communicates:

Lets take a closer look at each of the three components that comprise the “language of the cell [3].”

1. What types of signals do cells send?

Cellular signals are inorganic or organic chemical molecules that are simply floating through the environment. The list of signals that have been discovered numbers in the hundreds and grows longer every day. Some examples include proteins, peptides, amino acids, nucleotides, steroids, and gases [3].

Some of these signaling molecules (such as gases) are naturally present in the environment. The nitrogen gas used by some bacteria is an example of a naturally occuring signaling molecule. Other signaling molecules are basic constituents of living matter (i.e. amino acids) or biologically produced by the cells themselves (i.e. proteins). Even with the large variety of available signals, communication between cells in multicellular organisms can be grouped into just a few general types [4] (see Figure 2):

These four groups of signaling molecules form a gigantic repertoire of possible messages in order to facilitate communication. 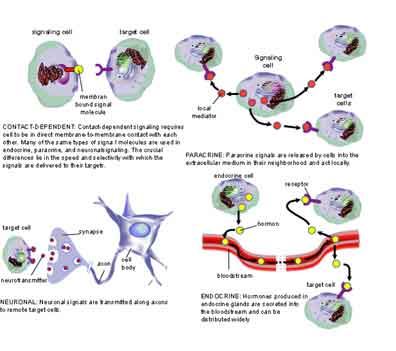 2. Communication is Funneled Through Receptors

How does a cell respond to a particular signal? Its ability to do this relies on the fact that a cell will only react to a signal if it has a receptor that recognizes that specific signal. Thus, a cell producing a limited number of receptors (based on its function) will restrict its responses to only those it needs.

The receptors that a cell does produce are normally displayed on its surface [4]. While displayed there, they are free to bind to a signal that they recognize [4]. This can be thought of as occurring in a fashion similar to a key (the signal) fitting into a lock (the receptor) [3]. Once this has occurred, the cell is considered to have received the signal, which will subsequently be transduced inside the cell into changes in behavior (see Figure 3). 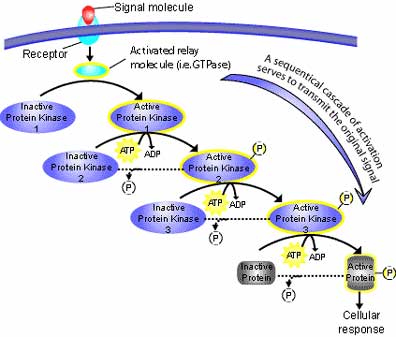 Even with a limited set of receptors, quite complex behavior can be produced by the reception of a signal. When a single message (one signaling molecule binding to one receptor) is received by a cell many things can change—the cell could begin crawling, change direction, switch from a flat shape to a round ball, begin using up its resources, or begin creating new cell machinery. A cell possessing even a limited number of receptors is still simultaneously sensitive to all the signals that it is able to receive. Multiple signals may act together to produce responses that a single one would not generate. Animal cells rely on multiple signals to direct their behavior. This is demonstrated by the large number of signals required just for a cell to survive, The removal of these signaling molecules will cause a cell to undergo a genetic program causing its death (a process called apoptosis). Extra signals are then required on top of survival signals to produce any additional desired behaviors in the cells (for example dividing or differentiating). The large number of signals provides an animal cell with complex and subtle behavior patterns.

3. Changing a Signal into Behavior

Signal transduction is often thought of more specifically as the intracellular signaling molecules that translate a signal into changes in cell behavior.

The processes involving these molecules begin when a signal outside the cell binds to a receptor on the surface of the cell (see above). The receptor is almost always a protein that triggers steps to generate a new signal inside the cell (potentially involving many additional components) [1-4]. Intracellular signaling molecules participate in passing the new internal signal along, a process referred to as an intracellular signaling cascade (see Figure 3). This beautifully evolved mechanism involves a sequential cascade. One protein, acting as a key, will fit into the lock of a second, thereby causing the second protein to act as a key for third protein. This pattern continues until the last key turns on some internal cellular machinery that creates a response. By this method, the signaling cascade physically transfers the signal from the surface of the cell to internal machinery in other parts of the cell. During the entire process the cascade is transducing the signal into a form that is capable of interacting with this cell machinery. The entire method allows a signal located outside the cell to be interpreted internally.

In the end, it is these three components (a signal, a receptor, and a signaling cascade) that comprise the cellular nervous system, which is responsible for controlling the behavior of cells.