(This is the second paper on a special issue on Wookiee science. You can read the first here). 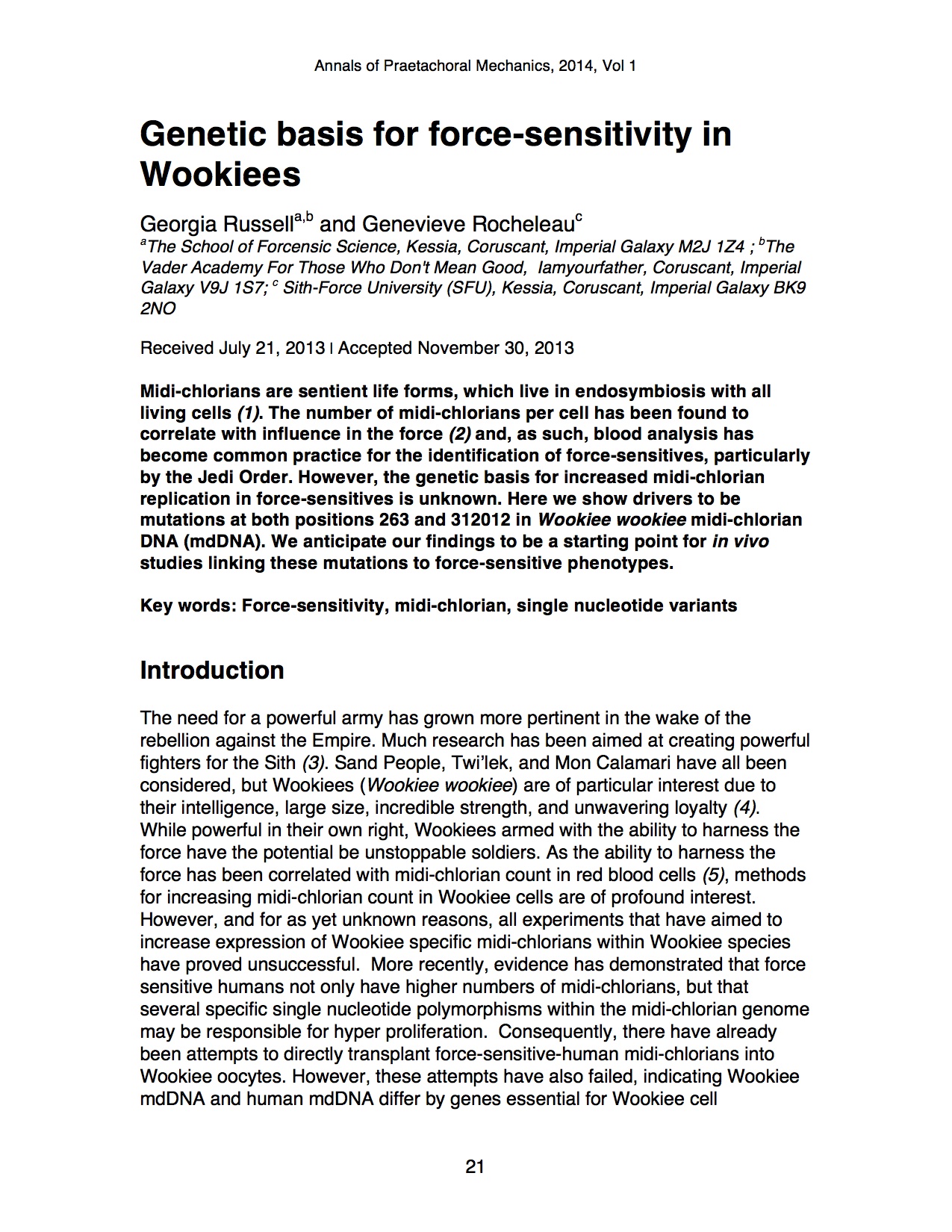 ABSTRACT
Midi-chlorians are sentient life forms, which live in endosymbiosis with all living cells (1). The number of midi-chlorians per cell has been found to correlate with influence in the force (2) and, as such, blood analysis has become common practice for the identification of force-sensitives, particularly by the Jedi Order. However, the genetic basis for increased midi-chlorian replication in force-sensitives is unknown. Here we show drivers to be mutations at both positions 263 and 312012 in Wookiee wookiee midi-chlorian DNA (mdDNA). We anticipate our findings to be a starting point for in vivo studies linking these mutations to force-sensitive phenotypes.

The need for a powerful army has grown more pertinent in the wake of the rebellion against the Empire. Much research has been aimed at creating powerful fighters for the Sith (3). Sand People, Twi’lek, and Mon Calamari have all been considered, but Wookiees (Wookiee wookiee) are of particular interest due to their intelligence, large size, incredible strength, and unwavering loyalty (4). While powerful in their own right, Wookiees armed with the ability to harness the force have the potential be unstoppable soldiers. As the ability to harness the force has been correlated with midi-chlorian count in red blood cells (5), methods for increasing midi-chlorian count in Wookiee cells are of profound interest. However, and for as yet unknown reasons, all experiments that have aimed to increase expression of Wookiee specific midi-chlorians within Wookiee species have proved unsuccessful. More recently, evidence has demonstrated that force sensitive humans not only have higher numbers of midi-chlorians, but that several specific single nucleotide polymorphisms within the midi-chlorian genome may be responsible for hyper proliferation. Consequently, there have already been attempts to directly transplant force-sensitive-human midi-chlorians into Wookiee oocytes. However, these attempts have also failed, indicating Wookiee mdDNA and human mdDNA differ by genes essential for Wookiee cell proliferation (6). As a result, more advanced genetic techniques, and elucidation of midi-chlorian genome structure, are required to increase midi-chlorian count in Wookiees.

Collection and Preparation of Blood Samples
mdDNA was isolated from blood samples as previously described (14). Briefly, blood cells were lysed by incubation with SDS and Protenase K, and then whole-cell lysates were subject to CsCl–bisbenzimide gradient centrifugation. CsCl–bisbenzimide gradients allow for separation of nuclear DNA from mdDNA based on A + T content (mdDNA is A+T rich). DNA quality was assessed by spectrophotometry (260 nm/280 nm and 260 nm/230 nm absorption ratios) and gel electrophoresis prior to library construction.

Midi-chlorian DNA Extraction
1ng input mdDNA was prepared using Nextera XT DNA Sample Preparation Kit (Illumina). Samples were barcoded with a 13bp unique index on each end to allow for analysis of 96 samples per flowcell, while maintaining coverage of >10000x per midi-chlorian genome. Libraries were sequenced with 2×150 bp reads on the Illumina JediSeq 2000 system.

Synthesis and Isolation of Midi-chlorian Genome
The Gibson et al. assembly method (9) was used to generate a synthetic midi-chlorian genome. It was important to minimize genome manipulation during the detergent and proteolytic enzyme treatments by suspending the cells in agarose blocks. Intact chromosomes were immobilized in the resulting cavern in the agarose that originally held the cell. Digested protein components, lipids, RNAs, and sheared genomic DNAs could then be removed by dialysis or electrophoresis from the immobilized intact genomic DNA. Whole, intact genomic DNA isolation was performed using a CHEF Mammalian Genomic DNA Plug Kit from Bio-Rad (7).

Isolation of midi-chlorians
Human and Wookiee blood samples were centrifuged at 600xg for 15 minutes to pellet cells. Cell pellets were resuspended in PBS to a final concentration of 1×108 cells/ml. Cell suspensions were lysed by forced movement through a 27G syringe needle, in the presence of a protease inhibitor cocktail (Roche, Germany). Crude cell lysate was incubated with 30ul anti-MATR microbeads for 60 minutes at 4°C. Treated lysate was loaded onto preequilibrated MACs column (Milyenyi Biotec). The column was placed in a MACS Separator (Miltenyi Biotec) and then midi-chlorians were washed and eluted according to Hornid-Do et al.’s method (8). Midi-chlorians were then pelleted and resuspended in MdIB (Midichlorian Incubation Buffer, Sigma-Aldrich).

Real-time PCR
Primers and probes were designed using Primer 3, and checked for possible hairpin and self-dimer formation using IDT Oligo Analyzer 3.1. swBLAST was used to ensure specificity to the target of interest. Assays were validated, both in singleplex and multiplex, using dilution series of purified Wookiee mdDNA and purified Wookiee nuclear DNA (supplemental). 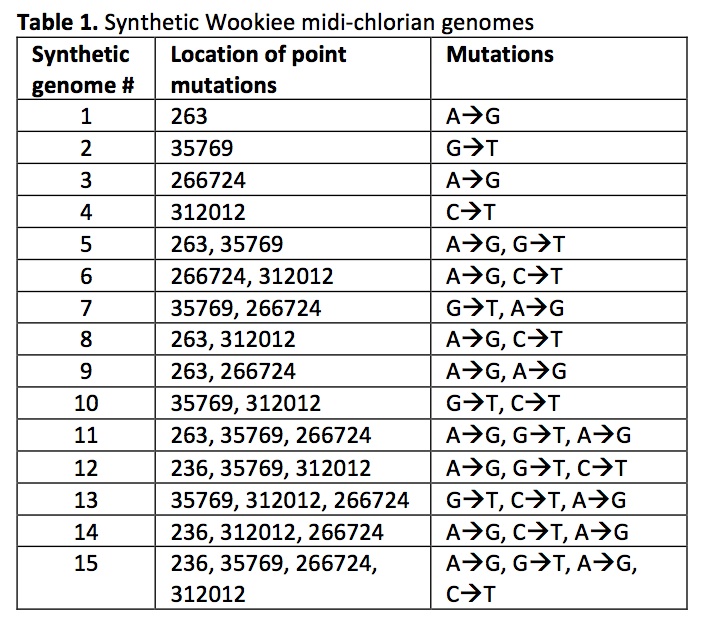 Determination of Midi-chlorian Production by qPCR
Single CHEW5 cells containing midi-chlorians with synthetic genomes (SG), and control CHEW5 cells, were placed into wells of a 96-well plate and were cultured as described previously (6). Five replicates of each were seeded. At 6, 12, 24, 48, 72, and 96 hours after seeding, 2ul of each culture was extracted, lysed (Cell-md Direct Kit, Darth Distributors), and used as template in a two-colour qPCR assay. An assay specific to the constant region of Wookiee mdDNA (WOMDC) was used to assess quantity of midi-chlorians (VIC channel). To account for differences in cell proliferation among cultures, an assay for GAPDH, a housekeeping gene on Wookiee nuclear DNA, was used (FAM channel). The difference in cycle threshold values (ΔCT) between WOMDC and GAPDH assays was used to compare midi-chlorian replication (Figure 1). 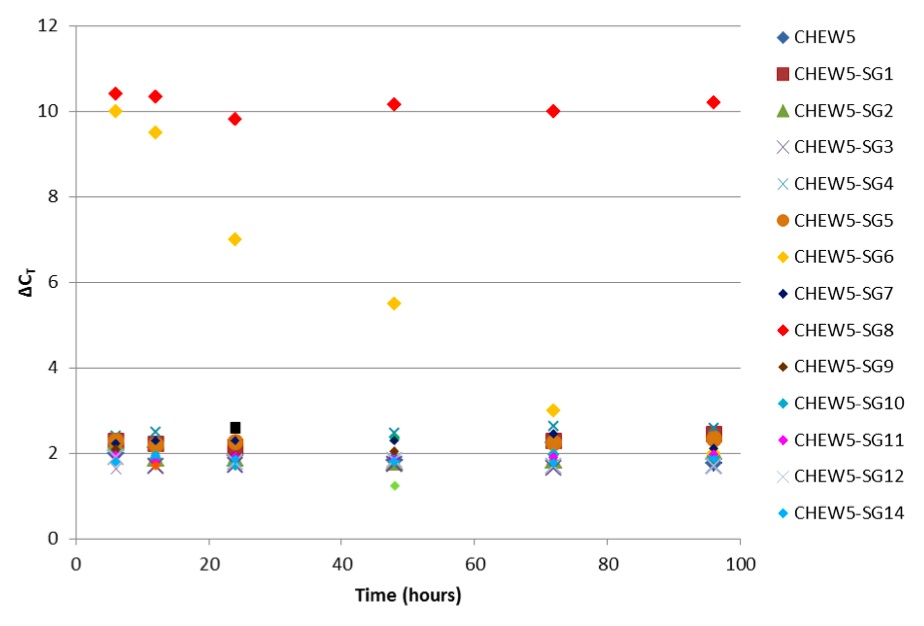 CHEW5-SG13 and CHEW5-SG15 mutants were not viable. Of the remaining 13 CHEW5 mutants, 10 did not significantly differ from normal CHEW5 in their midi-chlorian replication behaviour (p= 0.67, t test). Both CHEW5-SG6 cells and CHEW5-SG8 cells demonstrated high per-cell midichlorian counts, but CHEW5-SG6 mutants appeared unstable, as demonstrated by a consistently decreasing ΔCT over the six time points.

Growth curves for CHEW5-SG8 and CHEW5 cells were obtained by OD600 (Supplementary Figure 4). The presence of the midi-chlorian containing SG8 in the CHEW5 cells does not appear to affect CHEW5 proliferation.

Midi-chlorians were extracted (see Methods) from each CHEW5-SG8 culture, lysed, and the total proteomes were analyzed on a 2 dimensional gel (Figure 2). The boxes highlight a single protein difference between the CHEW5 and CHEW5-SG8 proteomes. As expected this protein corresponds to one found in Sith midi-chlorian.

Figure 2 (Click to Enlarge). Midi-chlorian proteomic analysis. Two-dimensional gels were run using midi-chlorian lysates from (A) Sith cells (B) CHEW5 cells, and (C) CHEW5-SG8 cells. Standard conditions were used for the separation of protein spots in the first dimension on immobilized pH gradient (IPG) strips (pH range 4 to 7) and in the second, SDS-PAGE, dimension (molecular mass 8 to 200 kD) (10). Gels were stained with Coomassie brilliant blue G-250.