We are grand father-grand son duo emotionally intertwined like the two complementary strands of a DNA duplex. Unlike the weak H bonds in the biomolecule, our attachment is due to divine bonds strengthened by a friendship extraordinaire.

Farzaan, eight-year old grandson of the senior author, is a regular viewer of ‘Backyard Science’ shows on television. Some months ago he dared his grand father, a university teacher of plant cytogenetics to coach him perform molecular biology experiments in their home in Kolkata, India.

The kid had jeered at his friend-grandpa: “You bore me incessantly with your books and bla bla about ‘jeans’ (genes), ‘Diana’ (DNA), ‘rana’ (RNA). C’mon, shut up and play with me now”.

Grandpa couldn’t figure out the course of action; he didn’t want to distance himself with either Farzaan or DNA. Could DNA be a kid’s play, the Professor wondered! The oldie knew to perform experiments only in well-equipped labs! He was neither trained nor did he ever train his students for molecular experiments outside the laboratories.

It was a virtually impossible challenge for the professional cytogeneticist@ until he stumbled upon ‘The MacGyver Project: Genomic DNA Extraction and Gel Electrophoresis Experiments Using Everyday Materials’ [1] through a Google search of Do-It-Yourself (DIY) sites. “Oh, no that cannot be true”, was the professional’s first reaction.

He hesitantly tried the procedure and, it did happen. Wow, it could be play! He then, successfully extracted genomic DNA from a leaf of betel (Piper betle L.) known as paan chewed by many Indians including himself. Once successful with the MacGyver protocol, the present authors began playing the DNA game. Both were happy with the novel eduplay.

They found the MacGyver extraction procedure to be the most handy and amenable to home-kitchen experiments among several inexpensive protocols available online.

A bulb of onion (Allium cepa L.) is a preferred material for demonstration of genomic DNA extraction in most protocols. The duo thought of doing something different. They used an onion flower-bunch known as inflorescence instead and obtained a substantial yield of DNA .

The experimental details are essentially and fundamentally similar to many other procedures already out there. However, items available at home and indigenous materials available in the local Indian market were used.

Onion inflorescences attached to long stalks were purchased from a local vegetable vendor. The spathe (leafy wrap around the inflorescence) was removed. Flowers were, then, scraped from the tip of the stalk and put in a brass pestle for grinding.

One teaspoonful of water and a pinch of Tata® iodised table salt were added to flowers. The flower tissue was crushed by grinding and pulverised to make a viscous solution.

Two drops of Vim® detergent were added. The mixture was stirred gently with plastic ice-cream spoon for a few minutes.

The mixture was carefully poured in to a homoeopathic vial. Isopropanol, the rubbing alcohol, was slowly poured in the vial with an injection syringe to avoid disturbing the tissue suspension. Bubbles started rising almost immediately and in about ten minutes the DNA-cloud was seen between the mucky stratum of tissue-salt-soap mixture below and the clear alcohol layer above. DNA did not float as expected.

Absolute ethyl alcohol was added in place of isopropyl alcohol in our repeat experiments taking due care that all other steps remained unaltered.

A fascinating result was obtained (see figure below). Three vials represent the stages of precipitation and floatation of DNA. 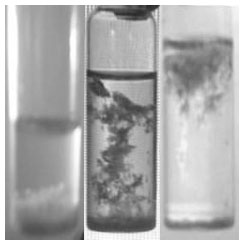 The duo embarked upon a series of genomic DNA extraction experiments with whatever uncooked live eatables they could lay hands on. The two generations, separated by 55 years, enjoyed every bit of what they did. It was another matter that each experiment left the home kitchen messier and the ladies angrier. It was play!

Both are now among the growing crowd of MacGyver Project-inspired scientists keen to wipe the psychological fear of Molecular Biology from the minds of all interested persons in homes, students in schools, young freshers in colleges and enterprising researchers in small-time developing laboratories anywhere in the world.

As well, the senior author has since standardized the protocol and has shown (in to-be-published work) that genomic DNA as obtained shows exact banding when electrophoresed alongside DNA obtained by standard ‘professional’ protocols and is of equal PCR quality. He is aware of the ethical debates about DIY Molecular Biology by anyone interested anywhere. However, he firmly believes that the outreach of Molecular Biology to outside of costly laboratories, as is the case with agricultural technology and information technology, shall attract billions of minds to understanding and application of New Biology to the well being of global citizens at low costs. He is including the inexpensive procedure in course curriculum and research project work of his current students. Good luck to all MacGyverites!