Fanboy: Hey gang! Did you read The Sword of Shanara? The characters traveled hundreds of miles described in excruciating detail for hundreds of pages, until they reached the ultimate battle between good and evil! Cool huh?

Scientist: Whatever. The characters in Red Planet traveled 48 million miles to Mars, while those in 2001 traveled 369 million miles to Jupiter. Characters in Asimov’s Foundation books travel millions of light-years all over the Milky Way galaxy in routine manner. Isn’t it amazing what people can accomplish when they don’t have to walk everywhere? Thank a scientist for your planes, trains, automobiles, and spaceflight whydontcha.

Fanboy: Yeah, but did you see in The Lord of the Rings when Gandalf fought the Balrog all the way down a really deep hole and then all the way back up to the top of a mountain peak!?!?

Scientist: Big whoop. The adventurers in The Core traveled to the very center of the Earth, fighting technological, natural, and human hazards all the way down and all the way back up to the Earth’s crust again. Characters in Fantastic Voyage and Innerspace fought their way all through the human body in microscopic form.

Fanboy: Ooookay… But did you see all those maps having to do with the Wheel of Time books? It’s a huge continent! Pretty epic, huh?

Scientist: Thpppt. Not. The film Contact opens with a satellite shot of Earth and pulls away, out of the solar system, out of the galaxy, and out to a view of many galaxies. The film Men in Black pulls out past many galaxies to many universes. Maybe you can find some flat-Earthers to impress with you dinky little maps. 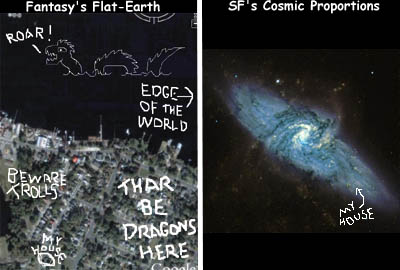 Scientist: No, that’s “we todd did.” (Say that out loud until you get it.) The film A.I. begins in our near future and then jumps 10,000 years ahead of that. And you know what? Things changed. Technology advanced incomprehensibly, society changed and its inhabitants evolved. Compare this to a bunch of dumbass Dragon Riders who never updated their swords to guns or dragons to fighter jets despite having millennia to do so? Dude, that’s weak.

Fanboy: The Balrog, Godzilla, and Dragons are really big. That’s got to count for something. Right?

Scientist: Whaddya want, a cookie? V’ger, from Star Trek, The Motion Picture, is so large that much of the movie is spent showing the Enterprise traveling through it. The living ocean in Solaris covers an entire planet. V’ger wants to find god. Solaris is so advanced we cannot even decipher it’s motivations. Colossal Science Ficiton beings, have much bigger aspirations than growling and smashing things.

Fanboy: There were thousands of monsters and people on the battlefields of Lord of the Rings. When Sauron is destroyed a volcano erupts and the earth swallows its legions of monsters. Now that was awesome! Am I right? I mean, am I right???

Scientist: (Rolling eyes) War of the Worlds reduced entire cities to rubble. Star Wars blew up entire planets. 2010 transformed Jupiter into a star just to thaw out Europa for life to evolve there. Your “epic” armies are kind of cute though.

Fanboy: Okay. Okay. Okay. I got one. In LOTR Arwen Evenstar’s father warns her that, as an immortal, if she abandons her elfin people, her mortal lover will eventually die and she will be alone forever. Forever! Top that Science Fiction!

Scientist: Bite me fanboy. In Science Fiction, all of the immortal elves would be cursed, as eventually the Universe would dissipate to an entropic state of absolute zero, leaving them frozen in total darkness forever, completely devoid of emotional, intellectual, or spiritual growth (Not too different from sitting through all 16-plus hours of the extended DVD version of Lord of the Rings). Sucks to be an elf.

In which we summarize the “chosen one” story line, a plot device that appears ubiquitous in almost all fantasy stories:

Someguy: I think he is the chosen one!

Chosen One: But I’m just some putz!

Everybody Else: He is the chosen one!!!

The Grand Poo-Bah: He has defeated the melodramatic personification of pure concentrated evil!!! Thus, proving his status as the chosen one!!!

Everybody: Hooray for the chosen one! Let’s party!

Chosen One: Hooray for me!

Fantasy sells. Bookstores and theaters are brimming with works of fantasy, be they Harry Potter, C.S. Lewis, Dragonology, Eragon, or Lord of the Rings. Science Fiction sales are in decline, while Fantasy sales are shooting through the roof.

C.S. Lewis (Chronicles of Narnia) and J.R.R. Tolkien (Lord of the Rings) were English faculty at Oxford. Robert Jordan (Wheel of Time) has a BS in Physics. J.K. Rowling (Harry Potter) has a BA in French. Christopher Paolini (Eragon) has no higher education as of yet.

These fantasy writers have inspired countless fans to stand in long lines at movie theaters and books stores sporting capes, light-sabers, and elf-ears, while endlessly debating which of their favorite trilogies is superior based on purely subjective criteria.

In contrast, David Brin (Uplift) has a Ph.D. in Space Science. Stanislaw Lem (Solaris) could not attain his medical degree because he refused to accept Lysenkoism, but did work as a scientific researcher. Dr. Isaac Asimov (Foundation) was a professor of biochemistry, Vice President of Mensa International, president of the American Humanist Association, and wrote hundreds of books on science, politics, and human improvability.

These science fiction authors have accurately predicted the future from cell phones to the Internet. They have contributed to the human race’s collective body of knowledge, and they have inspired countless others to do the same.

Science Fiction fans are intellectually engaged with their subject matter, taking the speculation beyond what is presented, and internalizing its vision to inspire their own accomplishments and contributions to society. Science Fiction walks alongside civilization, evolving and growing in potential as we grow and evolve as a society and a species.

Fantasy books use printing presses and desktop publishing software to glorify times when most people were illiterate. Fantasy movies use computer animation and special effects technologies to let people escape to worlds without films and special effects. Fantasy video games whisk players away to realms devoid of computers. Fantasy wants to delude us into thinking things were better, more exciting and morally clear in mythical ancient times without electricity, running water, toothpaste, toiletpaper, fast food, equal rights, aspirin, diet soft drinks, or any of the other myriad conveniences of modern life that science has betowed upon us. All fantasy fans have to look forward to is bigger swords, flashier magic, and more gruesome monsters. Fantasy is an intellectual dead end.

While fantasy broods on an overly idealized dramatization of the past, science fiction looks upwards and outwards to the future. As L. Ron Hubbard said:

[Science Fiction] is the herald of possibility. It is the plea that someone should work on the future. Yet it is not prophecy. It is the dream that precedes the dawn when the inventor or scientist awakens and goes to his books or his lab saying, ‘I wonder whether I could make that dream come true in the world of real science.’

Science Fiction argues that the best times lay ahead of us, but only if we make them happen.