ABSTRACT
So it’s come to this. Another year has passed and another Candy Hierarchy survey has been completed. Check that. “Candy Hierarchy” is what yahoos call it, but to us, it’s a deep dive into the Friday/Sunday question that has blessed our species since caveman times. Caveman times. We’ve taken a look at the data, and frankly, we don’t like what we see. Maybe it’s not all bad. Maybe. Let’s start with the good. Remember last year when a couple of plucky scientists who had overcome obscure forms of childhood adversity before finding their footing in a ne’er do well world with the help of wrong-side-of-the-tracks mentors established the Platinum Ratio as a way to describe Friday/Sunday preferences in humans? You don’t? Did you have to re-read that sentence too? Wasn’t that a terrible sentence? If you thought that was bad, then go ahead and read last year’s paper (Tonev & Cohen, 2015) [http://www.scq.ubc.ca/stratigraphical-analysis-of-friday-sunday-identification-in-relation-to-sugar-consumption-preferences-and-related-demographic-variables/]. It talks about what happened last year. We’ll wait. … … … You’re back? Good. Let’s go.

RESULTS and DISCUSSION
So this 2:1 Friday:Sunday preference ratio? It’s back too. Sort of.

We’re not quite at 2:1, but it sure is close. We do know that the Nobel committee doesn’t read primary sources, so we’ll just keep going with the 2:1 shorthand.

And this is where things take a dark turn. Tonev and Cohen (2015) pretty clearly confirmed that Friday was the preferred day of our planet’s youth (mean age: 35.7) whereas Sunday was relegated to those in the twilight of their licorice-filled lives (mean age: 37.8). If you’re doing the math, that’s 2.1 years different. Now brace yourselves.

Before you nerdballs start writing your angry letters about our interpretation of the above p-value as “marginal,” put away your slide-rules for a sec. You’re seeing what we’re seeing, right? It has been precisely 1 year since Tonev and Cohen published their groundbreaking 2015 paper and in that time Friday people have aged an average of 4.6 years whereas Sunday people have aged 3.6 years. We could obviously focus on the fact that Friday people are aging faster than Sunday people because we’re better at everything—that’s out there—but let’s put aside our differences for a moment and assess the impact of this accelerated aging. Best case scenario? We’ve got an arithmetic progression leading to the following projection: 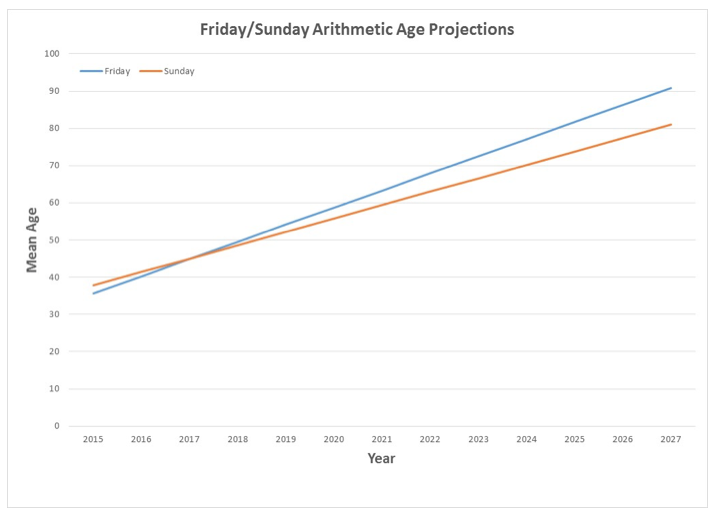 Remember when we said “best case”? Sure you do. It wasn’t more than five line ago. Let’s now turn our attention to geometric projections: 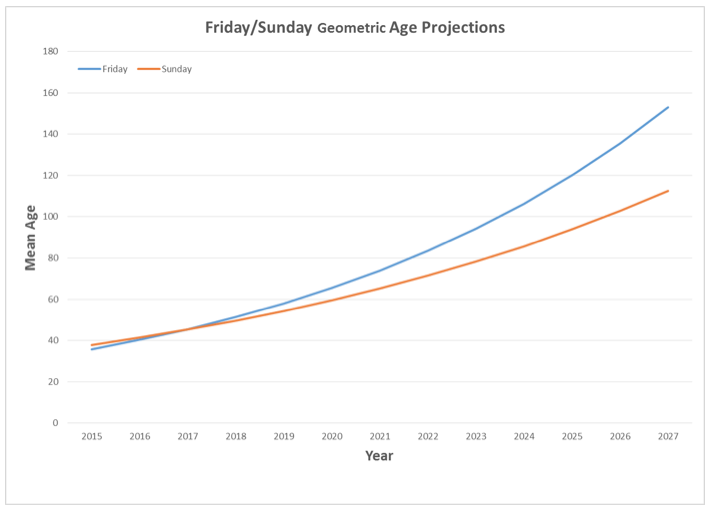 There’s an upshot. It’s this: The relentless progression toward death comes for us all, obscurely accelerated by our day-of-week preferences. We march at different rates, certainly. But we all march to our ultimate, unending sleep. Out out, brief candle.

Yeah death projections! Now on to the candy analyses!

One of the authors was unaware that the candy ratings would include a “Meh” category in addition to the traditional “Joy” and “Despair.” He’s pretty ticked-off about it too. Something about having to change his “SAS code,” whatever that is. In any case, he dealt with it by combining “Meh” and “Despair” into a single “Mehspair” category. It should be noted that one of the authors literally fell asleep while the other was explaining all this to him. So be it. We aren’t none of us perfect.

Sunday people prefer black licorice! Sunday people prefer black licorice! You’re seeing this, right? I mean: You. Are. Seeing. This. Tonev and Cohen (2015) made a full-sized-candy-bar big deal of this last year. Now science—being the ray of sunshine that it is—comes through with an honest-to-goodness replicated finding. There’s no replication crisis, we’ll tell you that. There’s an itty bitty chance we’ll regret saying this, but maybe if scientists stuck to studying iron-clad phenomena like the licorice preferences of Sunday people, science wouldn’t have its current public-relations issues around said replication crises. Better yet, Science (can we call you Sci?)…Sci, next time you want to inform the public of something, just let us do the talking. We’ll wear lab coats and wire-rimmed glasses. The whole deal. Oh, and before we forget, black licorice is terrible. Say that like Charles Barkley. Turrible. Turrible. Are there no limits to your depravity #teamsunday?

Yeah, there’s that. Sunday people, with your Sunday Truffles, and your fancy European chocolate, and your fat wallets, you make us sick, like when we get a box of Lindt Truffles and eat them all in one sitting sick.

My god, how pretentious are you Sunday people? Milky Way? Now you’re all about fancy astronomy candies? Aren’t you Neil deGrasse Tyson, aren’t you into big space things, studying the cosmos. Thanks, physics.

Look, we’re just a couple of humble near-scientists/real-podcasters so we’ll let history judge our contributions. But in case History needs a talking point or two, let us present our second replicated finding. Yes, we all know that Commonwealth Smarties are pellets of sugary, tooth-dissolving grossness, but that’s neither here nor there. This one puts the Replication “crisis” to rest. It was easy to spot, too. Commonwealth Smarties. We assume these are eaten by those who speak the Queen’s English? And you were trying to rebut our point that Sunday people were pretentious? When you see a Commonwealth Smartie and Sunday person just think: Hoity, meet Toity.

This one seems self-evident. Full-sized candy bars are better. Friday people are better. They hang out.